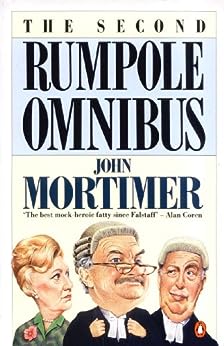 John Mortimer is a playwright, novelist and former practising barrister. During the war he worked with the Crown Film Unit and published a number of novels, before turning to theatre. He has written many film scripts, and plays both for radio and television, including A Voyage Round My Father, the Rumpole plays, which won him the British Academy Writer of the Year Award, and the adaptation of Evelyn Waugh's Brideshead Revisited.He has written four volumes of autobiography, including Clinging to the Wreckage and Where There's a Will (2003). His novels include the Leslie Titmuss trilogy, about the rise of an ambitious Tory MP- Paradise Postponed, Titmuss Regained and The Sound of Trumpets, and the acclaimed comic novel, Quite Honestly (2005). He has also published numerous books featuring his best-loved creation Horace Rumpole, including Rumpole and the Primrose Path (2002) and Rumpole and the Penge Bungalow Murders (2004). All these books are available in Penguin.He lives in what was once his father's house in the Chilterns. He has received a knighthood for his services to the arts. His authorized biography, written by Valerie Grove, will be published by Viking in Spring 2007. --This text refers to the paperback edition.

4.7 out of 5 stars
4.7 out of 5
141 global ratings
How are ratings calculated?
To calculate the overall star rating and percentage breakdown by star, we don’t use a simple average. Instead, our system considers things like how recent a review is and if the reviewer bought the item on Amazon. It also analyses reviews to verify trustworthiness.

Nikiforos V Fokas
5.0 out of 5 stars Erskine-Brown and Fink-Nottle.
Reviewed in the United Kingdom on 22 April 2020
Verified Purchase
There are at times clear literary salutes to P G Wodehouse in Mortimer's Rumpole. The stories are more short and succinct than Lord Emsworth or Bertie's convoluted travails, but there are broad similarities between these tales of the roaring twenties and early Thatcher eighties. Rumpole and Wooster share romps aplenty but back at home, both She Who Must Be Obeyed and Jeeves always have a secondary weightier matter to resolve, whether loose sofa covers or ukeleles.

Brilliant from start to finish, Mortimer has a 1st 2nd and 3rd Rumpole Omnibus to collect in addition to the unmissable 'Penge Bungalow Murders'. All are excellent additions to any fiction shelf.
Read more
One person found this helpful
Report abuse

Damaskcat
5.0 out of 5 stars The Second Rumpole Omnibus
Reviewed in the United Kingdom on 12 January 2015
Verified Purchase
This omnibus edition contains 'Rumpole for the Defence', Rumpole and the Golden Thread' and Rumpole's Last Case'. This is a marvellous collection of short stories and I have read and re-read it many times since it was first published. Rumpole is as ever on good form with various fallings out with 'She Who Must be Obeyed' - AKA Hilda Rumpole and plenty of disagreements with judges, especially with Judge Bullingham.

Rumpole is always in search of the truth and sees possible defences where other people may only see a guilty plea. There are some of my favourite stories in this collection including 'Rumpole and the Gentle Art of Blackmail' - which shows Rumpole dealing with a crime which he prefers not to touch if he can avoid it and 'Rumpole and the Dear Departed' in which he receives his instructions from beyond the grave.

I also particularly like 'Rumpole and the Genuine Article' in which the art world comes in for some scorn, and 'Rumpole and the Old Boy Net' which ridicules the idea that everyone from the same school should stick together in later life. 'Rumpole and the Last Resort' is priceless and shows Rumpole getting round the convention which stops barristers suing for unpaid fees.

Of the third selection in this volume I particularly enjoy 'Rumpole and the Official Secret' in which his brief is delivered in a safe and involves the number of biscuits consumed by Ministry staff. 'Rumpole and the Bright Seraphim' is a sober and thought provoking story which examines the question of loyalty and how far people will go to uphold it.

Many of the stories in this volume will make you smile but others do raise some disturbing questions and will cause the reader to think more deeply about the law and justice.
Read more
7 people found this helpful
Report abuse

BB
5.0 out of 5 stars It is a jolly good read and perhaps funnier than the first edition
Reviewed in the United Kingdom on 19 July 2020
Verified Purchase
After refreshing our memories of the TV shows of Rumpole, I bought both Omnibus editions as our library was in lockdown. They both caused a great deal of hilarity and were thick enough to last a few weeks.

R de Bulat
5.0 out of 5 stars Superb reading, again
Reviewed in the United Kingdom on 5 April 2015
Verified Purchase
Another collection of superbly written stories about the Old Bailey Hack, concentrating on Rumpole's seemingly relentless inability to get ahead. Back from retirement, under yet another safe pair of hands as Head of Chambers who has not half the wit or charm of our protagonist, Rumpole works his way up the the ironically titled "...Last Case." Can this be the end for Rumpole? You'll have to read it to find out, but you will not regret having to read these tales from the courthouse which are never less than entertaining if not actually instructive on the vagaries of life, law and She Who Must Be Obeyed.
Read more
One person found this helpful
Report abuse

Paul Carr
5.0 out of 5 stars Compelling stories and characters
Reviewed in the United Kingdom on 6 May 2021
Verified Purchase
John Mortimer’s story lines, and characterisations are compelling. The Rumpole character is larger than life, you expect to actually see him on the Gloucester Road.
Read more
Report abuse
See all reviews
Back to top
Get to Know Us
Make Money with Us
Let Us Help You
And don't forget:
© 1996-2021, Amazon.com, Inc. or its affiliates