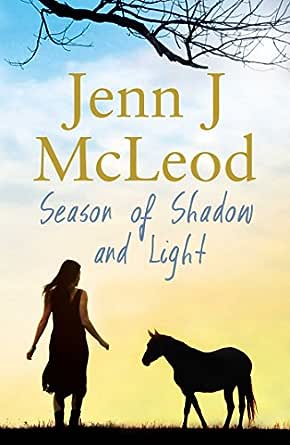 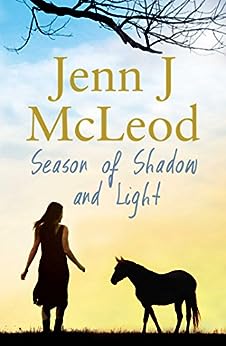 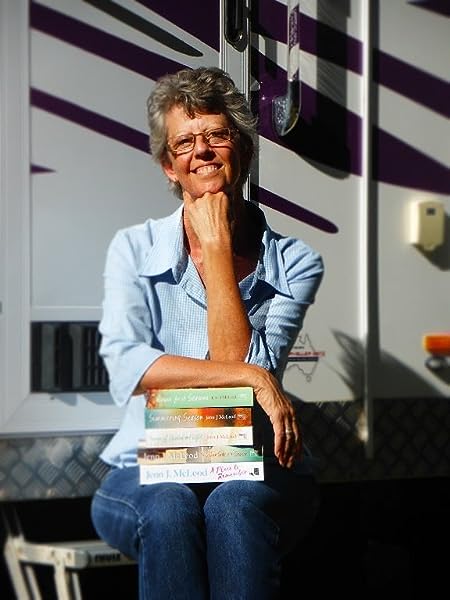 When Jenn J. McLeod quit Sydney’s corporate communications chaos, she bought a little café in a small town and ran a unique, dog-friendly B&B in country New South Wales. Home is now a fifth wheeler caravan, and her days are spent writing heartwarming tales of Australian country life that weave intricate tapestries of friendship, family, love, and contemporary issues. Readers and reviewers alike enthusiastically received Jenn’s debut, House for all Seasons, placing it at Number 5 on the 2013 Nielsen’s Best Selling Debut Novel list. Simmering Season is the second book in her Seasons Collection, followed by her third novel, Season of Shadow and Light. Visit Jenn at her website at JennJMcLeod.com, on Twitter @JennJMcLeod, and at her author Facebook page, Jenn J McLeod.Books.

illiterarty
3.0 out of 5 stars Book review: Season of Shadow and Light
Reviewed in Australia on 23 May 2015
Paige Turner is at a crossroads in her life. She packs up her daughter Mati and her step-mother Alice and takes a trip to the country, leaving her husband behind. She's hoping to find something about her past, about the mother she lost as a young girl. But has she bitten off more than she can chew?
The story:
Paige Turner had everything going for her; the job of her dreams, a handsome, hardworking husband, and a little daughter. When she got pregnant again it was like a dream come true, except she kept pushing herself, ignored the warning signs, and ended up experiencing a debilitating stroke.

Her confidence shattered, job lost, Paige needed to re-learn how to do even the most basic things, and her nightmares started again – two am and a baby was being ripped away from her. She would wake, screaming and sweating and worried about her daughter. Her husband had gone from supportive to emotionally absent, and Paige was on the abyss.

Paige's daughter Matilda was commissioned to do a school project about a woman Mati admired, and she chose Paige's mother Nancy, who had died when Paige was little. Knowing hardly anything about Nancy's past, they stumbled across a photo of Nancy on a horse with a sign in the background signalling a particular location in northern NSW. Paige has always wanted to know more about her mother, and needs a break from Stephen. She convinces her adopted mother, Alice, to accompany them to the town, in search of answers.

They miss the turn-off to the town of Saddleton and end up in a one-horse town with all the roads blocked by floods, and Paige wonders whether or not the whole trip was a ridiculous idea. But sometimes, it turns out, you end up where you need to be, not where you intended.

Nancy had tried to bury her old life. Will the truth set her family free, or will it spontaneously combust three generations?

The style:
As readers of this blog will know, I love Aussie flavoured books, but am not really into epic romance. As Season of Shadow and Light contains both of those aspects, I will declare myself torn.

Season of Shadow and Light is written in the third person limited and mainly focusses on Paige, but occasionally switches to one of the other main characters (approximately four in total) to check their internal monologue and give a bit more dimensionality to the story. This device works well, in what is an epic tale about secrets and lies and families and whatnot. Speaking of epic tales, the plotting is excellent. The storyline has been well constructed and the meandering path it takes to get from a whole collection of secrets a couple of generations old to the revelation is masterful. It seems McLeod is the master of the red herring, and even though you can see what she's doing you don't know how she'll have things turn out. It really keeps the Paiges Turning (hilarious). Towards the end of the story I felt as though everything got wrapped up just a little too neatly, but that's one of the reasons the epic romance style genre isn't for me, so that's a personal preference. I did quite a bit of eye-rolling during the denouement though.

The characters are all pretty good also, and the setting is gorgeous. Give me an authentic Aussie setting I don't like and I'll be surprised, because I'm a real sucker for it. The characters and the small town are well portrayed, three dimensional, and while occasionally erring on the side of stereotypical, well, sometimes small towns are like that. The main characters are not without their flaws, which is important, although sometimes I wanted to punch Paige in the face. It's not like you have to be best friends with the main character though.

My one complaint would be that there was an awful lot of telling in with the showing, as though McLeod was worried her readers weren't really getting what she was saying about her characters, so she had to keep giving internal monologue examples and rehashing character development and other devices. It felt like a tiny lacking of confidence in her own writing and also in the reader, and it's my personal preference to have to work for what's happening in a novel, so I started to find the telling vs showing a bit draining. The novel could have been a quarter shorter and much punchier, but by the same token I am not McLeod's target audience and maybe that device works for them.

Who is this book for?
Not me. I'm going to imagine it's for lay-dees around Paige's age and situation who want to engage in their own fantasies away from inattentive husbands, which is totally fine. Go nuts, ladies.

If you like this book, you would also like...
Have I got a treat for you guys released on the first of June. I'll keep you posted.

Michelle
5.0 out of 5 stars A fantastic tale of family, trust, love and new beginnings
Reviewed in Australia on 6 May 2015
I have only heard good things about the Seasons Collection and Jenn's debut House of all Seasons was one of our book club reads, one I unfortunately didn't read but have got on my towering TBR to get to. After having read Season of Shadow and Light I am even more determined to go back and read the first two in the collection.

Season of Shadow and Light is a complex story filled with secrets which make for some intense mystery that kept me guessing, some of those guesses made room for some hairy situations had they come to pass. It is a story of family, of trust, of betrayal and most of all of healing. I loved it from the very first page to the very last.

We have multiple story tellers, three for the most part but then an extra joins the ranks late in the piece, for a broad perspective and a much more insightful story. This method allowed us to see deep inside the story, and understand motivations that we may not have otherwise while driving the mystery and sustaining suspense. Yes, there were some predictable outcomes but there were some that took quite a bit of working out and many is it or isn't it moments all the while ensuring that not all the questions were answered.

Paige Turner has given herself a time out from her life and packed up her 6 year old daughter Matilda for a road trip. Perhaps a little rash, not completely thought out, but something she felt she had to do and when Alice couldn't talk her out of it she decided to tag along. The plan was to head to small town Saddleton with some half baked idea to find out a little more about her history because she knows very little about her mothers roots.

The dynamics in Season of Shadow and Light are not so much new but not often explored, it is becoming much more common now but this was a family dynamic that I was new to in literature. Paige grew up with two mothers in a time that it was far from common, and even further from socially acceptable so the fact that her history goes back no further than her birth is not that hard to understand. Nancy was Paige's birth mother, who passed away when she was a child, and Alice was her partner. After Nancy's death Alice took on the role as Paige's mother and that made life a little simpler.

The timeline jumps around a little which I did have trouble following at times because the characters seemed to wander off into their memories without notice, totally sidetracking a scene and there were times I wasn't quite sure if we ended up getting to the end of the scene in the present because we got so caught up in the past. Except for the fact that it confused me at times this helped to drive the story because so much was rooted in the history of these characters.

Lily Malone
5.0 out of 5 stars Small-town Story Masterpiece
Reviewed in the United States on 24 May 2016
Verified Purchase
What a lovely, thought-provoking story this was. Starting slow, then building to a complex web of family intrigue, friendships and relationships and how they bend and bulge and almost-break under times of extreme stress.
Paige lies to protect the people she loves. Her entire life is built around protecting people she loves. Does this mitigate the lie? For me, in this book, it did.
Congratulations on another small-town story masterpiece, Jenn J. I'm so glad I got to read this book before the new one, Other Side Of The Season.
Read more
Helpful
Sending feedback...
Thank you for your feedback.
Sorry, we failed to record your vote. Please try again
Report abuse

Kindle Customer
5.0 out of 5 stars Interesting
Reviewed in the United States on 5 July 2017
Verified Purchase
I really enjoyed this book. Feared it may turn out to be soppy but was pleasantly surprised.
Always love a happy ending though and the journey can only be described as interesting.
A good read.
Read more
Helpful
Sending feedback...
Thank you for your feedback.
Sorry, we failed to record your vote. Please try again
Report abuse