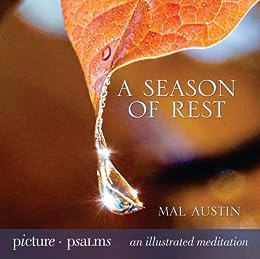 by Mal Austin (Author) Format: Kindle Edition
See all formats and editions
Sorry, there was a problem loading this page. Try again.
A new giftbook series by famed nature photographer Mal Austin. Mal Austin is from Australia and has combined his beautiful photography with text from the book of Psalms. The result is a combination perfect for a beautiful tabletop book that also serves as a devotional book designed to bring comfort, hope, and encouragement any recipient. A gift page will be included, making this a unique gift for many occasions.

Each book in the series features three to five different psalms carefully chosen to bring the reader closer to God through the words and the image paired with it, making this beautiful gift book a spiritual retreat for the soul.

Picture Psalms: A Season of Rest will partner the finest in fall photography with moving scriptures to give readers a refreshing time of quiet retreat.
Read more
Previous page
Next page

Mal Austin is one of Australia's most prominent Christian artists with a camera.
A former schoolteacher, Mal now devotes his time to capturing the beauty of
nature and crafting it into posters, gift cards, calendars, and books.

Eighteen years of commercial photography saw him complete over 650 weddings and
hundreds of family portraits and advertising assignments. In 2000, Mal began a
new photographic direction under the name of God-given works, believing God had
given him new works to do. He specializes in the use of a panoramic film camera,
and his work takes him deep into the Australian and New Zealand countryside to
capture many isolates with untouched landscapes.

Mal also works in close-up floral images with an emphasis on color, pattern,
shape, and texture. While some images used in this book are from large-format
Pentax and Bronica film cameras, most are digitally captured using Nikon D70 and
D80 cameras. --This text refers to an alternate kindle_edition edition.