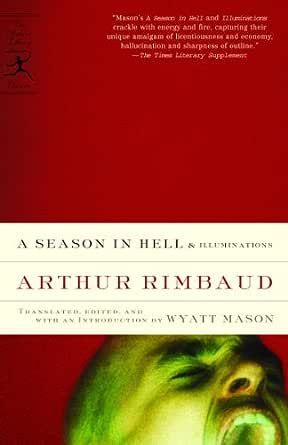 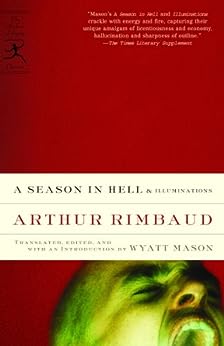 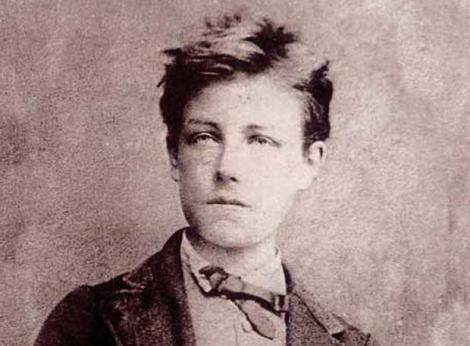 Translated, edited and with an Introduction by Wyatt Mason

“The definitive translation for our time.”
–Edward Hirsch

From Dante’s Inferno to Sartre’s No Exit, writers have been fascinated by visions of damnation. Within that rich literature of suffering, Arthur Rimbaud’s A Season in Hell–written when the poet was nineteen–provides an astonishing example of the grapple with self.

As a companion to Rimbaud’s journey, readers could have no better guide than Wyatt Mason. One of our most talented young translators and critics, Mason’s new version of A Season in Hell renders the music and mystery of Rimbaud’s tale of Hell on Earth with exceptional finesse and power.

This bilingual edition includes maps, a helpful chronology of Rimbaud’s life, and the unfinished suite of prose poems, Illuminations. With A Season in Hell, they cement Rimbaud’s reputation as one of the foremost, and most influential, writers in French literature.

Wyatt Mason is a contributing editor of Harper’s magazine, where his essays regularly appear. He also writes for The London Review of Books and The New Republic. The Modern Library has published his translations of the complete works of Arthur Rimbaud in two volumes. His translations of Dante’s Vita Nuova and Montaigne’s Essais are in progress.
click to open popover

Kelly Lemieux
5.0 out of 5 stars Proto-Surrealism Classic
8 February 2016 - Published on Amazon.com
Verified Purchase
This book is an old favorite that I've had in more than one edition over the years. It's a proto-Surrealism classic from the 1800s that kind of leads to Rock & Roll and Salvador Dali paintings. It's independent reading for hipsters for sure.
Read more

NAncy Whitehead
5.0 out of 5 stars gift
15 January 2014 - Published on Amazon.com
Verified Purchase
These titles were requested while at a book store. I chose this combined titles book. My spouse thought it being consolidated was fine.
Read more
One person found this helpful

Ryon Fuqua
5.0 out of 5 stars classic
12 August 2013 - Published on Amazon.com
Verified Purchase
Only made better knowing that a teenager wrote it and it became a greatly influential work for the symbolists of 19th century French poetry. Its really pretty amazing. The translation is really good, or at least seems that way to me. I don't read French, so I don't have a feel for the real translation, but Wyatt Whats-His-Name really brings some flavor to it. You can tell at some times that the language isn't original, but it still feels like "Translator Wyatt" has captured something genuine about the manuscript. The history of "Illuminations" is very interesting as well. Worth looking into as it will enhance your enjoyment of the literature.

Seasons in Hell is a great read too. Felt I was going a little insane while reading it (in a good way). Highly recommended.

The wikipedia page for this cat is really remarkable. Not the beginning where they outline who his dad was and his early life and whatnot, but the section simply labeled "Poetry". It outlines his philosophy, which turned out to be a bit of self fulfilling prophecy for him, who, in case you haven't realized, is one of the great poets of all time. The bit of his life with Verlaine is pretty intriguing in a Jerry Springer sort of a way too, but there is some significance to that era that can't be overlooked in terms of who he was and who he became.

Read it and love it. It's a hell of a rabbit hole.
Read more
2 people found this helpful

liamarcus cousins
5.0 out of 5 stars Poetry rarely gets better
12 July 2017 - Published on Amazon.com
Verified Purchase
If you want to know where most great songwriters learned much of their craft, read Rimbaud. A veritable orgy of imagery.
Read more
One person found this helpful
Go to Amazon.com to see all 7 reviews 5.0 out of 5 stars
Get FREE delivery with Amazon Prime
Prime members enjoy FREE Delivery and exclusive access to movies, TV shows, music, Kindle e-books, Twitch Prime, and more.
> Get Started
Back to top
Get to Know Us
Make Money with Us
Let Us Help You
And don't forget:
© 1996-2020, Amazon.com, Inc. or its affiliates