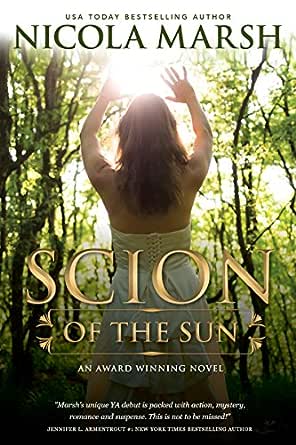 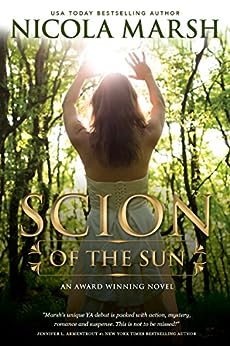 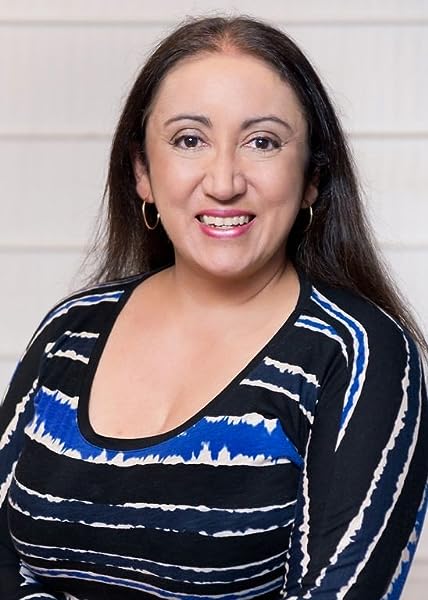 Scion of the Sun Kindle Edition

""Charmed and drawn in by Holly's spunk and snark, "" Scion of the Sun "will leave you spinning and falling for Joss right along with Holly. Marsh's unique YA debut is packed with action, mystery, romance and suspense. This is not to be missed!" Jennifer L. Armentrout, author, "" Obsidian" --This text refers to an alternate kindle_edition edition.

Nicola Marsh is a former physiotherapist and the bestselling author of dozens of Harlequin romance titles, including" Her Deal with the Devil," "The Tycoon's Dating Deal," and "What the Paparazzi Didn't See."She hasbeen a finalist forseveral awards, including the HOLT (Honoring Outstanding Literary Talent), Romantic Times Reviewers' Choice Award, Booksellers' Best, Golden Quill, Laurel Wreath, and More than Magic, and has won several CataRomance Reviewers' Choice Awards." --This text refers to an alternate kindle_edition edition.

kbirdlincoln
4.0 out of 5 stars like Sour Cream- Onion Lay's for the fun cheesy romance with the bite of Celtic mythology in a snackable, but not-sturdy YA
Reviewed in the United States on 6 December 2013
Verified Purchase
maybe closer to 3.5 stars, actually.

The author's description says she writes "fun and flirty" romance novels for adults as well. I totally can see this.

It's a fun and flirty YA book with your average paranormal-trope heroine who goes to boarding school and discovers she has secret powers.

No vampires or werewolves here. Instead Holly Burton is the youngest female descendant (Scion) of a Celtic Sun God (he whom Beltane is named after).

She goes to a normal boarding school and makes friends with a hot guy...and no...wait...that's part of what was fuzzy for me. The school has classes in crystal-gazing and telekinesis, and at one point the principal is mentioned as having a motivation to help Holly so she can prove once and for all that biokinesis exists...but when Holly tells one of her classmates she can teleport he acts like she's a crazy head.

So how much magic is accepted by the "normal" kids was a bit hard to get a handle on. Meanwhile, Holly's teleporting back and forth between the fuzzy-normal boarding school and another world where her bonded warrior, (boy two in the YA love-triangle) waits for her in order to train her to find the mysterious Arwen and face down evil big baddie Cadifor.

Coolness on the mythology. Not so cool on the training scenes. Firstly, instead of finding aforementioned mysterious Arwen (which Holly reminds herself she has to do at the end of like every chapter) her new scooby gang (Sun Sorority) makes Holly answer questions like "what is our culture" and "explain the significance of Beltane." Don't even get me started on the crystal class back at the boarding school where we learn about different stones and their effects on the psyche.

The whole bonded warrior thing was fun as a love-tension thing, and even though the warrior can read Holly's mind and knows she likes him, he's all like "no, we must concentrate on getting the Arwen and beating Cadifor--no time for love." This kind of blatant faux-impediment usually ticks me off, but warrior-boy is so broody and moody and has a twist in his backstory that causes real troubles with Holly, so I forgave him.

The scooby gang is explaining a whole bunch of confusing stuff to Holly and one of them says they "bamboozled" her (which I thought meant "to con")? And then there's the whole "Cadifor's consort" sprinkled throughout the book sometimes referring to Holly's estranged mother and sometimes to Cadifor's evil, male servant. I didn't get the feeling from the rest of the book that Cadifor was bisexual, but maybe I'm reading too much into it.

The romance includes kissing and some hand-skimming of midriff, so elementary school safe.

One of the most fun things is the meta-references to other popular series that various characters make. Harry Potter gets at least two shout outs, Vampire Academy, and even RPatz (read the book to find out who that is if you don't know, you are obviously no lover of vampires if you don't know). And Holly's voice is quite fun when she gets a bit snarky ("The thing I like less than the Lord of Darkness? Blood")

So for a fun and flirty YA boarding-school of special powers with heroine torn between two hot guys flavored with Celtic mythology, this is your book. As long as you don't mind being bamboozled by some of the world building.

This Book's Snack Rating: Sour Cream and Onion Lay's for the cheesy romance with the bite of Celtic mythology in a snackable, but not sturdily built YA paranormal
Read more
2 people found this helpful
Report abuse

Kindle Customer
5.0 out of 5 stars Young girl/premonitions/school for gifted......
Reviewed in the United States on 20 July 2015
Verified Purchase
A good story, epic battles, missing mother, grandma in coma, gifted school. A young girl learns the hard way she can astral project into another reality. When she gets back, she and her friends play pranks on a teacher. Then the young girl learns from another student she can use Crystal balls to jump her body to the other reality. It's was different. I think it ended to soon.
Read more
One person found this helpful
Report abuse

Amazon Customer
3.0 out of 5 stars Holy is Scion.
Reviewed in the United States on 31 December 2017
Verified Purchase
A high school drama adventure. Long in developing with questions a girl can not answer. A lot of studying, unknown​ powers and few friends.
Read more
Report abuse

C.A. Szarek
5.0 out of 5 stars AWESOME start to a new Series!
Reviewed in the United States on 9 March 2014
Verified Purchase
I loved loved loved this book. It had everything you love in a YA! Likeable characters, humor and hot boys! LOL! I love the references of all things awesome in books and movies, and I really loved Holly and of course Joss. I really can't wait for the second one!
Read more
Report abuse
See all reviews
Get FREE delivery with Amazon Prime
Prime members enjoy FREE Delivery and exclusive access to movies, TV shows, music, Kindle e-books, Twitch Prime, and more.
> Get Started
Back to top
Get to Know Us
Make Money with Us
Let Us Help You
And don't forget:
© 1996-2020, Amazon.com, Inc. or its affiliates