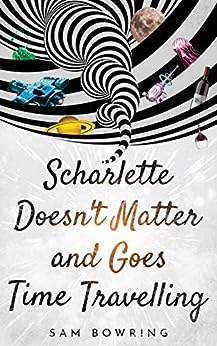 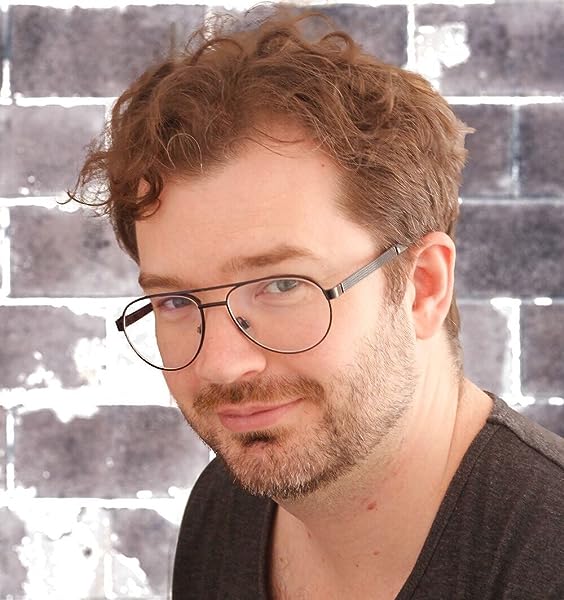 by Sam Bowring (Author) Format: Kindle Edition
See all formats and editions
Sorry, there was a problem loading this page. Try again.

Ever since Scharlette’s parents gave her a name no one can pronounce, she’s been stuck in a bit of a rut. She hates her job in airport security, making people take their belts off before they fly to exotic locations she can only dream about. She owns a small apartment with large repayments, drinks bargain bin red on a couch that swallows gym memberships, and misses her little sister – lost to an exploding sandwich press, ten years ago.

Scharlette fears she might live her whole life without doing anything or mattering to anyone. Still, it comes as quite a surprise when a handsome time traveller arrives from the future and tells her she is correct – that, according to his records, she doesn’t matter at all.

Scharlette doesn’t think this news is too wonderful, but as she soon learns – given she was to have no impact on the timeline whatsoever, she is free to blast off into outer space, and have amazing adventures with heedless abandon.

“The book is charming and riotously funny. The most enjoyable aspect of the story is its unpredictability.” – Aurealis Magazine

Scharlette rubbed her temples as she woke, hastily compiling information. She was in a spaceship, high above the Earth, speaking with Gordon, an advanced AI from the future. Or perhaps she was in an insane asylum talking to a mouse? It was difficult to be sure. One thing was certain – she was definitely going to be late for work.
‘Gordon,’ she said, and then so many questions jostled for attention she had trouble focusing on one in particular.
‘Yes, Miss Scharlette?’
‘What’s the time?’
‘I’m afraid that is quite difficult to answer, as perspectives tend to differ wildly. However, internal ship time is currently 64:38:91.’
‘Right.’
‘PM.’

“It’s hard to describe why this book is good without spoiling a single part of it.” – Two Doctors Media Collaborative

⭐⭐⭐⭐⭐ “a solid sci-fi romp, and this is one of the few times when "romp" is exactly the right description” – Goodreads

⭐⭐⭐⭐⭐ “absolutely the best treatment of time travel all wrapped up in chuckles and spurts of laughter punctuated with moments of sheer terror culminating in a very satisfying ending.” – Amazon US

⭐⭐⭐⭐⭐ “I loved this book much more than I had expected” – Goodreads

"In Scharlette, just the right amount of absurdity mixes with serious exploration of crazy scientific concepts. And the dialogue, description, scene-setting . . . it's all funny. It blew me away. Just go read it for yourself." ★★★★★ Two Doctors Media Collaborative

Sam Bowring began writing at a young age, and had his first book published when he was nineteen. Since then he has written a bunch of other books, as well as several stage plays and for various television shows. Sam also works as a stand-up comedian. He lives in Sydney, Australia. --This text refers to the paperback edition.

Hi there, I'm Sam, an author and stand-up comedian from Sydney, Australia. I've written across a variety of genres, as well as for a bunch of television shows. I was named after the family cat who, after I was born, was renamed Jack.

For my blog, comedy clips and other nonsense:

4.4 out of 5 stars
4.4 out of 5
393 global ratings
How are ratings calculated?
To calculate the overall star rating and percentage breakdown by star, we don’t use a simple average. Instead, our system considers things like how recent a review is and if the reviewer bought the item on Amazon. It also analyses reviews to verify trustworthiness.

Keith L
5.0 out of 5 stars Space time and humour
Reviewed in Australia on 31 May 2022
Verified Purchase
A great romping story with twists and turns to leave you wanting more. Add in humour and juicy references to sc fi classics to make a great story
Read more
Helpful
Report abuse

Tammy Tantschev
5.0 out of 5 stars Sassy caper through space and time!
Reviewed in Australia on 17 June 2019
Verified Purchase
Sam has built a complicated universe of space and time travel, yet the reader is guided seemlessly through these concepts without getting all turned about. In fact it's remarkably easy and enjoyable to follow. Loved finding such a relatable character in the wise cracking wine scoffing Scharlette. Just add romance, drugs, gun toting aliens and pages of effortless irreverant humour and you've got yourself this entertaining space romp of a book. Loved it!
Read more
Helpful
Report abuse

Wayne
4.0 out of 5 stars Funny Sci-Fi
Reviewed in Australia on 17 June 2019
Verified Purchase
This is some fun, smart sci-fi that's also pretty damn funny. It has a Douglas Adams flavour to it without trying to be Douglas Adams. It touches on some great points that get you thinking which I really enjoyed.
But if you like time travel, sci-fi and a laugh, you'll dig this book.
Read more
Helpful
Report abuse

Amy Leathem
5.0 out of 5 stars I had to read it twice!
Reviewed in Australia on 26 May 2020
Verified Purchase
This book is so unique. It’s basically a time travel, sci-fi, action, adventure, comedy mash up told from a female characters point of view. It’s fast paced, easy to read and is clever AF. I loved it so much I read it twice. If you don’t laugh out loud at least once there’s something wrong with you.
Read more
Helpful
Report abuse

ozjesting
5.0 out of 5 stars A delightful romp across time as if it didn't matter!
Reviewed in Australia on 6 July 2019
Verified Purchase
So much fun! A delightful and intrepid central character, non loopy time travel "science" and simply a whole lot of fun! I have been a fan of Sam Bowring for years. His fantasy work is great. Was a surprise well "timed" to see him try his hand at a whole new genre.. Read it, then go back in time and read it again for the second first time!
Read more
Helpful
Report abuse

Pagesbooks
4.0 out of 5 stars Time and space travel. What's not to like?
Reviewed in Australia on 16 June 2019
Verified Purchase
If Arthur Dent morphed into River Song, it would happen a little like this, with a lot of second chances and a good cup of tea. I'm going to reread, to make sure there really are no plot holes.
Read more
Helpful
Report abuse
See all reviews

33SouthTextworks
4.0 out of 5 stars 4.5 - Thumbs its nose at conventional scifi!
Reviewed in the United Kingdom on 19 June 2020
Verified Purchase
Really enjoyed this!

Scharlette's a bit of an everywoman - she's fully relatable. Cheap wine, job she hates, expensive rent payments, and having absolutely no impact on the world whatsoever. She's a little untidy, a little overweight, doesn't take care of herself, lacks motivation and... could really, at times, be me. (Except for the difficult-to-pronounce name, of course.)

The premise is excellent - that there are time-travelling agents in the future, protecting future events by protecting the past. Very TimeCop, quite Terminator - we all understand this one. However, no agents yet have a female time-ship called Gordon! Gordon's got to be my favourite character - with her own foibles, prejudices and sense of morals, she's as fleshed as any biped.

Bowring is a comedian, and comedy gold is evident in spades. Shrugging at scifi that takes itself too seriously, Bowring brings a wonderful sense of the realistically absurd to this novel. It flows like the Nile, runs rampant over realism, thumbs its nose at convention, and stomps on reality. This novel is a romp in every sense, and Scharlette discovers that not mattering can be the best thing ever.

I'm hoping this becomes a series. I could read more of these.
Read more
Report abuse

N. Harpur
4.0 out of 5 stars Funny, exciting and clever
Reviewed in the United Kingdom on 3 December 2019
Verified Purchase
A well conceived, clever and very likeable twist on time travel. Many of the classic paradoxes are dealt with in imaginative ways and Sam writes a surprisingly convincing girl as the lead character, I say surprising because there are several times when I could have easily though that Sam was short for Samantha, given the very believable 'female' characterisations. Well done that chap. The only reason I didn't give five stars was the occasional foray into (although quite 'comic book') blood and splatter, which I thought was not needed. The story line was exciting and page turning anyway and it felt a little like those moments were almost included because they are 'expected' of the genre.
But heh, actually not a 'biggie' and overall a really good book. I look forward to more.
Read more
Report abuse

Number 6
5.0 out of 5 stars Multiple timeline fiction - the sarcastic version
Reviewed in the United Kingdom on 7 February 2021
Verified Purchase
I have read a lot of science fiction and humorous books, along with more than a few that combine, or try to meld, the two. This book is fun and keeps its “science fiction” elements consistent throughout. It can also keep you wondering just how it will all be tied together into anything resembling a neat, unfussy and without breaking the novels “inbuilt timeline rules”. A very satisfying read. I look forward to seeing what develops in any sequel.
Read more
Report abuse

Kindle Customer
5.0 out of 5 stars Entertaining and Fast Paced
Reviewed in the United Kingdom on 27 November 2019
Verified Purchase
I love the contrast between Scharlett's boring life at the start and her adventures. There's never a dull moment and while there's a slight fairytale feel in her escape from the humdrum, she's a very believable character. The stakes are constantly ramped up but there's lots of fun and silly banter to make you smile too.
Read more
Report abuse

William Shannan
5.0 out of 5 stars Odd but good!
Reviewed in the United Kingdom on 19 July 2020
Verified Purchase
My favourite genre is comic fantasy/sci-fi and it's getting harder to find really fresh ideas and plots. This is definitely a slightly strange book with a very odd plot but that's what makes it so good. Some books you end up reading just to get to the end and are disappointing but this one you can't wait to read the next page. I highly recommend reading this book and I seriously hope there's a follow up, without giving any spoilers the ending is left open to more volumes. Excellent!!
Read more
Report abuse
See all reviews
Report an issue
Does this item contain inappropriate content?
Report
Do you believe that this item violates a copyright?
Report
Does this item contain quality or formatting issues?
Report