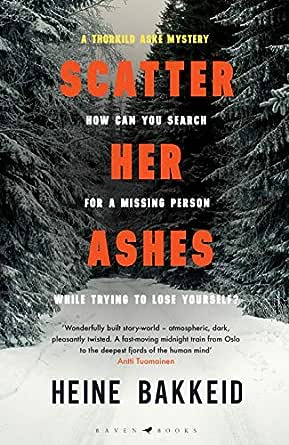 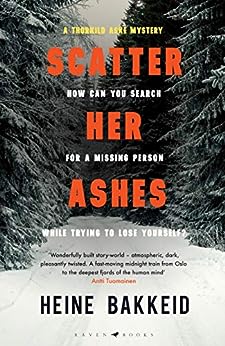 The second novel featuring Thorkild Aske in this brilliant, darkly funny crime series from a fresh voice in Nordic Noir

I loved Heine Bakkeid's first novel - I Will Miss You Tomorrow - and Scatter Her Ashes continues in the same creepy, atmospheric and darkly comic way -- C. J. Tudor

The first thing I noticed when reading Bakkeid's work is how snappy, darkly funny and addictive it is. He has such a skill of sucking you in, shocking you and entertaining you all in one chapter. No wonder he's being showered with rave reviews from authors and readers across the globe. I felt such a mixture of emotions for the character of Thorkild Aske, and that's all down to his creator, who nails characters to a tee. . Bakkeid is already big and his work is only going to get bigger and better. ― Daily Record --This text refers to the hardcover edition.

Heine Bakkeid grew up in the rugged landscape of northern Norway. His Thorkild Aske crime series is highly acclaimed by critics in his home country, and has earned him a reputation as a virtuoso of darkly atmospheric suspense.

Anne Bruce graduated from Glasgow University with degrees in Norwegian and English. She lives in Scotland.

Lagoon
5.0 out of 5 stars A damaged and alluring protagonist.
Reviewed in the United Kingdom on 23 November 2020
Verified Purchase
Thorkild Aske is sick. He knows it. After a suicide attempt left him brain damaged, he struggles with reality and is dependent on chemical relief to a dangerous extent. So, perhaps not the first choice to take on a missing persons case. But the beauty is, Thorkild is absolutely who you want. Unafraid of death, Thorkild will put himself in harm’s way, but, more importantly, he will not cease in his quest.

Asked by an author to look into the case of two missing girls, supposedly for research purposes, all manner of alarm bells are ringing but with nothing else to hang his fragile day to day existence on, Thorkild is all in. From beginning to end, the quality of the writing is all encompassing. Although the author has created some strong supporting characters, Thorkild is such a draw, you don’t want to come across a page or even a paragraph in which he doesn’t feature.

The story itself takes you down some dark paths and Thorkild’s fragile state plays so well in keeping you invested in his progress or otherwise.

Sometimes you come across someone that has you in their thrall. Thorkild is a wonderful creation and this series goes from strength to strength.

Sueoc
5.0 out of 5 stars What a follow up !
Reviewed in the United Kingdom on 31 December 2020
Verified Purchase
Can't wait until the next Thorkild Asks novel, couldn't put it down.Lots of twists and turns along the way.What a book
Read more
Report abuse

TapTheLine
4.0 out of 5 stars A gripping Norwegian thriller featuring a haunted protagonist.
Reviewed in the United States on 10 December 2020
Verified Purchase
In Heine Bakkeid's first volume in the new Thorkild Aske series, I Will Miss You Tomorrow, the readers were introduced to the truly tormented, damned protagonist of the same name who embarked on a missing persons case off the Norwegian coast that ultimately threatened his own life. Thorkild bears many physical as well as psychological and mental scars from his tragic past that includes the loss of the love of his life in a car accident, his three-year stint in Stavanger's correctional facilities, his addiction to prescription drugs such as Oxycontin and benzodiazepines, and a severe brain trauma that led to a distorted perception of reality. He is disgracefully discharged from the police force where he worked as a chief interrogator in the Internal Affairs Unit and he is constantly out of a job. In a way, Thorkild reminded me of another heavily tortured protagonist of Norwegian crime fiction, Jo Nesbø's notorious Harry Hole, the most popular criminal Inspector in Scandinavian crime fiction. Except for a compelling fictional character, Scatter Her Ashes features a complex plot, full of subplots, surprises, and twists as well as a strong whodunit element. The story revolves around another misper case that gets more and more complicated as the plot evolves and ends up in a full-blown serial-killer hunt.

The beginning of the novel finds Thorkild Aske in Stavanger, struggling to survive and find meaning in his empty life after the harsh withdrawal from opiates and benzos. Thorkild has struck a deal with his psychiatrist Ulf, which involves him staying off the dangerous drugs that kept him chained in an existential vacuum for a long time and, in return, Ulf will refrain from smoking. Days are passing slowly for our protagonist until Ulf informs him of a job opportunity as Milla Lind, a very popular crime fiction author wants to employ him as her research assistant for her new book which also is going to be the last in her legendary August Mugabe novel series. Thorkild is called to fill the shoes of his predecessor, another ex-cop who helped Milla with her investigation, Robert Riverholt. Riverholt was killed in the midst of their inquiries for two missing teenage girls who have disappeared from the face of the earth, Siv and Olivia.

It is now Thorkild's turn to continue working on the case which proves to be much harder than he initially believed. Soon, more bodies are discovered scattered around the country, and Milla seems not to be as trustworthy as desired. Furthermore, Milla is surrounded by a group of treacherous men who are supposed to help her with the investigation, but some of them may have a hidden agenda. Thorkild will have to use his experience in interviewing techniques from his previous job in order to reveal the truth about the girls' disappearance while at the same time trying to keep his personal demons at bay as the case escalates to something unimaginable. He will put his own life at risk and he will be threatened by a sinister perpetrator who seems to be close to him and Milla. The research on the case will lead the two main characters to several faraway places in Norway and even further, in St. Petersburg in Russia.

There is a lot of background information provided by the author in the first part of the novel about the character of Thorkild which means that the reader doesn't need to have read the first book in the series to understand his mental and emotional state. The reader gets engaged with the story from the first pages and the pacing is fast, keeping us on the edge of our seats throughout the book's nearly 450 pages. The descriptive parts of the wild northern landscape are captivating and furnish the story with an applicable setting in a manner similar to the greatest works of the Nordic noir genre. You cannot resist the temptation of guessing the villain from start to finish and it's not easy to pinpoint the right individual. Plus, there are some occasional splashes of humor contributing to the decongestion of the gloomy, suppressing atmosphere. I have to admit that I got hooked on this fresh Norwegian crime fiction saga and I heard that the third installment has already been published in Norwegian, awaiting its translation into English. I hope that we won't have to wait for a long time until that happens.
Read more
Report abuse
See all reviews
Back to top
Get to Know Us
Make Money with Us
Let Us Help You
And don't forget:
© 1996-2021, Amazon.com, Inc. or its affiliates