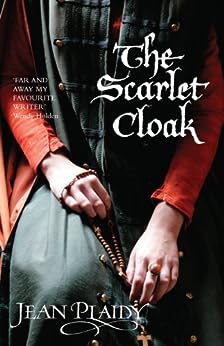 A vivid novel of Spain, England and France during the tumultuous years of the Inquisition --This text refers to the paperback edition.

Jean Plaidy, one of the preeminent authors of historical fiction for most of the twentieth century, is the pen name of the prolific English author Eleanor Hibbert, also know as Victoria Holt. Jean Plaidy's novels had sold more than 14 million copies worldwide by the time of her death in 1993. --This text refers to the paperback edition.

Amazon Customer
3.0 out of 5 stars Three Stars
Reviewed in the United Kingdom on 12 July 2018
Verified Purchase
Not up to Jean Plaidy standard
Read more
Report abuse

bookworm
4.0 out of 5 stars The Scarlet Cloak
Reviewed in the United Kingdom on 26 March 2013
Verified Purchase
A good fast moving story with plenty of lively characters and a load of history. I read Jean Plaidy books when I was younger which I always enjoyed, and I wasn't disappointed with this one.
Read more
One person found this helpful
Report abuse

spooks36
5.0 out of 5 stars readings.
Reviewed in the United Kingdom on 9 October 2009
Verified Purchase
another book well worth reading if you like historical fiction of novels based on fact,
Read more
2 people found this helpful
Report abuse

Amazon Customer
5.0 out of 5 stars Jean Plaidy fan.
Reviewed in the United States on 3 November 2016
Verified Purchase
Jean Plaidy can always be relied upon to produce a cracking good story, and also historically correct. The Scarlet Cloak is no exception. A thoroughly good read.
Read more
Report abuse
See all reviews
Back to top
Get to Know Us
Make Money with Us
Let Us Help You
And don't forget:
© 1996-2021, Amazon.com, Inc. or its affiliates