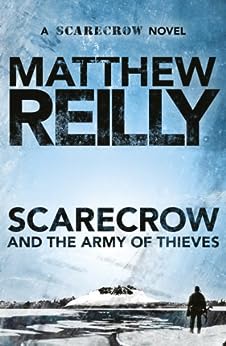 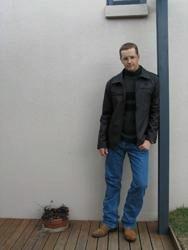 Scarecrow and the Army of Thieves: A Scarecrow Novel 4 Kindle Edition

"Matthew Reilly novels should come with health warnings on the cover. . . . [T]he non-stop life-threatening action . . . is not for the faint-hearted. It's a wild ride."

"Some of the wildest and most sustained battles in an action thriller in a long time. . . . Nonstop action, lots of explosions--and a little bit of conspiracy."

"Matthew Reilly is the king of hard-core action."

"For fans of action, [Matthew Reilly] is essential reading."

--"Library Journal" --This text refers to an alternate kindle_edition edition.

Matthew's books are published in over twenty languages and have sold nearly seven-and-a-half million copies worldwide. In addition, Walt Disney Pictures have optioned the movie rights to his children's book, Hover Car Racer, and the Jack West Jr series was recently optioned by Fox.

Matthew lives in West Hollywood, California. To find out more visit www.matthewreilly.com or follow him on Twitter @matthew_reilly

The action-packed new thriller from SUNDAY TIMES bestseller Matthew Reilly. This time the world's on fire! --This text refers to an alternate kindle_edition edition.

At an abandoned military base in the Arctic, a battle to save the world has begun . . .

THE SECRET BASEKnown only as Dragon Island, this long-forgotten relic of the Cold War houses a weapon of terrible destructive force. And it has just been re-activated.

A RENEGADE ARMYWhen Dragon Island is seized by terrorists, the fate of the world hangs in the balance.

ONE SMALL TEAMThe only unit close enough to avert disaster is an equipment-testing team led by a Marine captain named Schofield, call-sign SCARECROW. They are not equipped to attack a fortified island held by a small army but will go in anyway - because someone has to.

4.6 out of 5 stars
4.6 out of 5
752 global ratings
How are ratings calculated?
To calculate the overall star rating and percentage breakdown by star, we don’t use a simple average. Instead, our system considers things like how recent a review is and if the reviewer bought the item on Amazon. It also analyses reviews to verify trustworthiness.

Jean Seifert
4.0 out of 5 stars Fast Pace
Reviewed in Australia on 20 May 2018
Verified Purchase
One thing for sure Mathew never fails to keep the adrenaline pumping when you read his stories. The documentation leading up to a crisis and in fact all the way through leaves you in no doubt as to what is going on in this very complex story. It is scary in the fact that this could really happen in our time! An opportunistic, crazy group of combatants taunt the world with their even crazier and violent leader who is a pathological and psychotic torturer who takes pleasure in eroding all animal resolve. The call to arms by the Pentagon and plan are manic with lots of deviations. Some surprises are in store for the reader! However I did find one small section of the story involving a locomotive lacking in the way a purging resulted.
I recommend this book as a great read for action and horror.
Read more
Helpful
Report abuse

Ray O.
5.0 out of 5 stars Yet another exciting sequel
Reviewed in Australia on 24 March 2019
Verified Purchase
After the tragic events of Scarecrow, Shane Schofield is finally back in action. Unfortunately, his team is very shrunken down compared to previous novels. This does not distract from the fast paced action. And the French make yet another appearance...
Read more
Helpful
Report abuse

michael
5.0 out of 5 stars very good book.
Reviewed in Australia on 22 November 2018
Verified Purchase
I really enjoyed all the Scarecrow books in the series.This one did not let me down.
Read more
Helpful
Report abuse

Paul Bonwick
5.0 out of 5 stars This series grips my imagination.
Reviewed in Australia on 17 February 2019
Verified Purchase
I’m really a sci fi reader but this series blew me away. So much so, that I’m now a Matthew Reilly fan as well.
Read more
Helpful
Report abuse

kahza duin
5.0 out of 5 stars Another best
Reviewed in Australia on 21 August 2019
Verified Purchase
As often as I find a new series I get bored. This however is not boring in the least. I loved this series. A pity it has ended. If or when a new Scarecrow book comes out I'll be buying it.
Read more
Helpful
Report abuse

Amazon Customer
4.0 out of 5 stars Scarecrow for the win...again.
Reviewed in Australia on 19 April 2021
Verified Purchase
Took a little to get into this one but that was soon fixed! Another great Scarecrow adventure to enjoy! Get on it!
Read more
Helpful
Report abuse

Kindle Customer Frank Atherton
5.0 out of 5 stars Matthew Reilly is awesome
Reviewed in Australia on 31 January 2020
Verified Purchase
I guess it's because I have become a major fan of The Scarecrow and Jack West Junior.
I'm hooked big time.
Read more
Helpful
Report abuse

MrsDunks
5.0 out of 5 stars Best so far!
Reviewed in Australia on 26 November 2016
Verified Purchase
This series gets better and better with each book. What a ride! Can't wait for the next one, just brilliant.
Read more
Helpful
Report abuse
See all reviews

Manda
5.0 out of 5 stars Reilly on the ball again
Reviewed in the United Kingdom on 29 January 2013
Verified Purchase
I was introduced to Matthew Reilly books quite by accident,when persuaded to read the original series,which despite having glanced at,never thought the descriptions on the back covers seemed that exciting...how wrong I was!

One of my top three writers now,along with Chris Kuzneski and Andy McDermott, absolutely brilliant adventure books,well researched and keep you so engrossed you lose all track of time.

This book is a continuation of the scarecrow character ( on of two distinct characters in two book series he does) and to be fair,even you haven't read the others in the series you really need to read them first as it helps follow the stories better,although it is not essential......but I bet you buy the others later!!,

Scarecrow is the main character,called that because of scars over his eyes when a pow,is in the marine corps and it is based around almost suicidal operations he gets involved in,where his seems to be only team (of misfits) available. Sounds a bit cliche but all the books well researched and brilliantly written

Word of warning,if you have bought the " Army of Thieves" in this series don't buy this....it is same book but this is the American title.

Matthew Reilly is an Australian writer,which you can tell as the heros are far more realistic,usually with injuries and issues,not all 6'4" hunks(well not the men anyway) like the majority of American authors heros.

Shopaholic
5.0 out of 5 stars Loved it!!!
Reviewed in the United Kingdom on 15 December 2012
Verified Purchase
I absolutely loved this book. Matthew Reilly is my favourite action writer. He has the ability to grab you by the throat and not let go until the book is finished.
I have to say I'm really glad Scarecrow is back, I've missed him. The title is a bit naff but that does not reflect on the contents at all. The Army of Theives picks up from where the last one left off. Scarecrow has been sent to the Arctic to test prototype equipment almost as a punishment for his escapades. The French are out for his blood and it makes sense to have him as far away as possible. It also means he is there with a mixture of Army guys and civilians.
This sets things up very well for what is to come, though I will not give any spoilers about the story. Permit me to say, though, how happy I was to see the return of Mother and the additions of Baba and Bertie were inspired. I'll be interested to see what happens with Champion as well.
Please remember, Matthew Reilly writes FICTION. You must temporarily suspend belief when reading one of his books. They are not intended to be educational aids. They are FUN!!! And boy, is this book fun.
I must caution you, though, there are some torture scenes that are extremely graphic and even I found myself skimming those pages. However, they are not purely gratuitous so don't be put off.
I hope this is not the last we see of Scarecrow, Mother, Baba and Bertie. It was a rollercoaster read that I didn't put down until it was finished.
Read more
3 people found this helpful
Report abuse

Amazon Customer
5.0 out of 5 stars Scarecrow is back - better read as a book - not on Kindle
Reviewed in the United Kingdom on 20 April 2021
Verified Purchase
Loved the story but wish I had bought the book rather than having it on Kindle. Matthew Reilly likes to put diagrams in his books for the layout of areas etc but they are impossible to see on the Kindle and sometimes they just really need to be seen to understand some of the story.
Read more
Report abuse

Cave Canem
5.0 out of 5 stars Typical Reilly fare
Reviewed in the United Kingdom on 15 May 2013
Verified Purchase
OK, I've read all his books, and I thought the Jack West Jr books sort of lost their way. However, this one is back on form.

It's typically over the top, but only Reilly can get away with that. Needless to say, I enjoyed it and finished in a day.

I'll accept that his stories will be loved by some and hated by others, as a 500 page battle scene where belief has to be suspended is not everyone's cup of tea, but I did like this one. Nice twist too, or a couple of them towards the end.

As for the story, it's the usual Reilly fluff of Scarecrow taking on impossible odds, as well as killer polar bears. Of course he only runs out of bullets when it suits, but so what. Role on the next book, I'm in if the author can keep up to this level.
Read more
6 people found this helpful
Report abuse
See all reviews
Back to top
Get to Know Us
Make Money with Us
Let Us Help You
And don't forget:
© 1996-2021, Amazon.com, Inc. or its affiliates