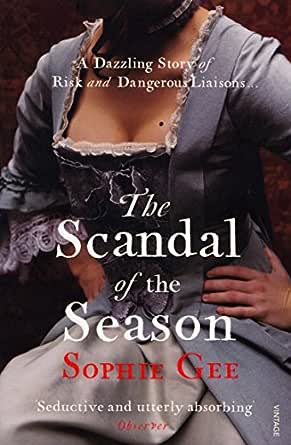 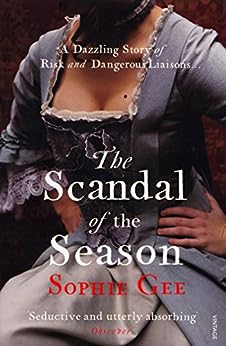 The Scandal of the Season Kindle Edition

"With passion and flair, "The Scandal of the Season" animates an intriguing period of literary history, fleshed out in fluid, intricate, and seductive writing. Every reader will enjoy the wit and subtlety in the novel's dangerous, delicate balance of eighteenth-century customs and transgressions. What a first impression! Sophie Gee's debut novel signals her unique expertise and a great career ahead."-- Matthew Pearl, author of "The Dante Club" and "The Poe Shadow" --This text refers to an out of print or unavailable edition of this title.

Sophie Gee has recreated the real-life scandal that inspired Pope's The Rape Of The Lock to clever, sexy effect, spinning a tale that will appeal to fans of Tracy Chevalier * Daily Mail * Convincing, seductive and utterly absorbing, Sophie Gee's debut will transport its readers * Observer * A clever and inviting piece of critical biography masquerading as a light comedy of manners * New York Times * Gee knows her period inside out, and recreates it with a kind of loving joy...shows us a society in action rather than merely describing it * Guardian * Secret ambition, hidden hurts, put-downs lobbed by the socially insecure; all of these appear... For anyone who enjoyed Shakespeare in Love or Dangerous Liaisons, The Scandal of the Season is a treat; rich and satisfying * Economist * --This text refers to an alternate kindle_edition edition.

Born in Sydney in 1974, Sophie Gee was brought up and educated in the inner-city suburb of Paddington, graduating from the University of Sydney in 1995 with a first-class honours degree in English. She won a scholarship to Harvard, where she wrote a doctoral thesis about pollution, filth and satire in eighteenth-century London. She received a PhD in 2002 and was immediately appointed as an Assistant Professor in the Department of English at Princeton. Recently she held a research fellowship at UCLA and has recently taught at University College London before returning to Princeton. --This text refers to an out of print or unavailable edition of this title.

A seductive novel about risk and dangerous liaisons in a time of Jacobite plots and Popish fears, when marriage was a market, and sex was a temptation fraught with danger, The Scandal of the Season is a brilliant, witty modern love-story - set in 1711. --This text refers to an out of print or unavailable edition of this title.

London, 1711. As the rich, young offspring of the city's most fashionable families fill their days with masquerade balls and clandestine courtships, Arabella Fermor and Robert, Lord Petre, lead the pursuit of pleasure. Drawn together by an overpowering attraction, the two begin an illicit affair. Alexander Pope, sickly and nearly penniless, is peripheral by birth, yet his uncommon wit and ambition gain him unlikely entrance into high society. He longs for the success that will cement his place there; all he needs is one poem grand enough to make his reputation. As the forbidden passion between Arabella and Lord Petre deepens, an intrigue of a darker nature threatens to overtake them. Fortunes change and reputations even lives are imperiled . In the aftermath, Pope discovers the idea for a daring poem that will catapult him into fame and fortune. "The Scandal of the Season" captures the hedonism, romance, and risk of a time when marriage was a market, the wrong beliefs equaled treason and dishonor, and sex was a temptation fraught with danger. " --This text refers to an alternate kindle_edition edition.
Read more

A Customer
5.0 out of 5 stars Five stars
Reviewed in Australia on 8 June 2020
Loved the book, great characters atmosphere I felt like I was in the 18th century.
Read more
Helpful
Comment Report abuse
See all reviews

K. J. Gray
2.0 out of 5 stars Sans Scandal
Reviewed in the United Kingdom on 3 January 2008
Verified Purchase
I had great hopes for this book, as I love historical fiction and the 18th century in particular. I found the plot to be too shallow and too slow to read without skimming for pages until something finally happened. The characters are all self-centred and very flat, and some of their lines are just shockingly bad ("I wish to spend inside of thee.") The book has elements of interest, but I feel it didn't all come together to make a great read.
Read more
4 people found this helpful
Report abuse

Hamilton Beck
3.0 out of 5 stars Disappointing
Reviewed in the United States on 22 June 2018
Verified Purchase
For readers interested in 18th-century London, a novel that features Alexander Pope, Jonathan Swift and Richard Steele should be a real treat. I started reading "The Scandal of the Season" expecting to enjoy it, especially given all the favorable attention it has received (three pages of blurbs in the paperback edition!), but came away disappointed. First, Swift, Steele and even Pope are hardly the main characters. Rather, these are the decidedly less interesting – at least to me – Arabella Fermor and Robert, Lord Petre.

A second problem, no less important in my view, has to do with style. While the dialogues ring true, the descriptions for the most part seem more modern, sometimes trying to sound 18th century, oftentimes not. In short, the conversation sparkles, while the narration explains. Personally, I find this mixture of two distinct styles jarring and disconcerting.

Speaking of explanation, Gee has a rather didactic habit of telling us what a character is really thinking (it comes as no surprise that the Scribner edition comes with about three pages of questions for discussion at the end). It would have been better if she had left it up to the reader to figure out the tone in which some things are said, much less the precise reason why the character says them. The result is that she informs us of matters we are quite capable of deducing ourselves. Exasperating. Was it, in 2007 – when this novel first came out – already too much to expect that the audience could figure out for itself a character’s emotions? Evidently so.

I finally lay the book aside when Gee saw fit to liven things up by the insertion of a sex-scene of the bodice-ripping genre: “ ‘You see; I am wet and ready for you.’ “ (pg. 105) This brief encounter – which mercifully does not include Alexander Pope – occurs with virtually no preparation, though I suppose I should have been forewarned by the cover illustration, which shows a partial rear view of a woman wearing a laced-up corset made of red satin. “Cheesy” is the word used by another reviewer (“The Boleyn Girl”, Oct. 11, 2009).

It seems the author was afraid that a novel mostly consisting of witty dialogue (and a political-religious murder in the opening pages) would not suffice to hold the interest of a 21st century audience, and needed to be juiced up.

"It's true that a writer can make marionettes out of eighteenth-century men and women, adroitly or clumsily, bringing the readers in on the trick and providing entertainment. But this has nothing to do with 'writing history.'" (Arlette Farge: The Allure of the Archives, 76) Nor, I would add, does this provide the formula for a successful novel.

Hockey Skate Laces
3.0 out of 5 stars Interesting Story, Weak Characters, But Worth the Read
Reviewed in the United States on 20 July 2010
Verified Purchase
I enjoyed "The Scandal of the Season" but it could have been better. The storyline was interesting, kept me turning the page but I think the characters were flat. The only one I even felt remotely invested in was Alexander Pope, probably because I was already familar with him. The author missed the opportunity to recreate 1711 London and the rest of the characters in a way that would appeal to a larger audience. Especially given that a lot of the characters actually existed and the story is based on a true story.

Sophie Gee clearly knows her subject, but assumes that everyone who picks up this book is as passionate about Pope as she is. "The Rape of the Lock" was required reading during my Sophmore year of high school, it would have been fun to have this book then.

B. A. Chaney
3.0 out of 5 stars A fun read, but a little dissapointing in the end
Reviewed in the United States on 10 January 2008
Verified Purchase
I received this book as a Christmas gift, and I was anxious to read it because I usually really enjoy historical fiction. Unfortunately I felt like this book was more romance than history. I mostly enjoyed the romance, and at times the book really was a page turner. But in the end the novel felt a little flat. The characters were quite flat, and there was little of the historical element that I had been expecting. The author writes well, so I hope if there is another novel it has more of a historical slant.
Read more
6 people found this helpful
Report abuse
See all reviews
Get FREE delivery with Amazon Prime
Prime members enjoy FREE Delivery and exclusive access to movies, TV shows, music, Kindle e-books, Twitch Prime, and more.
> Get Started
Back to top
Get to Know Us
Make Money with Us
Let Us Help You
And don't forget:
© 1996-2020, Amazon.com, Inc. or its affiliates