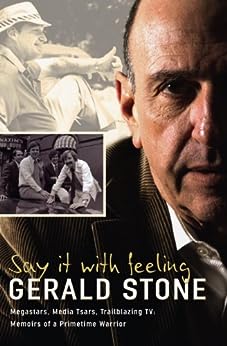 Say it with Feeling Kindle Edition

by Gerald Stone (Author) Format: Kindle Edition
See all formats and editions
Sorry, there was a problem loading this page. Try again.

Since his arrival in Australia from the United States in the early 1960s, Gerald Stone has been at the forefront of Australian news media from working on such legendary programs as This Day Tonight to founding executive producer of 60 Minutes.

His career has spanned the glory days of free-to-air television and made him an intimate of the most famous names in the industry - whether proprietors such as Kerry Packer and Rupert Murdoch, or stars such as Jana Wendt, Ray Martin, George Negus and Richard Carleton.

In this fascinating memoir, Gerald's journey through the world of Australian television is full of characters, genuine insights and illuminating stories. Gerald's own tale offers a panoramic yet intensely personal view of these never-before-heard stories behind some of TV's most treasured moments.

BSG
4.0 out of 5 stars Enjoyable
Reviewed in the United States on 23 February 2012
Verified Purchase
Part autobiography/part social history of the US and Australia, this is a very good book.

Covering some of the most important events in the Australian media from the 60's to the 90's, Stone looks at his time in Vietnam, This Day Tonight, 60 Minutes and finally at the Bulletin magazine.

A spell at Fox in the United States is also covered in reasonable detail, providing a good contrast between the values and expectations of Australians and Americans.

Stone also gives his thoughts on the differences between Channel Nine and Channel Seven, and the differing styles of Kerry Packer and Alan Bond.

Definately worth your time to read this one.
Read more
Report abuse