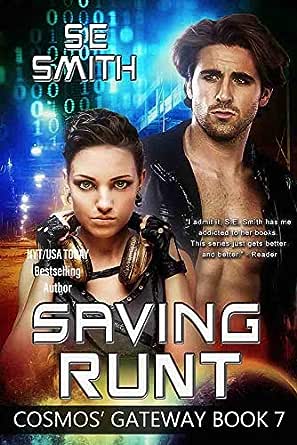 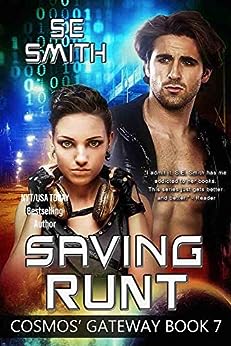 SE Smith is one of my favorite authors. Every series has you on the edge of your seat anxiously awaiting her next book.--Reader

Amelia ‘Runt’ Thomas’ life revolves around a dangerous game of cat and mouse with the most ruthless criminals in the world. She follows two codes: the code of hackers and her personal code of honor to bring down anyone who thinks they’re untouchable. She is on target until one fateful night when the touch of a strange man sends an unexpected shock wave through her. Now, the faint whispers in her head are growing louder and more annoying, distracting her from her mission.

Derik ‘Tag Krell Manok’s search for the mysterious woman who changed his life nearly two years before is finally over. As a Prime warrior from another world, he knew the moment he touched Amelia that she was his bond-mate—but she disappeared before he could whisk her away to safety. He is determined not to let that happen again, but he also knows that he needs to proceed with caution because Amelia is unlike any woman he has ever known before.

As their connection grows, so does Derik’s fear that he will be unable to keep Amelia safe from a man who is just as determined to find her and use her amazing talents for his own devious purposes. Find out what happens when an alien warrior, a determined AI named RITA, and a few other surprising twists come together to save a special woman named Runt!

Internationally acclaimed S.E. Smith has done it again! A fantasy sci-fi crime thriller with a strong romantic core and your favorite characters from the Cosmos’ Gateway Series. Can stand-alone!
See all Product description

Tessa
TOP 50 REVIEWER
4.0 out of 5 stars The hacker and the mobster
5 August 2019
Format: Kindle EditionVerified Purchase
Amelia (Runt) Thomas is a genius hacker. She spends her time targeting big criminals and relieving them of their money. She doesn’t keep it for herself but gives it away to charity. She was an orphan from the age of fourteen. She loved her mother but blamed her father for her mother’s death and wasn’t unhappy when he was also killed. But she is looking for revenge on the part of her mother.
Derick ‘Tag Krell Manock is an alien from the planet Baade. There is a shortage of women on Baade so, when it is discovered that human women are compatible with his species, he (and every other Prime warrior) wants to go to Earth to try to find his mate.
A coincidence puts Runt in his way and as he touches her the mating mark appears on his palm, and hers! But Runt escapes him and it is another two years before they meet again. It was probably a good thing since Runt was only sixteen when he first glimpsed her but now she is eighteen to his twenty.
Runt is now with Cosmo’s company and looks on RITA (an AI with attitude!) as a surrogate mother.
Runt becomes frustrated with her situation. She is used to living free, coming and going as she wishes. So, one evening she gives everyone the slip but in the process gets killed snapped by a very bad man! That’s it for Derick! No matter what anyone says he’s going to Earth to rescue her.
This is a cute story that takes place in the Cosmo’s Gateway series. Maybe not quite as edge of the seat as some of the other books but Susan is incapable of writing a bad book. So pick it up and sit back and enjoy yourself!

jamoz23
TOP 50 REVIEWER
3.0 out of 5 stars Disappointing as I just didn’t end up liking Amelia.
18 September 2019
Format: Kindle EditionVerified Purchase
I always one click this author but for the first time ever I put down a book by Ms Smith and didn’t come back to it for a while.
As much as I was enjoying how well this was playing out and the family ties/dynamics that were emerging, Amelia was just not endearing herself to me.
At times I found her attitude selfish. It was all about what she wanted, not what was for the best. Just like her mother apparently.
Saying that, I really wondered why her mother was introduced after her
great disappearing act. Even if her reasoning was valid, which it wasn’t, why didn’t she reconnect with Amelia once the husband/father was dead. She left Amelia for all intents and purpose, homeless on the streets. What mother who professes to love her child would do that? And what was with her working for her own brother as a servant?
I was so disheartened by Amelia interfering between her mother and Rav. Just because she was not interested in mating Derik, doesn’t give her the right to interfere like that.
Loved Derik and getting a bit of time with the others. He was the saviour of the story for me.
Really do not like the fact the Juangans have come back.
So though I finished this book, I cannot say I loved it or will be rereading it.
Just gone a bit silly with the AI’s too. I found it very unbelievable that we now have young AI’s.
May not read the next book as it is about the selfish mother.

Kindle Customer
TOP 1000 REVIEWER
5.0 out of 5 stars Great series
2 August 2019
Format: Kindle EditionVerified Purchase
Scifi on steroids.
Runt is a computer genius,
stealing millions from the bad guys that killed her mum.
Derik is an Alien who is Runt bond mate.
All the plans are well organized, the characters, especially Runt ,are fantastic.
Great books.💗 can't wait for the next.
Read more
Helpful
Comment Report abuse

Dreamlover63
5.0 out of 5 stars Read it you will love it
24 August 2019
Format: Kindle EditionVerified Purchase
Loved the book, have enjoyed reading all of S.E. Smith’s books because they take you along for the adventure. You fall in love with the characters and want them to succeed in what ever they are doing. Most all I love the twists and turns she does it keeps the story running smoothly (lol)
Read more
Helpful
Comment Report abuse

Stacey G
TOP 500 REVIEWER
4.0 out of 5 stars Love this series
6 January 2020
Format: Kindle EditionVerified Purchase
I love the Cosmo's gateway series. This book was good but I didn't think it was as good at the others. I do however recommend reading it. It is a fantastic series.
Read more
Helpful
Comment Report abuse

Go to Amazon.com to see all 87 reviews 4.6 out of 5 stars
Get FREE delivery with Amazon Prime
Prime members enjoy FREE Delivery and exclusive access to movies, TV shows, music, Kindle e-books, Twitch Prime, and more.
> Get Started
Back to top
Get to Know Us
Make Money with Us
Let Us Help You
And don't forget:
© 1996-2020, Amazon.com, Inc. or its affiliates