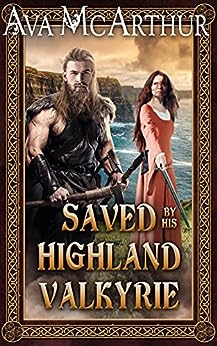 by Ava McArthur (Author) Format: Kindle Edition
See all formats and editions
Sorry, there was a problem loading this page. Try again.

She saved the Viking. Now she must make him stay.

When Fionnuala sees that a terrible storm brought a Viking to her shores, she is terrified. Not knowing if it’s out of bravery or recklessness, she approaches him and discovers that the man is on the brink of death. She is afraid to bring the giant home, but she can not leave a soul to perish on this beach.

Gathering all the courage she has, she brings him to her bed and spends a sleepless night with a knife in her hands. When the Viking wakes up, Fionnuala is relieved to see that, despite his terrifying looks, his intentions are not hostile. Erik, as his name is, will stay there for a few days to heal, so Fionnuala conducts a plan; if she can get him on her side, maybe he can save them from the next Viking raid.

However, Erik's purpose is to return home and meet again with his brother and his people. But time and the care of a woman can soften the hardest heart, and when Vikings do arrive, Erik will take decisions he never thought he would. The danger passes for a while, but they will need an army if they truly want to be safe, and thus, Fionnuala decides to ask for the help of her cousin.

Erik will join Fionnuala in this journey, at the end of which, he will find the greatest surprise of his life; his brother is alive, but he is not in Norway! With this unexpected turn of events, Erik can be a Laird again with the help of his brother... Fionnuala is shocked to know that the man she has been nursing used to be an Earl, and she feels naive about the feelings she had developed for the Viking.

Yet, since she and her people fought back once, they are in even greater danger now, and they need Erik and his men more than ever. The only question is, how can she convince the Earl to stay and help her?

Ava McArthur’s “Saved by His Highland Valkyrie”, will take you on an epic journey to the time when Vikings raided the Scottish Highlands! Feel the surprise, agony, joy, and enthusiasm along with the heroes. Get your copy for FREE With Kindle Unlimited! Enjoy!

4.6 out of 5 stars
4.6 out of 5
42 global ratings
How are ratings calculated?
To calculate the overall star rating and percentage breakdown by star, we don’t use a simple average. Instead, our system considers things like how recent a review is and if the reviewer bought the item on Amazon. It also analyses reviews to verify trustworthiness.

Brigid
4.0 out of 5 stars Review
Reviewed in Australia on 23 May 2021
Verified Purchase
Enjoyed this story, but not as much as the 1st one... or is it bcos the frustration I have accessing the extended epilogues on all your books, brings my mood down from a 5 to a 4. I never have problems with any other author accessing their extended epilogues
Read more
Helpful
Report abuse
See all reviews

Deborah stone
5.0 out of 5 stars Great book
Reviewed in the United Kingdom on 23 May 2021
Verified Purchase
Loved it
Read more
Report abuse

Amazon Customer
5.0 out of 5 stars Hood plot
Reviewed in the United Kingdom on 9 June 2021
Verified Purchase
Loved the plot and couldnt put it down
Read more
Report abuse

Orthopédagogue
5.0 out of 5 stars A delightful sequel that ties everything together
Reviewed in Canada on 25 May 2021
Verified Purchase
Erik and Fionnuala both have lived painful hardships. I liked how their relationship evolved, how they learned to trust and rely on each other. Fionnuala, despite being a widow, shows a lot of strength and determination, while Erik questions everything he knows about his way of life and what he wants it to be. A lovely story, with just enough heat and unpredictable moments!
Read more
Report abuse

Laura
5.0 out of 5 stars Brotherly Reunion
Reviewed in the United States on 23 May 2021
Verified Purchase
It was very exciting to read the sequel about Erick and how he survived the storm that destroyed his boat. Great tie in to the brothers reunion. Like Ragnor he had met a great women and a different way of life. Being a Viking did not mean destroying innocent people who already didn't have anything. Like Ragnor Erick wanted to defend a woman and help her clan. Norway forgotten and new lives built in the highlands. Another spectacular story of joining forces even with differences.
Read more
One person found this helpful
Report abuse

William M. Thompson
4.0 out of 5 stars Vikings and Highlanders
Reviewed in the United States on 2 June 2021
Verified Purchase
The story of Fionnuala and Erik follows the storm which led Erik's brother to the Highland shores. Fionnuala falls hard fast while Erik has a slow burn which creates a lot of distress for Fionbuala. Finally Erik sees the light.
Read more
One person found this helpful
Report abuse
See all reviews
Back to top
Get to Know Us
Make Money with Us
Let Us Help You
And don't forget:
© 1996-2022, Amazon.com, Inc. or its affiliates