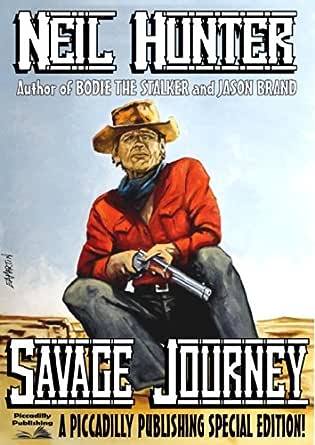 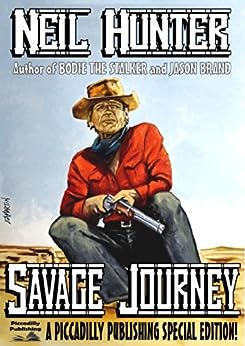 When Luke Kennick answered the urgent summons that drew him back to the Army fort, it brought him face to face with ghosts from his past he wanted to stay long buried. Despite his concerns, he agreed to escort the captive Comanche warrior Kicking Bear across the country to face his trial.
It meant a lonely, dangerous trek across an increasingly hostile land, with vengeful men who wanted to kill him and the unexpected burden of a beautiful young woman he found abandoned along the way.
Luke Kennick was forced to face the shadows of his past and the dangers of the present, and he had no way to go except the violent trail that made his Savage Journey, knowing that there would have to be a showdown at the end.


Neil Hunter is a pseudonym of the prolific Lancashire-born writer Michael R. Linaker. As Neil Hunter, Mike wrote two classic western series, BODIE THE STALKER and JASON BRAND. Under the name Richard Wyler he produced four stand-alone westerns, INCIDENT AT BUTLER’S STATION, THE SAVAGE JOURNEY, BRIGHAM’S WAY and TRAVIS. Another western, HIGH KILL, was later published in the SUNDANCE series as BOUNTY KILLER. His western output can also be found under the names ‘Dan Stewart’, ‘John C. Danner’ and ‘Frederick H. Christian’, the latter name employed when he ghost-wrote an additional five titles in Frederick Nolan’s popular FRANK ANGEL series. Mike has written three ‘nasty’ horror novels under his own name, but since the late 1980s has become best-known as one of the most popular contributors to Gold Eagle’s MACK BOLAN series, chronicling the adventures of PHOENIX FORCE, THE EXECUTIONER and STONY MAN, as well as his own action-adventure series, CADE.

John sato
1.0 out of 5 stars terrible book
27 June 2015 - Published on Amazon.com
Verified Purchase
The story was too unbelievable. No man would go through all that trouble unless he was that stupid. Sorry I bought the book.
Read more
One person found this helpful

Doug
2.0 out of 5 stars Two Stars
22 November 2014 - Published on Amazon.com
Verified Purchase
Fair
Read more
One person found this helpful
Go to Amazon.com to see all 2 reviews 1.5 out of 5 stars
Get FREE delivery with Amazon Prime
Prime members enjoy FREE Delivery and exclusive access to movies, TV shows, music, Kindle e-books, Twitch Prime, and more.
> Get Started
Back to top
Get to Know Us
Make Money with Us
Let Us Help You
And don't forget:
© 1996-2020, Amazon.com, Inc. or its affiliates