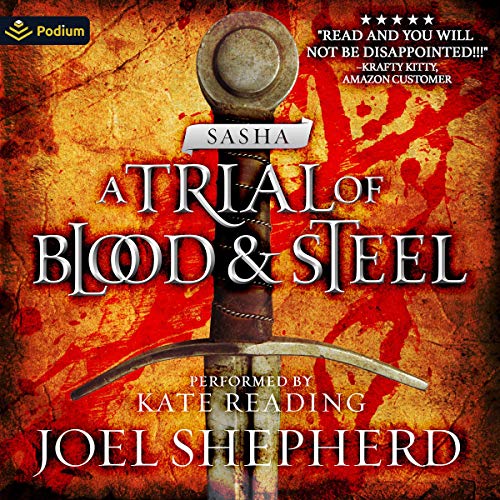 Sasha: A Trial of Blood and Steel, Book 1

4.4 out of 5 stars
4.4 out of 5
107 global ratings
How are ratings calculated?
To calculate the overall star rating and percentage breakdown by star, we don’t use a simple average. Instead, our system considers things like how recent a review is and if the reviewer bought the item on Amazon. It also analyses reviews to verify trustworthiness.

Bob
1.0 out of 5 stars Didn't like it as much as SF works. Refunded
Reviewed in the United Kingdom on 27 January 2021
Verified Purchase
I returned this for a refund only halfway through the first chapter. Which is the good thing about Kindle. Although I, surprisingly, liked his Phoenix military scifi, and also some of Shepherd's other scifi. This fantasy just bored me. I didn't care.
Read more
Report abuse

Robert Mitchell
5.0 out of 5 stars Great first book in this series
Reviewed in the United Kingdom on 23 May 2019
Verified Purchase
Interesting world, blending scottish clan, samurai sword play, medieval warfare and politics and surprisingly it really works all hung together by interesting engaging characters, nobody creates strong leading female characters as well as joel weather its fantasy or sci fi, excellent start to the series
Read more
Report abuse

Jon Doe
4.0 out of 5 stars Trials
Reviewed in the United Kingdom on 15 August 2018
Verified Purchase
Still in Book One, but the characters are intriguing, the world well-realised and the story complicated but interesting. Unfortunately, you actually need the character guide at the very beginning of the book to keep track. However, well-worth reading.
Read more
Report abuse

ReadingGrump
4.0 out of 5 stars Solid fantasy ...
Reviewed in Germany on 26 February 2017
Verified Purchase
... assuming it's action you are looking for.

While I'm not entirely sure what the setting is based on, it reminds me vaguely Frankish times in Europe; perhaps inspired by a (partially) pagan Germany with a Christian nobility; or perhaps it's inspired by similar situations somewhere else in Europe.
Anyway, while it's less important where the inspiration comes from, the religious situation is a key factor in the book: the country is ruled by pseudo-Christians, but the populace is largely pseudo-pagan. Caught in-between is Sasha, the heroine, one of the country's princess - she is from the pseudo-Christian nobility, but lives with the pseudo-pagans, and is taught swordfighting (and more) by ... a pseudo-Confucian.

Her family wants her to stick with the nobles, the pagans want to use her as a symbol, and her teacher wants her to make her own decisions. To complicate the issues, foreigners meddle, and there's talk about a pseudo-crusade against the pseudo-elves. It's a tense situation, and bad stuff happens to nobody's surprise.

What impressed me much more than the plot (or the characters or the settings...) are the action scenes though: there aren't that many, but in my opinion they are very well written. We get to read about Sasha both in personal combat, as well as in larger warfare, and both are equally good. This is action one can actually imagine while reading. Sasha's unreal skill aside, it's also all fairly "realistic" - if that matters. And it's not like Sasha does anything that, as such, is impossible to do. So that's OK with me.

A solid first book of a solid series, mostly recommended for the action.

"Spoiler": just my opinion, but the 2nd novel and the first parts of the 3rd are the weakest parts of the series. Bad enough to almost get me to quit it. But I stuck with it, and the rest of the third book plus the fourth were a great reward for that. Something to keep in mind, perhaps.
Read more
One person found this helpful
Report abuse

larrypilot
3.0 out of 5 stars sasha
Reviewed in Canada on 8 March 2013
Verified Purchase
a fantasy in an imaginary land. lot,s of horses,sword,s,hero,s and one kickass heroine.a good read for the 10 to 16 year old group who like to read. just thinking out loud. l.doyon
Read more
Report abuse
See all reviews
Back to top
Get to Know Us
Make Money with Us
Let Us Help You
And don't forget:
© 1996-2021, Amazon.com, Inc. or its affiliates