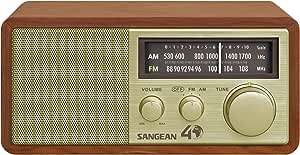 Brand: Sangean
4.7 out of 5 stars 463 ratings
Secure transaction
Returns Policy
Amazon-managed Delivery
Your transaction is secure
We work hard to protect your security and privacy. Our payment security system encrypts your information during transmission. We don’t share your credit card details with third-party sellers, and we don’t sell your information to others. Learn more
Amazon-managed Delivery
Amazon manages delivery by using preferred couriers/agents. Order delivery tracking to your doorstep is available

Deals related to this item

4.7 out of 5 stars
4.7 out of 5
463 global ratings
How are ratings calculated?
To calculate the overall star rating and percentage breakdown by star, we don’t use a simple average. Instead, our system considers things like how recent a review is and if the reviewer bought the item on Amazon. It also analyses reviews to verify trustworthiness.

richard evans
1.0 out of 5 stars radio suited for usa
Reviewed in Australia on 8 October 2020
Verified Purchase
i returned the radio after much consternation. the radio would only work in the usa as the power cords were american

i am still waiting for my credit even though i returned the radio three weeks ago. disastrous.
Read more
Helpful
Report abuse
See all reviews

Amazon Customer
5.0 out of 5 stars Superb
Reviewed in Canada on 22 July 2020
Style: WR-16Verified Purchase
I have a lot of radios, from vintage Sony's and GE superadios to newer such as tecsuns an others
So I needed another radio like I needed a hole in the head but I could not resist the temptation of trying out the sangean wr16.
I wanted to know if all the reviews were right and besides you can never have too many radios, I think every radio has a different character and I keep rotating them on my night table.
The sangean wr16 lived up to all the hype. Sound is superb as is the reception. I like to listen to Vermont NPR here in Montreal and it comes in loud and clear. Very few radios are able to do this so needless to say I'm happy. Aesthetically speaking it's a beautiful radio that will complement any room. I haven't tried the other features like the Bluetooth but I have no reason to believe it's not as good as the rest. To finish, this is a radio that sounds and looks more expensive than its price. I am very happy with my purchase.
Read more
7 people found this helpful
Report abuse

Philo
5.0 out of 5 stars Good value
Reviewed in Canada on 5 December 2019
Style: WR-16Verified Purchase
Nicely built bluetooth kitchen radio, good looking and compact ... it replaces a 10 year old Sony unit that had to be more than double the size.The FM reception is more than adequate with the supplied wire antenna that connects to the 75 ohm outlet on the back.Don't expect your Spotify playlist on bluetooth to sound like it would on a micro sound system , this wasn't designed for that !
For low to medium volume in FM mode it does the job perfectly as the unit has decent bass at low volume.
Curious to see how long this unit will last as it will be on from morning till night for the pets in the house when we leave for work ...
Read more
7 people found this helpful
Report abuse

Tech Guy from IL
4.0 out of 5 stars Very high quality, great sounding and great performing radio with an important caveat - read updated review!
Reviewed in the United States on 27 November 2016
Style: WR-11Verified Purchase
I absolutely love this radio! I've actually bought two of them because I liked them so much. One has a slight issue which I'll explain later. First, the sound quality is fantastic for a tabletop radio. I do not find it too "bassy", but keep in mind that I mainly listen to classical music. I could see where some people might think it sounded too bass heavy on an NPR newscast. If that is the case, you can place a cotton ball (or other sound dampening cloth) in the port on the back. It absolutely will not damage the speaker, so feel free to try this if you want to.

The sensitivity of this radio is great on both AM and FM. Way better than my Tivoli Model One on AM in particular. It does not have 'soft muting' between AM stations. It has full sensitivity. If you are picking up noise and interference on AM, it is due to where you have the radio located. It is not the fault of the radio. AM is very much affected by interference from lighting, computers, motors, and just about everything else. The only solution is to move the radio or connect an external AM antenna (there are terminals for this). Do not blame the radio! I have no problem picking up weak stations. This radio was not designed for "DXing" but it will pick up a lot of distant stations at night. It's a good compromise between selectivity and fidelity. It is not a communications receiver with narrow filters. The FM sensitivity is surprisingly excellent. I use (and recommend) an external FM antenna. Internal or line cord FM antennas are poor at best. They may work for you in your situation; you can try it and see. I have my WR-11 connected to a large rooftop yagi and I use it to listen to a classical station more than 60 miles away. That is a pretty good feat these days considering the way the FCC has allowed the FM band to be degraded with a lot of additional FM stations as part of their so-called "AM Revitalization" program. In reality they are turning the FM band into an interference-ridden mess, just like the AM band. The sensitivity of this radio on FM compares favorably with my much more expensive tuners. The selectivity is also pretty good. The classical station I listen to on 90.5 if flanked by stations on 90.3 and 90.7 and I am in an area with dozens and dozens of strong local stations.

I like the fact that this model has the power supply built in rather than being a wall wart (like the WR-15). The power supply does not draw much power when it is turned off. I measured it with my Kill-a-Watt and it actually draws only 1.1 watts when it is off (not 5 watts like another reviewer said). That is insignificant. When it is playing at moderate volume it draws 3-4 watts. And it has no audible hum (like the Tivoli has).

A couple of notes about the audio. Yes, if you plug a cable into the aux input on the back, it will automatically disconnect the radio given that there is no separate switch for this function. Also if you plug in a pair of stereo headphones, it will play in both ears but the sound will be in mono, not stereo as claimed by another reviewer. Therefore, you can't use this radio as a tuner for your stereo system if you want full stereo sound.

As far as the tuning dial accuracy is concerned, I would judge it to be excellent for an analog slide-rule type of dial. And the tuner stays tuned in quite solidly on one of my two sets. The other one does drift a bit, and this is the issue I mentioned earlier. I don't know why one of them drifts and the other one doesn't although the one that drifts is in my cabin where the temperature is not as well controlled. Temperature changes do affect tuning elements and that could certainly be part of the problem, but I have a feeling that even so, that one is just not quite as stable.

If you get this radio, I think you are sure to love it. The wooden case is also very nice. It's a high quality product.

UPDATE: Watch out, the tuner in the 40th Edition model is different and not as good as the original! Unfortunately, Amazon does not differentiate between the two models in the reviews, and this happens with other products also. They have changed the tuner design and it now incorporates the "soft muting" characteristic on AM. If you want to listen to a weak station, it will be heard at greatly reduced volume. I found that AM reception was generally poor compared to the original model, and also picked up a lot of static. I am not sure whether the static is coming from the internal power supply or just being conducted from the AM line. There is no high end on AM, it is all bass. Subjectively it sounds like they rolled off the frequency response above about 500 Hz!

Unfortunately they also changed the tuner on FM as well and it has also been degraded. When tuning across a station, it comes in at three distinct points, accompanied by a distinct "click" sound as it locks onto each one. The middle one is the strongest one and the two outer ones will be heard at slightly reduced volume. In addition, stations can be heard at even lower volume beyond those points. This seems to be true even for stations that are not very strong. I don't know what they were thinking when they changed the design of the tuner. It is not an improvement.

That said, the sound quality on FM is still excellent, and it is superior to other small table radios that I have tested. If I could give separate ratings for various features of the 40th Edition model I would rate it like this:

I am not sure, but I suspect that Sangean may have changed the tuner design in the current production of the regular model WR-11 radios to the new design. I am not going to buy one to find out, because I already own two older ones which were fine. But if you buy either model of this radio, be advised that it might have the issues discussed above. Because of the poor tuner performance of the current design, I have decided to drop my overall rating from 5 stars to 3 stars.
Read more
643 people found this helpful
Report abuse

Jim Reece
5.0 out of 5 stars Great Kitchen Radio with Bluetooth
Reviewed in Canada on 9 February 2021
Style: WR-16Verified Purchase
This is a great basic feature AM/FM radio with Bluetooth. The sound quality is very good considering the size. It is very easy to sync the bluetooth. It does have built in AM/FM antennas or you can use external antennas.

The radio is well built and quite solid.

You also have a USB charging port for your cell phone or tablet.

The only improvement would be to have a version that has a brushed metal front face but again would you want to spend more money for just feature. The plastic front has grow on me. The wood finish is a nice touch, keep it mine it just a very thin wood veneer, so treat it as such and you should get years of enjoyment from this unit.

I am very pleased with the quality of the product and give it 5 stars. The
Read more
One person found this helpful
Report abuse
See all reviews
Back to top
Get to Know Us
Make Money with Us
Let Us Help You
And don't forget:
© 1996-2021, Amazon.com, Inc. or its affiliates