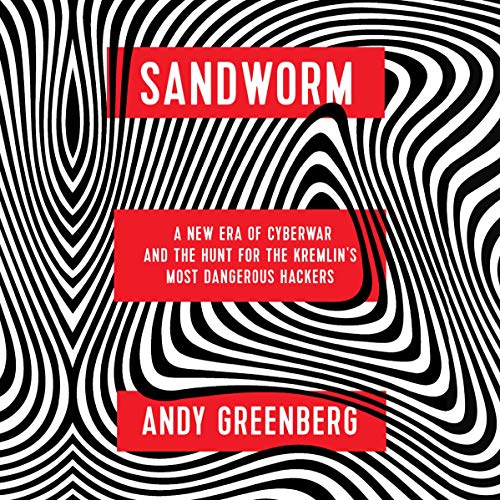 Sandworm: A New Era of Cyberwar and the Hunt for the Kremlin's Most Dangerous Hackers

4.6 out of 5 stars
4.6 out of 5
1,147 global ratings
How are ratings calculated?
To calculate the overall star rating and percentage breakdown by star, we don’t use a simple average. Instead, our system considers things like how recent a review is and if the reviewer bought the item on Amazon. It also analyses reviews to verify trustworthiness.

laranzu
4.0 out of 5 stars 21st C successor to "The Cuckoo's Egg" and "Takedown"
Reviewed in Australia on 3 August 2020
Verified Purchase
I'm not a cyber security professional, but I do work with computers and networks and have some interest in what's going on in the world of hacking and cyberwar and other buzzwords. This book is for a general audience rather than specialists, and concentrates on who the important players are and how they are funded and operate. What are their goals? What kind of people are they?
Just as "The Cuckoo's Egg" gives a concise overview of hacking in the 1980s, and "Takedown" of hacking in the 1990s, this is a good introduction to hacking in the early 21st C. I would however have liked a little more technical detail, which both of the earlier books managed without drowning you in technolgy.
Read more
Helpful
Report abuse

MarkT
5.0 out of 5 stars Great Read and deeper insights to many cyber events you didn’t know were linked
Reviewed in Australia on 17 March 2020
Verified Purchase
This was a compelling read .. thought I knew a lot about many of the narratives included here but had no idea of the details and linkages leading to one threat actor organisation.
The writers painstaking attention to detail while covering a wide range of history, conversations with incredibly dedicated people and suppositions made, makes this investigation a great read from start to finish. But it’s conclusions are very worrying so make the time to read and be aware ...
Read more
One person found this helpful
Helpful
Report abuse

Horatio
5.0 out of 5 stars well written and very misinformation book which is fascinating to read
Reviewed in Australia on 6 January 2021
Verified Purchase
Andy Greenberg is an authoritative source AND a professional journalist so the book is laden with facts,yet the story is told in the genre of a popular publication without the dryness one might expect from a serious subject like this. A captivating read and highly relevant for the times and politics in which we currently find ourselves.
Read more
Helpful
Report abuse

John Timothy Moore
5.0 out of 5 stars A brilliant absorbing read
Reviewed in Australia on 11 October 2020
Verified Purchase
Gave me a more detailed picture of some of the hacking operations described in ‘The Hacker and the State’ - well researched and great that we learn something of the major players involved. Good work! 😊👍👏
Read more
Helpful
Report abuse

Elmar S.
5.0 out of 5 stars Excellent !
Reviewed in Australia on 13 April 2021
Excellent! My first audiobook and I love it. Very detailed description of the background of this entire story and a riveting read/listen. Love it on my long drives & would recommend the title and audio books in general!!!
Read more
Helpful
Report abuse
See all reviews

Dragojevic Aleksandar
2.0 out of 5 stars Biased
Reviewed in the United Kingdom on 6 August 2020
Verified Purchase
An interesting read, but very biased and anti-Russian. I would prefer a more neutral tone - there is cleary a lot that Russia is doing and it shouldn't.

I learned about just how far cyber attacks can go and have gone. The hystorical overview is very questionable though,
which makes me doubt the rest of the book. For instance, "Russians oppressing Ukrainians for hundreds of years" is a very strange interpretation of history. Outrage at the Russian meddliing in US elections is also very odd. This is not something they should do, but the US and Europe have been doing that for decades. Similarly, attacks on civil infrastructure are to be condemned, but that happens in war. The author actually mentions bombing of Serbian power infrastructure in 1999, but then hypocritically states that those power plants supplied the army, when in reality those were supplying power to the civilians as well. These are just some of the examples.

A more objective book on the topic would have been much more enjoyable.
Read more
14 people found this helpful
Report abuse

GB
2.0 out of 5 stars Too political too biased and too speculative
Reviewed in the United Kingdom on 20 October 2020
Verified Purchase
It pains me to write this bad review because I had big hopes for this book.
The writing style itself is good and even engaging however it feels like it was written for a very specific audience in mind. Greenberg is very biased and obvious which US political party he leans to.
The story that is being pushed in the book is very simple: Russia is in a "modern dark age" and is viciously unleashing its sinister cyber weapons on the West.

Cyber crime attribution is a very difficult and should be objective and with plenty of evidence. This book is telling us who did what and who is guilty without much evidence. Lots of speculation and not much evidence.

Buy this book if:
- You just want to reaffirm your political biases

Skip this book if:
- Looking for an objective treatment of the subject without a political baggage

Also the ending (when he goes to Moscow) is a bit ridiculous and made Greenberg quite childish and naive.
Read more
11 people found this helpful
Report abuse

Diana
5.0 out of 5 stars The best cyber book I ever read
Reviewed in the United Kingdom on 5 March 2021
Verified Purchase
This book is just fantastic. So well written and explained. You don't have to be a cyber professional to understand it as Andy Greenberg explains the term that are not that familiar. 100% recommend it and if you want to understand better the political reasoning for certain attacks, it's a must
Read more
3 people found this helpful
Report abuse

Cal Dugdil
5.0 out of 5 stars Interestingly terrifying
Reviewed in the United Kingdom on 26 November 2020
Verified Purchase
I was drawn to the book by a colleague who forwarded an extract from an article referencing Sandworm.

The detail is excellent and does not lose the unskilled Non-IT person.

Will make you want to ask questions in work but also made me sit up and take notice when my Prime Minister recently mentioned additional funds for cyber defence.
Read more
One person found this helpful
Report abuse

Amazon Customer
5.0 out of 5 stars brilliant
Reviewed in the United Kingdom on 22 December 2019
Verified Purchase
this is an excellent book covering many aspects of cybercrime, cyberwar and cyberterrorism. it reads like a thriler but is chillingly real. Along side the invesrigation and research into the malware by the titular group Sandworm it also provides a good history of prior strains unleashed on the digital world.

An essential read for anyone interested in digital security.
Read more
3 people found this helpful
Report abuse
See all reviews
Back to top
Get to Know Us
Make Money with Us
Let Us Help You
And don't forget:
© 1996-2021, Amazon.com, Inc. or its affiliates