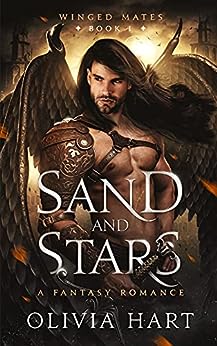 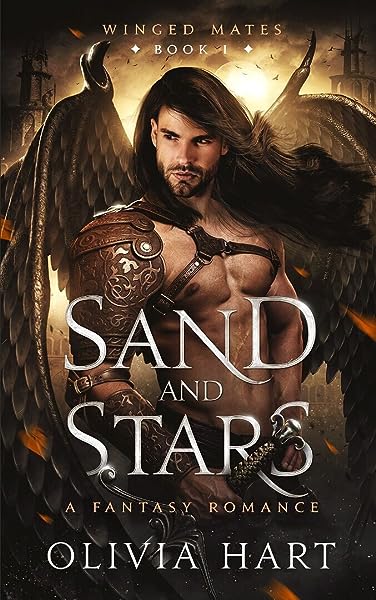 by Olivia Hart (Author) Format: Kindle Edition
See all formats and editions
Sorry, there was a problem loading this page. Try again.
He’s a beast who kills without mercy. My kidnapper. My enemy. My mate.

All I want is a simple life, but any chance of peace is stolen from me by a winged warrior prince. He sweeps through my village, leaving a trail of destruction in his wake—and taking me with him.

Born of battle, Marcellus is unstoppable. A storm of obsidian wings and steel who’s turned killing into an art form.

He says my visions hold the key to the hidden Elven kingdoms that his father’s vowed to conquer. Kingdoms I’ve vowed to protect with my life.

We’re on opposite sides of this war, and yet the dark and undeniable craving that sparked between us soon grows into a fire. It won’t be long until it consumes us both.

I’ve become his captive because of a prophecy. I’ll survive because fate has etched my name on his heart…

Olivia Hart is a fantasy romance author in love with all things out of this world. She writes about the darker side of fantasy romance with sassy heroines and flawed heroes. Join her mailing list to stay up to date on her latest releases, promotions, and news: http://eepurl.com/hqokzr

My overall rating for Sand and Stars is…

This book started off so strong, the world building especially caught my attention, but I slowly began to loose my interest towards the last half of the book. My first point to make is about the characters, they were introduced as an interesting, though not unique, pair and I loved their chemistry, but at around the 70% mark they just kind of disconnected. It was rather disappointing and made me loose interest in the entire tale. I found the steamy scenes were over symbolised, which made the whole thing awkward and unsatisfactory. There was also a revelation in the last few chapters that should have been a wow factor, but the character didn't even blink. Overall, the writing and story started off as exciting and different, but couldn't hold my interest; however, I do think this book will appeal to many new adult fantasy readers.
Read more
Helpful
Report abuse

Rachel Osborne
TOP 500 REVIEWER
4.0 out of 5 stars Good solid start!
Reviewed in Australia on 26 July 2021
I really enjoyed this book. It did take a bit for me to get into the story but once I got in, I loved it. There's magic, prophecies and lots of adventure. It was a fun read that had me intrigued by the characters right from the start. I liked the plot, it really built up even with the slow start but I really enjoyed the book. The writing was great, lots of details and action. I'm really looking forward to what happens next. Having read Olivia Hart's books before, I knew that this story was going to be great. I wasn't disappointed. Looking forward to the next book!
Read more
Helpful
Report abuse

Kindle Customer
5.0 out of 5 stars Flames and fire
Reviewed in Australia on 14 September 2021
Wow what a great story. Its so nice to pick up a book that takes some time to read and not finished in 2 hours. Talia is a girl that only wanted a simple life. But when a band of soldiers come tramping though her village her life is for ever changed. This story line is so not like the others out there with Strong emotions and growth is portraited and some very great plot development has been established. I'm looking forward to book 2 ember and ash.

I received an advance review copy for free, and I am leaving this review voluntarily.
Read more
Helpful
Report abuse

K Huskić
4.0 out of 5 stars Book 1 of the duology
Reviewed in Australia on 22 July 2021
This started off a little slow to me, but I ended up liking it more as I read. Talia had an awesome power (& responsibility) but I do wish she didn't back down so easily. I liked Marcellus, even though little things he did bugged me, but overall I liked the plot and the characters.

This wasn't my favourite book from this author, but was a solid start to the duology. I do want to read the final book to see how it all plays out.
Read more
Helpful
Report abuse

Tash
4.0 out of 5 stars Interesting story
Reviewed in Australia on 25 July 2021
While I think the story was a bit slow to start, I really enjoyed reading it. I am hoping Talia will become stronger/ less timid during the next book and I look forward to seeing what happens next. The book has lots of action and adventure once it gets started and some interesting developments.
Read more
Helpful
Report abuse

Fiction Addiction
TOP 1000 REVIEWER
5.0 out of 5 stars 5 stars ⭐️
Reviewed in Australia on 25 July 2021
Verified Purchase
I received an advance review copy for free, and I am leaving this review voluntarily.

OMG I loved this story. Can a mere female elf, who is the prophet that can see the future, help defeat a tyrant king and bring peace to the land? Can she save herself, and the love of her life, the solen fae son of the tyrant king? I was so wrapped up in this adventure I literally could not put the book down. I loved the characters, and the range of emotions they went through to find each other. The storyline is fantastical, a true adventure into the realm of humanity, elves, faes, magic and mystical creatures. This is the first in a duet, with the story continuing with the upcoming war.
Read more
Helpful
Report abuse
See all reviews

jenni
5.0 out of 5 stars How dramatic
Reviewed in the United Kingdom on 22 July 2021
Verified Purchase
This is a deep read full of drama and heartache. The characters have a great deal of not only hatred but love in their hearts. It is easier for some to love than others.
Talia is a strong character with a big heart. Is it big enough to defeat the worst of the worst?
Marcellus is deep and dark and unsure of his place but will she bring out his light?
Can they win a war together time will tell as the story unfolds.
Read more
Report abuse

Maureen
5.0 out of 5 stars Fun Fantasy tale
Reviewed in the United Kingdom on 27 July 2021
Verified Purchase
High fantasy romance, with elves, faes and prophecies, alongside a forbidden romance. This is the second series I've read from this author, and she's fast becoming a favourite! Can't wait for the second book in the duet!
Read more
Report abuse

Pat W
5.0 out of 5 stars Fantastic
Reviewed in the United Kingdom on 22 July 2021
Verified Purchase
Action and plenty of adventures throughout this book. Characters drew me and and the storyline was super. What a start to a new series
Read more
Report abuse

Jasmine Voosen
5.0 out of 5 stars Loved it!
Reviewed in Canada on 26 July 2021
Verified Purchase
Sand and Stars by Olivia Hart is the first book in the Winged Mates Series, and it doesn't disappoint. The author stuns us with a details that paints us into this tale. I mean a hot man with wings, a prophesy, anger that turns into passion...I loved this first book and can't wait for the second!!!
Read more
Report abuse

Flynne
1.0 out of 5 stars Where do I start?
Reviewed in the United States on 19 August 2021
Verified Purchase
I am so glad I read this book for one reason: as an aspiring author of fantasy romance, it is a shining example of everything I never want to write.

Nothing about the writing brings the characters or world to life. Everything relevant is told to you and there's nothing to infer. The love is instantaneous (marriage proposal, sex, and "I love you" by 50%, in that order) and pitifully lacking in any real emotion. The entire book lacks any kind of depth.

The prologue hinted at promise. There, the writing wasn't so stilted and godawfully simple. However, once we got to Talia's point of view... It was like reading the thoughts of a twelve year old. The sentences are so short and to the point, and there are no metaphors or anything that isn't perfectly literal. It's practical, not creative. That is acceptable in many situations but a fantasy book is not one of them. I only stuck it out to the end because I'd hoped maybe--just maybe--the prose would improve as Talia grew. No such luck.

In fact, Talia never grew in any noticeable way. Her thought process was non-existent. Everything is "I believe this" or "Now I believe this." There's no questioning the world. She rebels against Marcellus for a few scenes, is kissed by him, then turns into mush around him for the rest of the book. Honestly, it was sad. Then she has the balls to be mad at him for his cruel father imprisoning and torturing her, because *gasp* he should have known it would happen and protected her like the incapable weakling she was. Even then, any time they had a disagreement, it was cleared up immediately. There was no tangible tension between them and in a romance book, that's unforgivable.

Okay, so... maybe the sex was good? Sadly, no. No, it wasn't. The "steamy" scenes were lukewarm at best. Talia and Marcellus have *nothing* going for them. Both are utterly forgettable.

Also, the dialogue was formatted incorrectly throughout the entire book, and it required a bit of interpretation in some places. For example:

“I only ask for one thing in return,” I said as I began to walk across the clearing. I could already hear that twisted, broken rhythm coming from him. “Just a tiny thing. A kiss.”
“And then, if you still want to force me, I will find the gate, and I will open it.” My words were confident and clear, but he seemed confused.

There shouldn't have been a ” after “A kiss,” because the speaker never changes. I realize this is probably a nitpicky thing, but it bothered me. Anyone claiming to be an author should know this, and certainly anyone claiming to be an editor. There were also a few omitted or misspelled words, but not many.
Read more
3 people found this helpful
Report abuse
See all reviews
Report an issue
Does this item contain inappropriate content?
Report
Do you believe that this item violates a copyright?
Report
Does this item contain quality or formatting issues?
Report