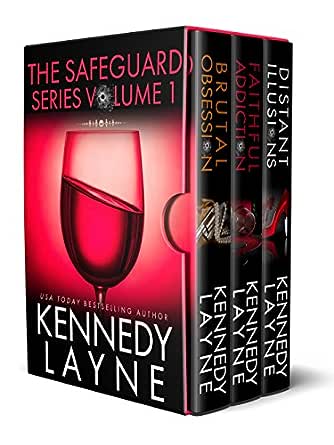 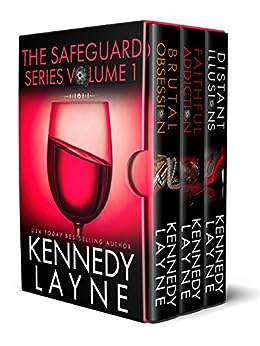 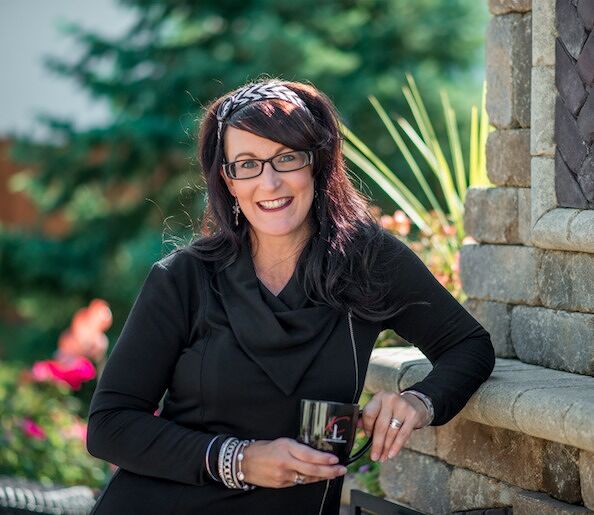 From USA Today Bestselling Author Kennedy Layne comes a thrilling romantic suspense series that will leave you on the edge of your seat...

Ashlyn Ellis never expected her plea for assistance to materialize in the form of Keane Sanderson--the one man who had every reason to revel in her misfortune. She's finally given the chance to rekindle the flames of desire she never should have extinguished, just in time for it all to be taken away when a stalker takes his obsession a step too far.

Royce Haverton doesn't like surprises, so walking into the office to find an old family friend desperate for a favor certainly doesn't make his morning. Neither does discovering a cold-blooded murderer is after the one woman who had once meant everything to him. Will he and Cailyn be given the time to explore the still smoldering desire that lies beneath the surface before a ruthless killer tries to finish what he started?

Brody Novak and Remy Kinkaid must work together to hunt down a murderer, despite their growing attraction. It isn't safe to give in to their desires when the killer is always one step ahead of them. It's only when the sadistic killer stumbles that Remy is finally given the opportunity to face her past in order to have a future.

Series Description: Safeguard Security & Investigations (SSI) is owned and operated by Townes Calvert, a retired Marine Gunnery Sergeant who returned home to the States a bit more damaged than he'd care to admit. Not that anyone could tell outside of a very select group of former active duty buddies. It had taken Townes quite a while to acclimate to civilian life and he'd kept himself busy in the interim working in treacherous situations with even more dangerous friends. The final result is a close-knit unit of highly trained former military men who have the experience to protect the innocent, investigate crimes on the gritty edge, and aid local law enforcement when justice has taken a back seat to political correctness. Follow along as Kennedy Layne conveys each of their gripping stories as they work together on investigations that lead them down perilous paths of passion, intrigue, and suspense...

Shelley
TOP 50 REVIEWER
5.0 out of 5 stars Safeguard Series:)
11 February 2018
Format: Kindle Edition
I have already reviewed this series under the individual books by Kennedy, but have put them together for the box set!

Brutal Obsession - This new series from Layne packs a powerful punch! Keane is ex-military and ex-SWAT, looking for something more in his life other than adrenaline. So when Townes gives him a job with SSI he moves to Florida. His first assignment is not what he expected and ends up with him having to protect the one that got away. Ashlyn is a Federal Prosecutor and is being stalked! She finally calls in the FBI and ends up being protected by Keane, the only man to make her feel anything. Against all odds and circumstances, they rekindle their feelings, but first they have to stop the stalker from achieving his objective!

Faithful Addiction - Wow what a great follow up book to the first in this new series. So Royce, is now working for SSI and he has been contacted by an old friend to say that his sister's life is in danger and they could use Royce's help. Cailyn isn't sure someone is after her until their third failed attempt. Everyone is a suspect and eventually they narrow down options... to say the person trying to kill Cai was a surprise is an understatement! Fantastic read, couldn't put it down:) Anxiously awaiting the next book....

Distant Illusions - First off I love Layne's books. This one was a little less action packed than the previous two books which is the reason for my 4 star rating. The reason I believe it was less action packed was due to Brody being more of an IT nerd than a person who goes into the field. That said though, the writing and story flow beautifully!!

Brody is given the assignment to protect Remy, after the man who brutally murdered her sister is released from a mental institution after a four year stint. The company she works for has hired SSI to give her around the clock protection as he threatened her when he was at trial. However, Remy has grown stagnant in her life in that she is focused on him going back to jail or to the morgue in a body bag. What she doesn't realise is that someone close to her is pulling strings and once the traitor is determined, will blow her mind. But her and Brody have grown close with the events occurring around them and she finally has someone to lean on and isn't alone like she first thought:)

Ellen Oceanside
5.0 out of 5 stars GOOD STORIES TO THE END
16 July 2019 - Published on Amazon.com
Format: Kindle EditionVerified Purchase
BRUTAL OBSESSION
Tight, tense drama, innocent lives are taken, even in the safe house, she was still not safe. He had knowledge beyond anyone else with technical ability to see her ever move, at home, at work. How, he did it, I figured it out, well thought of idea. A casual remark, he took to mean so much more. Gripping to the very end.
FATAL ADDICTION
Cailyn has been a victim of hit run accidents, to the point they know it is no accident. She is an investigator reporter writing apiece about the sister of a serial killer. Her brother brings in added security, which was a man of whom she had a past with. The damage that was done by an uncle hurt so many lives.back then. He was there to protect her, the person is determined to kill her, and is invading her space even at home. Can there be more for them, and keeping them all safe. Good mystery
DISTANT ILLUSIONS
Remy thought peace would finally come after four years, instead she got the news her sisters killer was granted patrol. It bothered her, four years equate to a young life taken. She was watching his moments, till her boss interved and hired a place and protection for him. Brody his first assignment with Safeguard. Information is getting out and a friend of hers has been attacked, trying to draw her out. He is illusive will it ever end, and readers will be surprised by why.
Good series, all three had good plot, and keep you to the end.


Read more
Go to Amazon.com to see all 1 reviews 5.0 out of 5 stars
Get FREE delivery with Amazon Prime
Prime members enjoy FREE Delivery and exclusive access to movies, TV shows, music, Kindle e-books, Twitch Prime, and more.
> Get Started
Back to top
Get to Know Us
Make Money with Us
Let Us Help You
And don't forget:
© 1996-2020, Amazon.com, Inc. or its affiliates