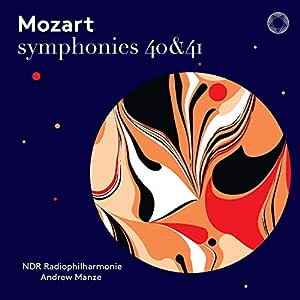 Considered to be the highest triumph of instrumental composition in his own day, Mozarts final symphonies continue to sweep audiences away. From the famous G-minor opening movement of the 40th symphony that cuts straight to the chase to the unprecedented complexity of the 41st symphonys majestic finale, Mozart displays his vivid melodic invention as well as the maturity of his old musical soul. Even if his untimely death came unexpectedly, these two symphonies fill the listener with a sense of culmination, and may be seen as a sublime conclusion of both Mozarts musical development and of the eighteenth-century symphony in general. These extraordinary works are performed here by the NDR Radiophilharmonie and Andrew Manze, and will be followed by a recording of Mozarts 38th and 39th symphonies. With their first Mozart album, conductor and orchestra extend their successful Pentatone discography that already contains the complete symphonies of Mendelssohn, crowned with a 2017 Jahrespreis der deutschen Schallplattenkritik.

Lee H. Larue
5.0 out of 5 stars Amazing versions of these two great symphonies
29 July 2019 - Published on Amazon.com
Verified Purchase
I like this version, especially since the conductor takes all the repeats. There is grandeur, pathos, beauty, genius. Which also sums up the accomplishments of Mozart!
Read more

John J. Puccio
3.0 out of 5 stars Manze's performances are quite stirring if a little lacking in refinement and polish
2 September 2019 - Published on Amazon.com
Need I mention at the outset that Pentatone recorded this disc live? I don't suppose I have to, considering that given the state of finances in the record business, probably three-quarters of the all the orchestral recordings made these days are done live. Fortunately, Pentatone do live recordings as well or better than anybody, so it's not a total loss; and if you enjoy live recordings, you'll love this one.

On the present disc we have the familiar pairing of Mozart's final two symphonies, Nos. 40 and 41 "Jupiter," here done by the NDR Radio Philharmonic under its estimable chief conductor Andrew Manze. And in hybrid multichannel SACD no less.

You may remember that Maestro Manze has made my list of favorite recordings twice, in 2012 and 2018. He has specialized for many years in repertoire from the late seventeenth to early nineteenth centuries as the Music Director of the Academy of Ancient Music from 1996 to 2003, then the Artistic Director of the English Concert, both period-instrument groups. Since 2006 he has been the Principal Conductor of Sweden's Helsingborg Symphony Orchestra and now Germany's NDR Radio Philharmonic, who play on modern instruments. It makes no difference; Manze brings with him the adventurous sensibility of a period-instrument conductor, and we are all the better for it.

Anyway, considering that Mozart's last few symphonies are among the most popular pieces of classical music in the world and that practically all classical-music fans have multiple recordings of them in their collections, I figured since I had reviewed these before, anyway, they needed little introduction. But to my surprise, when I sat down to write about them, I found I had only reviewed the final symphony twice and No. 40 not at all. So, with that in mind, let me provide a touch of background on each.

Austrian composer, violinist, and pianist Wolfgang Amadeus Mozart (1756-1791) wrote his Symphony No. 40 in G Minor, KV550 in 1788. People sometimes refer to the work as the "Great G Minor Symphony" to differentiate it from the earlier "Little G Minor Symphony," No. 25. Music scholars conjecture that Mozart composed all three of his final symphonies at around the same time and may not have actually heard any of them performed, dying relatively young as he did.

Manze takes a fervent swing at No. 40. His direction is brisk to the point of being almost frenetic. He's a dynamic conductor, to say the least, but here he seems to go a little overboard. My personal preference is for Mozart's music to have a bit more refinement to it. He was writing during the "Age of Reason," after all, the Enlightenment, the Classical Period in music. One might expect a degree more subtlety than the hell-bent-for-leather approach Manze takes. That said, there is no doubt the conductor's reading is passionate and exciting, which go a long way toward selling the concept.

As with No. 40, Mozart wrote the Symphony No. 41 in C Major, KV551 "Jupiter" in 1788. It got the nickname "Jupiter" not from Mozart but most likely from the impresario Johann Peter Salomon, who figured to capitalize on the symphony's comparatively grand structure.

In the "Jupiter" Maestro Manze continues with much the same red-blooded attack he exhibited in No. 40. With extreme dynamic contrasts, vigorous tempos, and pointed emphases, he offers up another rousing interpretation at the expense of some of the music's more cultivated, polished, genteel, even humorous qualities. Again, however, Manze's music-making is also quite stirring, so it's bound to appeal to folks tired of overly sophisticated or overly polite presentations. And there's no denying that Manze's fiery finale leaves one exhilarated, to say the least.

In the final analysis, for robustly energetic performances of these symphonies, I would continue to recommend those of Daniel Barenboim for EMI with the English Chamber Orchestra from the late 1960's. His smaller ensemble is more transparent and better adapted to this sort of approach, and the recordings sound better, too.

Producers Renaud Loranger and Matthias Ilkenhans and engineer Daniel Kemper recorded the symphonies live at the Groser Sendesaal des NDR Landesfunkaus Hanover, Germany in February 2017 and March 2018. They recorded the disc in hybrid SACD, meaning you can listen to it in multichannel SACD or two-channel SACD from an SACD player or in regular two-channel stereo from a regular CD player. I listened in two-channel SACD.

The first thing noticeable about the live sound is its enormous dynamic range. It goes from barely a whisper to extraordinarily loud, sometimes from one moment to the next. It's realistic but maybe a little disconcerting. There is also a good dynamic impact to the notes and a wide frequency range. All to the good, as is the fact that the engineers of this live recording have removed most of the audience noise and applause. Unfortunately, even though the engineers miked the orchestra a little farther away than is the case with so many live recordings, you can still tell they did it live from the rather bright, sometimes strident quality of the sound. It's not as smooth as what they might have obtained in a studio.

A glut of recent releases may have turned Mozart’s late symphonies into more of a commonplace than they already were, yet in a crowded field Andrew Manze’s new pairing of Nos. 40 and 41 is worthy of consideration, especially No. 41. Whereas some interpretations of these works sacrifice detail for fluency and others do the opposite, in this recording not only are both qualities present but the one nourishes the other. Nowhere is this more apparent than in the Andante of No. 40, where a moderate tempo throws the movement’s inner harmonies into relief as they propel the music’s argument through delicate dynamics and a restless pulse. For a slow movement this is exciting stuff.
The NDR Radiophilharmonie is anything but plush. The orchestra’s signature sound is neither rich velour nor the hard wood of self-denial, just forthright and lightly padded at best. It’s a character that suits Mozart admirably; indeed, the only substantial reservation about Manze’s reading of the 40th is a lack of introspection. The music’s dark undertow has been more dramatically conveyed elsewhere. The English conductor’s Menuetto dances happily but without the caustic edge that defines its character: It is a shade too Classical and genteel. The finale, while vivacious, is emotionally cool and communicates little beyond the notes themselves.
Gears grind upwards for the significantly more highly charged “Jupiter.” Manze embraces the final symphony’s theatricality and offers an opening Allegro vivace of churning drama, color, and excitement. More than a year elapsed between the recordings of the symphonies, during which interim he seems to have developed an emboldened approach to Mozart’s last symphonic utterances. With its vital arguments, startling silences and a coherent momentum, here at last is music-making with something to say. The ineffable Andante cantabile has a sophistication that points the way to a future direction the composer was destined never to take. It is a model construct of musical substance and subtle orchestration that seems to anticipate mature Beethoven, and Manze clearly views it as such. The ensuing Menuetto, anything but dainty, makes an expertly weighted bridge into Mozart’s bristling Molto allegro finale. All in all, this is a remarkable “Jupiter.”
Read more
Go to Amazon.com to see all 3 reviews 4.0 out of 5 stars