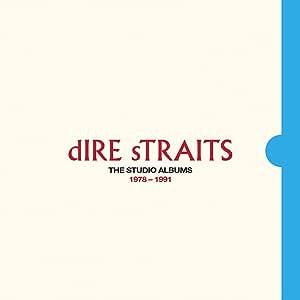 The Rock and Roll Hall of Fame will induct Dire Straits in April, honoring the legendary band's incredible musical legacy Rhino will kick off the celebration early with a career spanning boxed set "The Studio Albums 1978-1991."-Formed in 1977, Dire Straits, led by Mark Knopfler, were one of the iconic groups of the late 20th Century. THE STUDIO ALBUMS 1978 – 1991 brings together all six of the band's studio albums. - DIRE STRAITS (1978)- COMMUNIQUE (1979)- MAKING MOVIES (1980)- LOVE OVER GOLD (1982)- BROTHERS IN ARMS (1985)- ON EVERY STREET (1991) -All albums have been re-mastered, with all original artwork restored, the six albums are packed in a handsome box set slipcase.

B. Foster
2.0 out of 5 stars Not about the music quality
Reviewed in the United States on 18 October 2020
Verified Purchase
(This review is in no way intended to reflect poorly on the music of Dire Straits.....some of my most favorite recordings over the past 40+ years.)

For people who already own a copy of one or two Dire Straits albums, and would like to follow up with (nearly) the balance of their catalog, this package would be an economical way to do that. For all other fans who already own all of the studio albums, the net gain with this compact reissue is a few inches of shelf storage space. All recordings here are the same remasters from the 2000 Warner Brothers reissue series, despite some early buzz implying more recent remastering. Even though the 2000 editions still sound really clean, it would have been interesting to hear what 20 years of technology improvements, in the right hands, could have done with the original material (such well-crafted songs, immaculately produced!).

Absent that, about the only other thing we slobbering fans wanted to see in this package (assuming no vault material exists) would have been the never-reissued1982 "Dance" EP (Twisting By the Pool, Two Young Lovers, If I had You, Badges Posters Stickers and T-Shirts), as well as possibly the 1983 Alchemy Live recordings.

A higher price tag would have gone mostly unnoticed too if we had been treated to updated mastering and some additional material.

Serkan Okar
5.0 out of 5 stars Great collection of Dire Strait's 6 studio albums
Reviewed in the United States on 14 October 2020
Verified Purchase
I've been tracking this collection for the last 2 years. It was first released, I believe, 2 years ago and then went out of print (you could only find it as second-hand in black market prices). It was scheduled to release last year Oct 2019. Then my order got cancelled because it wasn't clear whether it was going to be released. Then again early this year, it became available for pre-order and I ordered it (once again). I'm so glad I picked it up. I've always loved Dire Straits. Brothers in Arms is one of my all time favorite albums and one of the top 10 albums of the 80s. They were pioneer in so many ways: for instance, they were the first one to record completely digitally; Brothers in Arms was the first album that was recorded digitally and released on CD. If you love Dire Straits or their kind of rock music, this is a must-have essential collection that deserves a place in your collection.
Read more
4 people found this helpful
Report abuse

Samuel Owens
4.0 out of 5 stars Great sounding vinyl but some of the smaller details were neglected
Reviewed in the United States on 17 October 2020
Verified Purchase
Somewhat disappointed in this box set. First off and most importantly, they sound great. What I am not crazy about is the sleeve opening being opposite the binder with the album label. Therefore, if you want to read the album names be careful when slipping them out of the box that houses all the records. Or else your record is going to land on the floor. Secondly, I wish there was a better protective sleeve. I used master sleeves to store mine because I don’t like storing my vinyl in a cardboard sleeve. Lastly, I’ve noticed some typos with the song lyrics on the self titled album. With the hefty price tag, I expect all the details to be considered in the complete package to be the highest of quality. I compare this to my Abbey Road half masters credence box set which is definitely five out of five stars.
Read more
4 people found this helpful
Report abuse

DiamondPilot
3.0 out of 5 stars Great music, Great value, but the remastering is inferior to the original CD releases IMO
Reviewed in the United States on 30 October 2020
Verified Purchase
The music is of course excellent, as is the value of the packaged set.

I already owned the original CD releases (circa 1980s) of Brothers in Arms, Making Movies, and the first album.
I bought this to complete the catalog.

Unfortunately, the remastering muddied up the midbass, narrowed the dynamic range (a by-product of brickwall limiting to increase recorded volume level e.g. LUFS), and subtly coarsened the treble peaks.

I prefer the orignal masters, but then again I usually do.

Like most remaster jobs with modern hallmarks, it might sound subjectively better to average ears on average equipment, but not to critical ears on better gear.
Read more
2 people found this helpful
Report abuse

D. Williams
5.0 out of 5 stars Great Albums...Need More!
Reviewed in the United States on 15 October 2020
Verified Purchase
I'm a huge fan of Mark Knopfler and Dire Straits. I have all of the solo albums and soundtracks. This box is great if you dont have any DS in your collection. For a longtime fan, it would have been nice to get at least the Twisting By The Pool EP on cd or some other bonus. I'm still waiting for a proper DS archival release! It's been a long time since Live at the BBC!
Read more
3 people found this helpful
Report abuse
See all reviews
Get FREE delivery with Amazon Prime
Prime members enjoy FREE Delivery and exclusive access to movies, TV shows, music, Kindle e-books, Twitch Prime, and more.
> Get Started
Back to top
Get to Know Us
Make Money with Us
Let Us Help You
And don't forget:
© 1996-2020, Amazon.com, Inc. or its affiliates