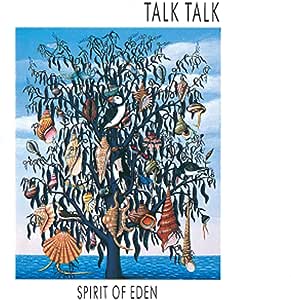 Heavyweight 180gm vinyl LP pressing including a DVD-Audio disc containing the album delivered as a 96kHz/24 bit LPCM stereo mix. Plus one bonus track. Digitally remastered edition of this 1988 album from the British outfit. While their first two albums were commercially successful and their the Colour of Spring album had found the band moving towards a more sophisticated and mature sound, the Spirit of Eden found the band even further away from their earlier works, creating a sound that has now been referred to as Post-Rock. EMI.

4.7 out of 5 stars
4.7 out of 5
477 global ratings
How are ratings calculated?
To calculate the overall star rating and percentage breakdown by star, we don’t use a simple average. Instead, our system considers things like how recent a review is and if the reviewer bought the item on Amazon. It also analyses reviews to verify trustworthiness.

Mark A
5.0 out of 5 stars A BEAUTIFUL MASTERPIECE
Reviewed in the United Kingdom on 7 April 2017
Verified Purchase
By the time Mark Hollis and Talk Talk had arrived at Spirit of Eden all remaining traces of the commercial pop of their first two albums had truly gone. The Colour of Spring marked the watershed into the zen like beauty of what was to come...and then came Spirit of Eden and Laughing Stock. Spirit of Eden is a masterpiece. Beautifully constructed; an album where the spaces and quiet are just as important as the notes and the noise. Just occasionally the calm is shattered by rising crescendos or sudden infusions of sounds. There are tinges of jazz, prog rock, even the odd nod to 80s synth pop, but overall the lasting impression is of an album where you sit, listen, immerse and come out of the other side in a better place than where you started.
Read more
60 people found this helpful
Report abuse

James B. Spink
5.0 out of 5 stars Spirit of Eden – probably Mark Hollis and Talk Talk’s masterpiece
Reviewed in the United Kingdom on 28 February 2019
Verified Purchase
Like many other people recently I had another listen to Talk Talk’s back catalogue upon learning of the passing of the band’s composer and singer, Mark Hollis. I still collect music on vinyl and the inclusion of a bonus audio DVD made this particular version of Hollis’s masterpiece “Spirit of Eden” well worth adding to my collection. I wont comment on the music itself, as many others have already done so over the years, but I would suggest hearing it before purchasing if you only know Talk Talk’s singles from the early eighties – this is not like that!

Other reviewers have commented on the surface noise from the vinyl version but, because of the quiet nature of the music featured on Spirit of Eden, noise is inevitably going to be more noticeable than on loud rock music – it is the price you pay for analogue audio and not necessarily a faulty pressing. The LP is made from decent 180 gram vinyl so is nicely weighty – but even so you cannot completely eliminate surface noise from the medium - if you don’t want pops and crackles then buy the CD version instead. However, you do get a bonus with this LP in the shape of a DVD-Audio, which contains a 96kHz/24 bit LPCM stereo mix of the album, which I have played on my Blu-ray player through my TV soundbar and it sounds pretty good with no surface noise! The DVD contains the six album tracks plus “John Cope”, the B-side of the 1988 single “I believe in you” - which was an edited version of the album track; the disc comes tucked inside the album’s sleeve.

This LP/DVD package has been up and down in price over the last few days and if you catch it at around twenty pounds it is a bit of a bargain. Although all of Talk Talk’s music is now rather sadly due a reassessment with the passing of Mark Hollis, I would personally recommend a listen to Spirit of Eden – I wish I had paid more attention to their later music at the time!

t glynn
5.0 out of 5 stars Sheer Bliss.
Reviewed in the United Kingdom on 25 February 2020
Verified Purchase
In general I am no fan of 1980s music and there are very few records released during that decade that would feature in my list of favourite albums. Spirit of Eden, however, is not just any old 1980s album, it is a true work of art. It was with great sadness that I heard recently that Mark Hollis had left this world behind and I'm sure that during his too-brief time here he had many achievements both musically and in his personal life, however, I can't imagine any greater achievement than an album that lifts the very soul of the listener the way that Spirit of Eden does. The whole album is amazing but my personal favourite is 'I believe in you'...why? Because it's just a perfect song which, combined with Mark Hollis's irreplaceable voice, takes you to another place; a place where everything is good and kind and is a million miles away from a world that is becoming increasingly ugly. Thank you so much Mark and bless you.
Read more
8 people found this helpful
Report abuse

Mr Y
5.0 out of 5 stars and never questioned my belief that this is one of the best (in terms of music IMO) recordings of the last ...
Reviewed in the United Kingdom on 10 June 2017
Verified Purchase
I owned this album albeit in the digital age before Q magazine gave it 5 stars with a closing statement of 'A Record of Beauty'.

Despite having the machinery to play a 12" vinyl version I persisted with the CD for close to 30 years? and never questioned my belief that this is one of the best (in terms of music IMO) recordings of the last 40 years.

The other day I just bought the LP. As I have done for one or two other back catalogue items recently.

I'm into Post Rock (Sigur Ros, Mogwai) plus Radiohead and Elbow, and I can hear this albums (plus Laughing Stock's) influences all over their work.You kind of feel that nowadays most bands would not have the talent or bravery to make such a record, plus I imagine record companies would not encourage it either. Perhaps Radiohead have got the closest in terms of talent and progression in their music over their careers, plus they are mostly able to do what they want. But I would argue that this album stands out as an essential body of work in terms of musical influence, showing bands what is possible and just being so damn perfect. And I am pretty sure that if it was not for this then a lot of my favourite bands would not be so good.
Read more
23 people found this helpful
Report abuse
See all reviews
Get FREE delivery with Amazon Prime
Prime members enjoy FREE Delivery and exclusive access to movies, TV shows, music, Kindle e-books, Twitch Prime, and more.
> Get Started
Back to top
Get to Know Us
Make Money with Us
Let Us Help You
And don't forget:
© 1996-2020, Amazon.com, Inc. or its affiliates