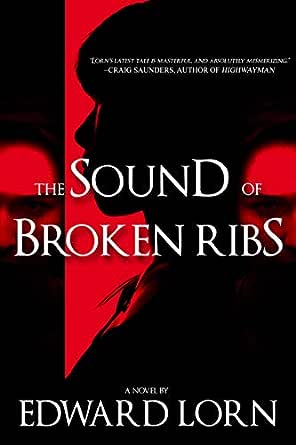 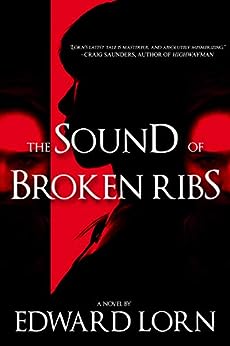 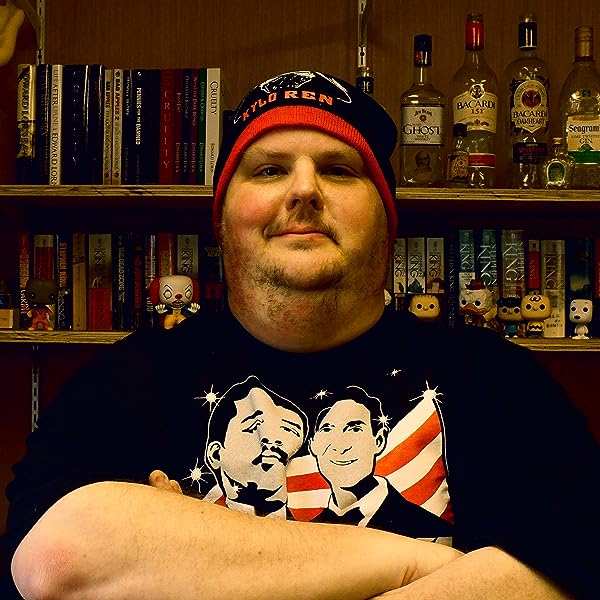 Edward Lorn (E. to his friends) is a reader, writer, and content creator. He's been writing for fun since the age of six, and writing professionally since 2011. He can be found haunting the halls of Twitter, Facebook, Instagram, Tumblr, and Goodreads. E. lives in Alabama with his wife and two children. He is currently working on his next novel. --This text refers to the paperback edition.

3.9 out of 5 stars
3.9 out of 5
22 global ratings
How are ratings calculated?
To calculate the overall star rating and percentage breakdown by star, we don’t use a simple average. Instead, our system considers things like how recent a review is and if the reviewer bought the item on Amazon. It also analyses reviews to verify trustworthiness.

The Grim Reader
TOP 1000 REVIEWER
4.0 out of 5 stars Top notch story telling.
Reviewed in Australia on 8 June 2018
Verified Purchase
I’ve read a couple of books by Edward Lorn and enjoyed them immensely. However, I approached The Sound of Broken Ribs with a little caution. I know E is a huge Stephen King fan and after reading the synopsis I was wondering if this was going to be a little too similar to King’s Misery.

I needn’t have worried, Lorn is a pretty smart cookie and The Sound of Broken Ribs is nothing like Misery at all. There are many positives to be found in this book. The violence, whilst sporadic, is brutal. It’s both unflinching and realistic. There is something to be said about the way a writer describes a bullet entering the body, or the collapse of an organ, the protruding of bone. Lorn is excellent at doing this, one of the best, and his writing style is crisp and clear. Another great aspect of this book is the dialogue. All the character interactions are well written. The dialogue is lifelike and the characters come to life on the page. The pacing is also very good. Events take place in the fictional town of Bay’s End, a place where the locals like things just the way they are, they don’t like outsiders and they look after their own.

There is a nice balance between characters you despise and characters you sympathise with. Lei Duncan’s unfortunate situation will make you thirst for revenge. She is simply the wrong person in the wrong place at the wrong time and the hit and run sets off a dramatic chain of events. The bodies begin to pile up and Lorn simply runs and has fun with it.

The only aspect keeping this from being a five-star read is the ending. Whilst it was different and I certainly didn’t see it coming I question whether or not it was entirely necessary. But, that’s just my opinion, and this is still a damn fine novel.

Amazon Customer
5.0 out of 5 stars Blew me away
Reviewed in Canada on 1 May 2019
Verified Purchase
This is my favourite of Lorn's books so far.
You can't go wrong with Edward Lorn if you're into horror!
Read more
Report abuse

J. Holmes
3.0 out of 5 stars Failed to deliver
Reviewed in the United States on 14 September 2018
Verified Purchase
I learned of Edward Lorn's The Sound of Broken Ribs through Instagram. I saw the cover in someone's post and was intrigued by it as well as the title. Since I'm a fan of the horror genre, I decided to look it up. Based on the cover and description, I decided to give the book a try and ordered it. I received it a few days later and eagerly dove into its pages. What I found left me...confused.

The concept of the book is good but familiar. Character A has everything. Character B loses everything. Their paths cross. Mayhem abounds. Lorn offered a twist that kept me interested just enough to read the entire book, and that twist is the personification of Pain. As someone who is intimately familiar with the pain of broken bones, I was interested to see where Lorn would take this personification. Sadly, the potential I saw didn't pay out in the end.

Overall, I'm conflicted by Lorn's book. I had no connection to the characters so I didn't feel as though they were in jeopardy. Honestly, I didn't care of any of them lived or died, and this was one of my main issues with this book. Lei Duncan is the protagonist, if there can be a clear cut protagonist-antagonist relationship here, but I know nothing about her other than she's a writer with a supportive husband and an obsession for running. Beyond this, Lei Duncan is a mystery. That mystery made for a lack of empathy for her. Yes, she finds herself in dire circumstances. Yes, I had a moment of "Wow, that sucks." However, I felt no compulsion to cheer for her, to urge her forward in her story. She was a flat character.

The same can be said of the antagonist, Belinda Walsh. She, too, finds herself in dire circumstances with a crappy husband and insane brother, and that's all I really know of her. So she's as flat and one-dimensional as Lei Duncan. Beyond a "It sucks to be you" moment, I couldn't find empathy for her either. As a reader, I want to identify with characters in some way. If it's the protagonist, I want to urge them forward. If it's the antagonist, I want to root for their downfall, or at least understand why they've gone down their dark path. None of this is provided by Lorn for either of these characters.

Another concern was the overall writing itself. I want to be shown a story, not told a story. I want to sink into a character's point of view so I can imagine being that character. Lorn's writing kept me at arm's length. For example, the opening paragraph of The Sound of Broken Ribs is two sentences:

"In forty-five minutes, she'd be fighting for her life. But, for now, Lei Duncan was typing The End."

Don't tell me she's going to be fighting for her life, show me that fight. Show me Lei Duncan propelled fifty feet in the air when a car smashes into her. Make me feel the car's impact, the sense of weightlessness, and the impact of hitting the ground. Make me feel bones breaking. Make me feel like what it's like to cling to life by the broken tips of once perfectly manicured fingernails. Make me feel as though Lei Duncan--and therefore, I--have a reason to live, and then make me feel the struggle to claw my way back from the edge of the abyss. This is supposed to be a horror story. Give me a reason to put the book down and an even bigger reason to pick it up again. Give me suspense. Give me insidiousness. Give me a creeping chill that makes me believe there's something dark, formless, and hungry stalking me. Give me horror.

As I stated before, I'm conflicted by The Sound of Broken Ribs. I see so much potential beneath the surface, but overall, Edward Lorn fails to deliver on that potential.
Read more
3 people found this helpful
Report abuse

Michael Louis Dixon
2.0 out of 5 stars Does Not Measure Up
Reviewed in the United States on 18 April 2018
Verified Purchase
Based on all the other reviews, I was looking forward to reading this. The Extreme Horror subgenre is full of excellent work by some amazing talent--Wrath James White, Edward Lee, Jack Ketchum, and J.F. Gonzalez to name a few. In my opinion, Edward Lorn's THE SOUND OF BROKEN BONES does not measure up. While his skill at writing is acceptable, it's the two dimensional characters that weaken the story. Motivations are so stretched that they read as random and unbelievable. To me, and I remind you that this is only my opinion, the issues of misogyny and homophobia feel shoe-horned in. The power of these topics in our culture is worth exploring, show us in an unflinching eye the true horror of these extreme examples of hate, but here in this book they feel leveraged solely for shock value and with zero substantive purpose. I don't mind characters that I feel loathing for, that make me mad at how awful they are as human beings, but you lose me when their actions stem from ludicrous motivations and ham-fisted plotting. I found myself having a difficult time picking the book up once I'd set it down. Each time I started back in, I'd soon be rolling my eyes again. Well, at least I finally powered through it.

Steven Gomzi
5.0 out of 5 stars An entertaining action packed thrill ride!
Reviewed in the United States on 30 August 2018
Verified Purchase
4.5 *’s You do not want to be a character trapped in an Edward Lorn story. And don’t get too attached to anyone because Lorn will go-oh! You like this one-bang! Dead! Oh you think this one’s safe-bang! Dead! I loved the enormous unpredictability of it all. Every time I wrongfully thought I had a handle on where we were heading, the story would do a 360 and go off in new directions. Chock full of broken characters caught in crazy situations digging themselves into deeper and deeper holes. Lorn mixes in a whole lot of wicked humor in the midst of all the despair, and I found myself laughing more than once at some pretty grim material. This was a heck of a page turner! I was already a fan after reading Fog Warning, and absolutely love Lorn’s style of throw everyone off the cliff-scorched earth brand of writing. Can’t wait to read more!
Read more
One person found this helpful
Report abuse

Amazon Customer
4.0 out of 5 stars No one is safe
Reviewed in the United States on 4 January 2018
Verified Purchase
I just finished The Sound of Broken Bones and all I can say is wow. When I first read the synopsis of the story I thought it was very interesting in the least. Then after I began to read and when the two women's life's collided together I just couldn't stop. The story is that of two peoples lifes affected by the same incident and is told by switching between both of their view points. At first I thought it would be hard for the story to flow with such an angle but I was wrong. The ending had me guessing and wanting more. It was a very pleasant read by horror standards and I would definitely recommend it.
Read more
One person found this helpful
Report abuse
See all reviews
Back to top
Get to Know Us
Make Money with Us
Let Us Help You
And don't forget:
© 1996-2021, Amazon.com, Inc. or its affiliates