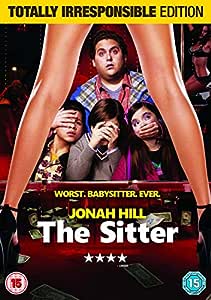 A night of babysitting for a college slacker takes an unexpected turn in this comedy from director David Gordon Green.Harrassed into babysitting the neighbours' kids by his mother, layabout student Noah (Jonah Hill) soon receives a call from his girlfriend with a promise of sex.In next to no time, frustrated Noah, with kids Slater (Max Records), Blithe (Landry Bender) and Rodrigo (Kevin Hernandez) in tow, is heading across town for his appointment with destiny.But rather than experiencing the night of passion Noah had hoped for, he finds himself trying to escape the clutches of a pair of low-life drug dealers hell-bent on revenge, who won't let anything or anyone, not even little kids, get in their way.
Technical Specs: * Languages(s): English
* Interactive Menu

Drea Jane
5.0 out of 5 stars Hilarious, “basic” movie for grown-ish kids and their family’s
20 June 2019 - Published on Amazon.com
Verified Purchase
Fun for movie night, not for young kids though. Plenty of swearing and drug use a little. Topics are adult yet through three younger kids eyes. Great subjects they touch on. Fun and sweet.
Read more
One person found this helpful

jodi A.
5.0 out of 5 stars Funny
20 August 2019 - Published on Amazon.com
Verified Purchase
Funny as he**. Great for any Jonah fan! A little silly but I really liked it!
Read more

Hey’all
5.0 out of 5 stars Hilarious
8 March 2019 - Published on Amazon.com
Verified Purchase
Hilarious 🤣, but not appropriate for kids under 18!! Sexual content &language : rated R for a reason.
Read more

Call me KID
4.0 out of 5 stars Might be a three star movie but I gave it four, If you like Jonah Hill you will enjoy his work in this film, GUARANTEED!!!
4 February 2015 - Published on Amazon.com
Verified Purchase
I just watched this on cable for the second time and when I saw the price of three bucks had to pick it up for my collection. It can be a little hard core at times so not sure if this is for children under sixteen, due to one violent violent fight scene, other than that it's pretty hunky dorey and will keep you amused.
Read more
2 people found this helpful

If you want something on in the background while you gorge on junk food, then consider this film.


Read more
2 people found this helpful
Go to Amazon.com to see all 313 reviews 3.8 out of 5 stars
Get FREE delivery with Amazon Prime
Prime members enjoy FREE Delivery and exclusive access to movies, TV shows, music, Kindle e-books, Twitch Prime, and more.
> Get Started
Back to top
Get to Know Us
Make Money with Us
Let Us Help You
And don't forget:
© 1996-2020, Amazon.com, Inc. or its affiliates