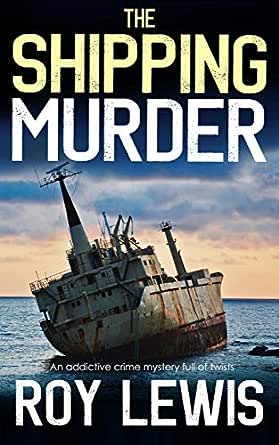 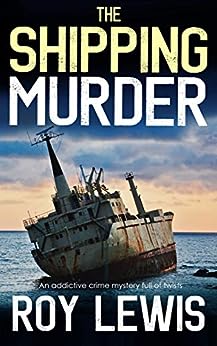 Discover Eric Ward, policeman turned lawyer. This beautifully told story, from a time before smart phones and DNA testing, will have you gripped from start to finish.

Please note this book was first published as A Premium on Death.

MURDER ON THE HIGH SEAS

Eric's wife, Anne, has followed the advice of handsome lawyer Mark Fenham and invested a small fortune in a merchant bank also involved in underwriting marine insurance. Now her company must pay out a vast insurance claim for Sea Dawn, a ship sunk in Spanish waters. Eric Ward smells fraud.

HIS WIFE COULD LOSE EVERYTHING

And then one by one, people connected to the Sea Dawn start to die. The murderous trail takes Ward to sunny Spain — where he comes face-to-face with his arch enemy.

WILL WARD UNCOVER THE TRUTH ABOUT THE SINKING OF THE SEA DAWN?

THE DETECTIVE
Eric Ward is forced to retire from the police when he discovers he suffers from glaucoma but qualifies as a solicitor (lawyer) and sets up his practice on the Quayside in Newcastle, where he deals with the seamier side of the law. When he marries a wealthy young woman she attempts to persuade him to settle in Northumberland and work with wealthier clients but he stubbornly refuses to give up his criminal practice in Newcastle. Although she draws him into the world of high finance he still insists on continuing at the Quayside — which causes tensions within his marriage, and leads to unintended consequences.

This fast-paced mystery will have you enthralled from the start. Set in England in the early 1980s, this is the sixth book to feature Eric Ward. More coming soon.

“Roy Lewis is a writer who believes in keeping his readers on their toes with plenty of twists and surprises. He writes well, too with an admirable sense of character and place.” Daily Telegraph

Peter the constant reader
TOP 50 REVIEWER
5.0 out of 5 stars Troubling waters
1 January 2020
Verified Purchase
Roy puts together a really good and well researched story and makes it thrilling. Add in his lovely if stormy relationship with his wife Anne it is a complete package.

Perhaps the necessary legal and corporate explaining makes this book a little weighty in places but is interesting. The action is fast and furious so the book moves along.

In this story which unfortunately is the end of the series we see a gradual loss of Eric's independence as he acts to protects his wife's money. The usually straight as a die Eric is forced to swim with the sharks of the corporate world. He swims well but we find the rules are very bent where money is involved.

wazza
4.0 out of 5 stars How corrupt marine insurance can be.
25 December 2019
Verified Purchase
Quite a detailed plot with a few twists. I managed to acquire additional useless information about nautical insurance complexities; but all things considered I found the story addictive.
Read more
Helpful
Comment Report abuse

Fiji
4.0 out of 5 stars Ship Masters Business
10 January 2020
Verified Purchase
Being a Master Mariner I read the book. The story was more about maritime law- but with ships and personnel in the background to keep it going.
Read more
Helpful
Comment Report abuse

C Stewart
3.0 out of 5 stars Who edited this??
5 December 2019 - Published on Amazon.com
Verified Purchase
Or rather did not edit this. Enjoyed the story - BUT can not believe the miserable errors! Names wrong (Farming instead of Channing), punctuation missing, multiple typos. DISTRACTING!
Read more
2 people found this helpful

El Toro Rojo
5.0 out of 5 stars The best of the series
30 December 2019 - Published on Amazon.com
Verified Purchase
While I enjoyed the other books in the series, I felt this was by far the best. All chicanery, all the time, and as another reviewer said, an excellent primer on maritime law. Plus some of it takes place in Spain and Spain is so awesome. Protagonist Ward is an uptight and humorless person but he gets the job done.
Read more

Kindle Customer
5.0 out of 5 stars Another great read
13 December 2019 - Published on Amazon.com
Verified Purchase
Thoroughly enjoyed this book. Twists and turns in the story. Pleased to see
The hero coming out on top in the end.

MLM
5.0 out of 5 stars An excellent read
29 December 2019 - Published on Amazon.com
A fascinating primer on marine insurance and a fun story. I really enjoy the Eric Ward character. Hope there will be another one. I
Read more
Go to Amazon.com to see all 4 reviews 4.4 out of 5 stars
Get FREE delivery with Amazon Prime
Prime members enjoy FREE Delivery and exclusive access to movies, TV shows, music, Kindle e-books, Twitch Prime, and more.
> Get Started
Back to top
Get to Know Us
Make Money with Us
Let Us Help You
And don't forget:
© 1996-2020, Amazon.com, Inc. or its affiliates