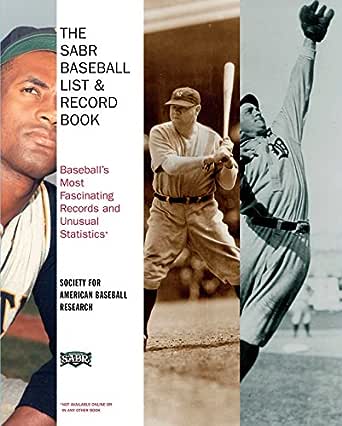 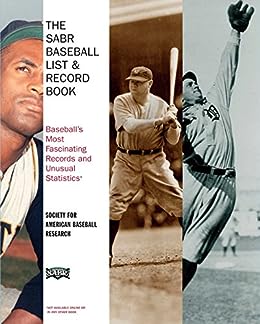 Steven Peterson
5.0 out of 5 stars Talk about cool statistics!
Reviewed in the United States on 5 October 2007
Verified Purchase
For those who are figure filberts and love strange statistics, this book is for you!

This is a book produced by the Society for American Baseball Research (SABR). This is, as the book says (page vii), "intended to fill what we in SABR feel is a void in the reference publications that fans and media depend upon." It is not intended to replace standard sources of statistics, The ESPN Baseball Encyclopedia. It provides other lists, not appearing in standard references. For instance, the Introduction remarks that some reference sources include records for most RBIs by a rookie, this volume lists "every rookie who batted in at least 100 runs."

The book covers the time frame 1876-2006. And comparing statistics across these periods is extraordinarily difficult!

Records are listed in numerical order from 001 to 740 (thus, there are 740 records examined). 001 is Most career games played (Pete Rose is # 1 with 3562); 740 is "Families with 3 or more brothers who played in the major leagues" (the Delahanty's are # 1 with 5 brothers playing in the bigs). By the way, both records are in the The Baseball Encyclopedia, if memory serves. But what records are included in between!

Some random picks: Worst fielding average by a first baseman since 1946. One player dominates with 3 of the 4 crummiest fielding averages. Any guess? Dr. Strangeglove--Dick Stuart (1961, 1963, 1964). Here's something exotic: Pinch-hit home run and one other home run in a game: This has happened 26 times (all with 1), the most recent being Jeff Salazar (Chicago White Sox) in 2006. What about most homers in a season without winning the home run title? Sammy Sosa, of course, with 66 in 1998.

Another intriguing hitting record: Most career RBIs without a 100 RBI season. Pete Rose ranks # 1 here. Others in the top 10 include Eddie Collins, Craig Biggio, Sam Rice, and Julio Franco. And how's this? Game-ending extra-inning home runs (16th inning and later)? The most recent is Ramon Martinez in 2006; the earliest was Charley ("Old Hoss") Radbourne, in 1886.

Anyhow, this book is a hoot for those who like offbeat statistics. Despite the book's claim, you will find some of these statistics elsewhere. But there are some interesting off-the-beaten-path stats.

Michael L. Slavin
5.0 out of 5 stars Excellent Compilation Of Many Obscure Records
Reviewed in the United States on 25 January 2010
Verified Purchase
This fine book has been edited into eight sections: Batting,Pitching,fielding and base running records,as well as rookie and miscellaneous records. Also included are a list index and player index. Just about any unusual record one might imagine is included. Many are broken down as totals and then by right,left and switch hit batters as well as right and left handed pitchers. Several interesting illustrations are most career grand slam home runs
Lou Gehrig (23),best career strikeout to home run ratio Joe DiMaggio (1.02)most career home runs without ever hitting 30 in a season Al Kaline(389),most career shutouts Walter Johnson(110),most career strikeout by a pitcher Nolan Ryan(5714)most consecutive strikeouts Tom Seaver (10-1970), most RBI's in a season by a rookie Ted Williams(145-1939)most consecutive wins in a season by a time N.Y. Giants(26-1916,most career steals of home Ty Cobb(54). This list covers seasons 1876-2006. Many of the records are broken down between pre and since 1893. And don't think just the top players of a category are listed. In many cases the best forty or fifty are shown. All told there are 740 record categories. Tremendous job that should be in every serious baseball library.
Read more
Helpful
Sending feedback...
Thank you for your feedback.
Sorry, we failed to record your vote. Please try again
Report abuse

Bruce R. Gilson
5.0 out of 5 stars Not the first baseball statistics book you should own, but a good supplement
Reviewed in the United States on 18 May 2007
Verified Purchase
This book contains a lot of statistics that you can't find anywhere else. It may be easy to find out who has, say, the largest number of doubles ever, but in this book you'll find the ranking of the highest ones, going down, for some statistics, to the top 50 or the top 100. You'll also find lists broken down by position, as well as by handedness (lefthanded, righthanded, or switch-hitting). There are also some odd statistics that you'll never find anywhere, such as managers by number of times ejected by an umpire from the game!

You do, of course, have to be a baseball fan, and the sort of baseball fan who relishes looking up all sorts of statistics, to enjoy this book. I am, so I really enjoyed digging into it.
Read more
8 people found this helpful
Helpful
Sending feedback...
Thank you for your feedback.
Sorry, we failed to record your vote. Please try again
Report abuse

James Pernikoff
4.0 out of 5 stars A valuable reference which needs updating
Reviewed in the United States on 29 July 2013
Verified Purchase
This is a truly useful desk reference to 740 lists about Major League Baseball, separated into chapters covering batting, pitching, fielding and base-running, along with a chapter on rookie records and one on "miscellaneous" records that include those for longevity and family ties.

There is an index of all the lists, and an important index listing every player and all of the lists that he appears on. Needless to say, the name that appears on the most lists is one Babe Ruth, which should come to no surprise to anybody.

There is no text following the introduction, and no illustrations. This is clearly not a book to be "read", but rather one that should be close at hand if any question about baseball records comes up.

The only real problem is that the book dates back to 2007 and is badly in need of an update. The current state of book publishing being what it is, I can see the next edition as being solely digital and having additional cross-referencing features that would be impractical in a hard-copy edition. What about it, SABR?
Read more
2 people found this helpful
Helpful
Sending feedback...
Thank you for your feedback.
Sorry, we failed to record your vote. Please try again
Report abuse

Richard L. Goldfarb
5.0 out of 5 stars Statistics you can learn from
Reviewed in the United States on 4 June 2007
Verified Purchase
Deep inside this book is a list of home-road disparities in home runs. One of the top seasons of all time, for the more unusual situation where the home park disfavored the hitter, was Alex Rodriguez in 2000, his only full season at Safeco Field. Here was a stat that, in ways the media never really covered, explained as much as anything why he fled for free agency. This book is filled with stats like this.

A great thing you learn, for instance, is that for some statistics, left handed pitchers or right handed batters have far less impressive stats than those who bat or pitch the other way. The career stats of left-handed closers, for instance, are pretty pathetic compared to right-handers.

And then there are the categories where a single individual just blows the competition away. Strikeouts per nine-innings in a season? Randy Johnson is simply God. Frank Thomas has some very impressive on-base stats. Great stuff.

My only complaint is that the fielding stats are pretty boring and useless. Errors are not a good measure of a fielder's prowess, and there are endless stats about errors and fielding percentage. Waste of good space, in my opinion.