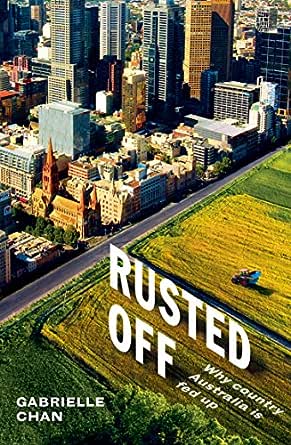 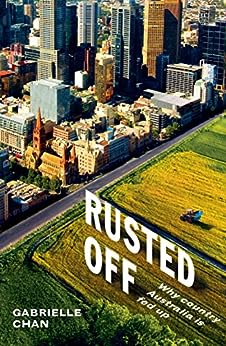 Rusted Off: Why country Australia is fed up Kindle Edition

SHORTLISTED FOR THE PRIME MINISTER'S LITERARY AWARD
A big story from a small town.

Telling the story of Australia as it is today, Gabrielle Chan has gone hyper-local. In Rusted Off, she looks to her own rural community’s main street for answers to the big questions driving voters. Why are we so fed up with politics? Why are formerly rusted-on country voters deserting major parties in greater numbers than their city cousins? Can ordinary people teach us more about the way forward for government?

In 1996 – the same year as Pauline Hanson entered parliament – Gabrielle, the city-born daughter of a Chinese migrant, moved to a sheep and wheat farm in country New South Wales. She provides a window into her community where she raised her children and reflects on its lessons for the Australian political story. It is a fresh take on the old rural narrative, informed by class and culture, belonging and broadband, committees and cake stalls, rural recession and reconciliation.

Along the way, Gabrielle recounts conversations with her fellow residents, people who have no lobby group in Canberra, so we can better understand lives rarely seen in political reporting. She describes communities that are forsaking the political process to move ahead of government. Though sometimes facing polar opposite political views to her own, Gabrielle learns the power of having a shared community at stake and in doing so, finds an alternative for modern political tribal warriors.
See all Product description

Amazon Customer
5.0 out of 5 stars A very interesting book
Reviewed in Australia on 27 December 2018
Format: Kindle EditionVerified Purchase
I thoroughly enjoyed this book. I found a lot to agree with.
It did give me a new look at country living. I have always preferred the city since coming to Australia as an English migrant in the late 60s.
Thank you I will look at the country I visit with new eyes.
Read more
Helpful
Comment Report abuse

Sarah
3.0 out of 5 stars Political
Reviewed in Australia on 5 July 2019
Format: Kindle EditionVerified Purchase
This would be easy reading for the politically passionate. I am not one of those people.
Read more
Helpful
Comment Report abuse

MTR
4.0 out of 5 stars Country Issues especially for the young...
Reviewed in Australia on 22 April 2019
Format: Kindle EditionVerified Purchase
A well written read which raised issues from a country perspective - issues most of we city people don’t take into account! Good to consider before the imminent election.
Read more
Helpful
Comment Report abuse
See all reviews from Australia

dmreview
5.0 out of 5 stars Good read and interesting parallels to UK, US
Reviewed in the United Kingdom on 3 January 2020
Format: Kindle EditionVerified Purchase
Read this a few months back on holiday in Australia when Brexit troubles were gripping my home country. Eye-opening parallels with London / rest of UK differences and Trump in US.
Written by a social-political journalist with a great style, which meant it is an excellent read but also a bit too 'Australia minutiae' focused for my interests, so I felt it could have been a bit more edited in places.
Read more
Helpful
Sending feedback...
Thank you for your feedback.
Sorry, we failed to record your vote. Please try again
Report abuse