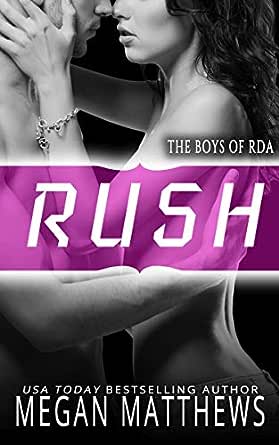 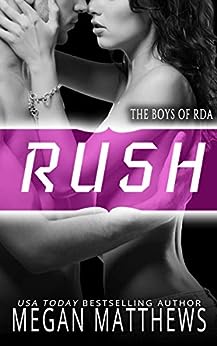 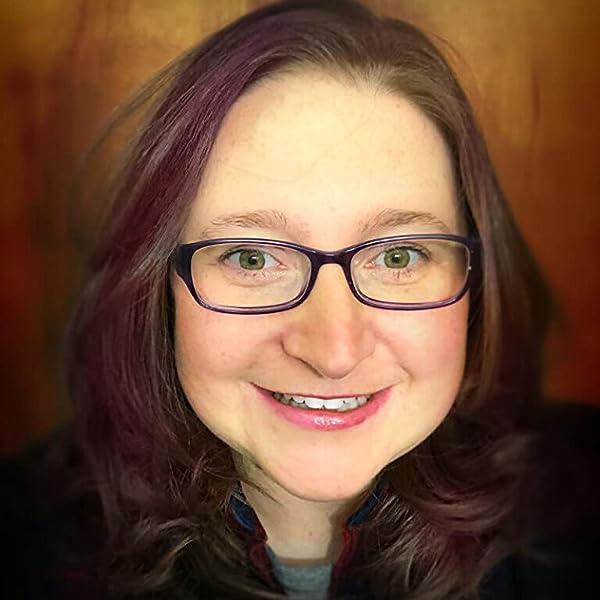 Jennadb
TOP 500 REVIEWER
4.0 out of 5 stars Great first book
Reviewed in Australia on 28 January 2019
Verified Purchase
Rush (The Boys of RDA Book 1) by Megan Matthews is sweet story that is light and fun and easy to read. The characters are well developed and made me laugh and they found a way in to my heart. I like Megan’s​ writing style which is inviting and interesting and makes it on hard to put the book down. It is a wonderful romance story that you can’t get enough of. I am loving the best friends and can’t wait to read their stories.

Aspen is upright and the next she isn’t, it seems her knight in shining armour has just saved her from a fate worse than death. Could he be the man of her dreams or is she reading too much into it? Will his past ruin what they could have in the future?

Finn saves the day and finds himself captivated by the girl he has just saved. He once thought he knew what love was but now he is not so sure, but will his past raise its ugly head and ruin all he has ever wanted.

This is the first book by this author and I am definitely looking forward to reading more in this series.

Jodie In Paradise
3.0 out of 5 stars Enjoyable
Reviewed in Australia on 7 June 2020
Verified Purchase
Just what you would expect.
Read more
Helpful
Report abuse

TCH
TOP 1000 REVIEWER
4.0 out of 5 stars Good start to a new series.
Reviewed in Australia on 3 September 2020
This is the 1st book in the The Boys of RDA series. This is the 1st time I have read this author and most certainly be the last.
Finn and Aspen meet by chance one day when she slipped in a puddle. Ever since then he always seems to be there just when Aspen needs him.
They have instant attraction. Will this lead to a HEA? You will have to read to find out.

Emski
4.0 out of 5 stars Hot Gamer Alert Incoming
Reviewed in Australia on 4 September 2016
First book in a new series and I liked it
Well this book started off nice. Hot nerd with black rimmed glasses meets sweet down to earth girl in the same apartment complex. Finn and Aspen stumble upon each other in the same apartment complex and start getting to know each other. Or so Aspen thinks. This book had a real comedy romantic Rom Com kinda feel to it that was easy to read hot in all the right places and a few little curveballs to throw you for a loop. Finn is hiding a part of himself from Aspen that for all good intent is not the way to start a relationship. Aspen bless her heart just believes the best in everything Finn is and just opens her heart to go along the ride. I read this book fast it was that easy to enjoy. With a great supporting cast of Friends and just one pesky Ex it kept me wondering and enjoying the search us bookworms are on for the happy ending. This was my first book of Megan's and I really look forward to reading the next in the series about Trey. Something tells me he will be a whole lot more alpha than Finn was.
Read more
Helpful
Report abuse

*Rush- a form of Game Play that relies on speed and surprise warfare to win.
Rush is the first book in the Boys of RDA Series by Megan Matthews. This is a fun, light-hearted and very erotic, romantic comedy.
Aspen Adams (Pen) is 23years old and fresh out of Graduate School with a MBA. Pen is sexy, strong- but a little naïve, adorably clumsy, loyal and loving. She has moved to San Francisco to start her new job and to be near her brother and his pregnant wife. Having lost their parents when they were both very young, he is the only family Aspen has.
After a pretty horrendous day at work- that started when she wakes up late, then forgets her lunch, spills her coffee, jams the copier; she is finally able to go home-only to emerge to torrential rain, with no umbrella. Could it get any worse?
When attempting to cross a busy road, Aspen slips in a puddle and nearly ends up as road kill- but for the strong arms that pluck her out of danger. Aspen looks up to find a tall, sexy guy- with shaggy brown hair, a cute dimple and sparkling green eyes framed by black rimmed glasses. He has that geeky, hipster vibe about him that intrigues her immediately. After he walks her to safety, she finds out that they live in the same building and are in fact next door neighbours. Damn… this doesn’t bode well for her rule of no relationships for at least a year, while she concentrates on developing her career.
Finn McRyan is 27 years old and works at RDA- Raven Design Arts, a Gaming Design and Development Company. He is sweet, kind, quirky, very smart- with a charming demeanour. He shy’s away from attention and isn’t interested in a relationship. So when he comes to the aid of the beautiful brunette klutz, he didn’t expect to be so drawn to her. He can’t help feeling protective of her, worrying about her welfare and making her happy. The chemistry between them is hot and sizzling. Unable to resist each another, things heat up pretty quickly.
Just when we think that Pen and Finn couldn’t be more perfect for one another, we discover that Finn may not be the nice guy we believe he is and he hasn’t been honest with Aspen- he has a massive secret. There are also miscommunications, crossed wires, a nasty ex, and things not being what they seem- do Aspen and Finn stand any chance of being together or will the truth destroy their relationship forever?
Megan Matthews has produced a refreshingly original, sweet, sexy, hot- modern romantic comedy- as her debut novel. Ms. Matthews has managed to make her characters feel real and relatable, making for an entertaining and enjoyable read. I also really appreciated the humour injected into the story. I was giggling and laughing a lot throughout the book and got the impression that Ms. Matthews has a wickedly funny sense of humour.
The story flows smoothly and quickly, that allowed me to read it in a day. Aspen and Finn get a HEA and as such, the book can be read as a standalone. At the end of this story, there is an excerpt of the next book in the series; which will be based on one of Finn’s friends- and from that snippet I am very much looking forward to reading Book two.
Thank-you Ms. Matthews.
Read more
One person found this helpful
Helpful
Report abuse
See all reviews

caralee loonat
4.0 out of 5 stars Embarrassment can lead to a great relationship...
Reviewed in the United Kingdom on 15 February 2019
Verified Purchase
Rush by Megan Matthews
4 Stars!!!!

This is the first book in the Boys of RDA series and I can say that it's definitely off to a good start! I really enjoyed this book and found it to be very refreshing. The author has definitely created characters that we can relate to. The book was just a page turner I couldn't put it down.

I really like how the author creates the drama around Finn and Aspen. The way that they meet and get together is actually quite realistic. I found that even though there was a bit of up and down for Finn and Aspen it just adds to the book and keeps the reader's interest. I really look forward to reading more from this author and this series in the future.
Read more
Report abuse

kerry baker
4.0 out of 5 stars A good start to a series
Reviewed in the United Kingdom on 29 January 2019
Verified Purchase
Rush by Megan Matthews is the first hook in the Boys of RDA series is. This book is a good start to a new series and is one I will be wanting to read more of.
I do have to say that at times I was a little disappointed with the writing style: it felt like there was something missing almost and I didn’t always connect with it.
However I did enjoy the overall story and I liked what the author did with it. The characters were likeable and easy to ease about. I could tell this was the start of a series and I am hopeful for what is to come out of it.
Read more
Report abuse

Mandy E
4.0 out of 5 stars Rush
Reviewed in the United Kingdom on 22 May 2018
Verified Purchase
A nice easy read and hopefully the start of a good series. The characters are likeable and relatable. The story isn’t complicated, it’s lighthearted and fun.
The geeky/nerdy Finn is not your typical leading man, but he’s very endearing in his vulnerability.
Aspen is the newcomer in town with the 5 year plan that goes out the window when she meets Finn. She’s had a troubled past but she’s finding her feet in San Fran.
Read more
One person found this helpful
Report abuse

michelle pitman
3.0 out of 5 stars Rush
Reviewed in the United Kingdom on 2 May 2018
Verified Purchase
A very good book, although I'd say it got a little bit convoluted in places I did enjoy reading it but I'm not 100% certain I would recommend it to other people.
Read more
Report abuse

clair
5.0 out of 5 stars Really good book
Reviewed in the United Kingdom on 4 October 2017
Verified Purchase
Really good book, took me a bit to get into but once I did I couldn’t put it down
Read more
Report abuse
See all reviews
Back to top
Get to Know Us
Make Money with Us
Let Us Help You
And don't forget:
© 1996-2021, Amazon.com, Inc. or its affiliates