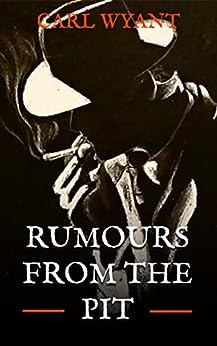 Rumours from the Pit: Tales from the underground Kindle Edition

This lively, colorful collection of stories is what happens. Laugh out loud, snort with indignation, scratch your head, and expand your brain.

Carl Wyant, a.k.a C L Razorback, rails and sparkles throughout this book, on subjects as diverse as droughts, daughters, doppelgangers, New Agers, and Presbyterians.

Subversive, original, and never dull, here is a roller-coaster ride through life according to Carl.

Carl left California in the early 70s for New Zealand, for reasons known only to himself, becoming a stranger in a strange land. In this book, he - and we - turn and face the strange.

"Cleopatra Baskerville looked stunning, as always. Her face, a neo gothic masterpiece from the hand of greasepaint genius, Henri LeCroix, was especially compelling. Moreover, it was so heavily applied that when we danced cheek-to-cheek an exact likeness of it was printed on me, leaving me the usual hardened thug on one side, and the belle of the superbunnies on the other. But I was unaware of this, and when we parted I was none the wiser."

A Case of Identity;

There are rumours afoot that the author of the Carl Wyant Report column is not really Carl Wyant, but rather, a notorious scandal broker named C L Razorback impersonating Mr Wyant.

Of course one’s first inclination is to dismiss the idea as mere tabloid sensationalism barely worthy of even fleeting consideration. And yet, strange as it may seem, there is a certain plausibility to this freakish notion.

To begin with, Wyant and Razorback look almost identical. Indeed, according to sober and reliable sources the only way to tell them apart is by their clothes, Wyant being notable for his austere black ties and button-down collars, whereas Razorback is rarely seen in anything other than garish Hawaiian shirts and threadbare surfer baggies.

"You were first assigned to the Queen of Diamonds, but I didn’t think she was a powerful enough angel for a star of your magnitude, so I went to the King of Clubs, who’s in charge of all this stuff, and stated my case.

But the King of Clubs hemmed and hawed and finally called in the Ace of Clubs. But they couldn’t decide either. So finally two more Kings and another Ace were called in, resulting in a full house."

To Swing's the Thing;

The piano player made a tentative run through the changes, paused, lit up a Lucky, and cruised into the mid-tempo swing of Easy Street.

Nearby, a shiny bald guy in a Hawaiian shirt took a sip of whisky, weighed up the beat, and when the chorus came around blew a wild descending string of notes on the clarinet.

A man built along the lines of a refrigerator stepped out of the shadows, put a trombone to his mouth and bellowed an advanced harmony note ...

"...one after another the pods began to spring from the vines, taking foot upon their tendrils and speeding off into the undergrowth. If we’d had our wits about us we might have doused the whole works in kerosene and burnt it to the ground; but we were lost in amazement, tea cups poised halfway to our mouths.

“Great Scott,” I said, lurching to my feet, “if those pods set seed and the generations that follow set seed, the numbers will increase at some horrific geometric rate. Smith,” I grew suddenly solemn, “this could lead to planetary takeover. Imagine,” I said loading the shotguns into a burlap sack and filling a fishing kreel with ammo, “a world controlled by runner beans”

Smith spoke up. “You’re an iconoclast,” he said philosophically, downing a Wild Turkey and lighting a Chesterfield....