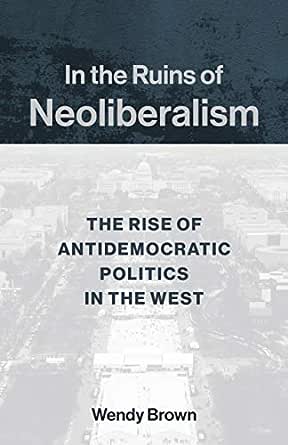 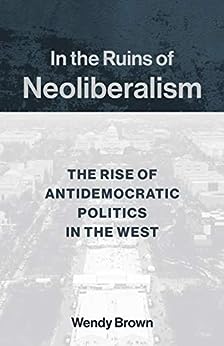 In the Ruins of Neoliberalism: The Rise of Antidemocratic Politics in the West (The Wellek Library Lectures) Kindle Edition

Brown attends to the perceived puzzles of neoliberalism that have baffled other analysts and solves them outright. In the Ruins of Neoliberalism offers a complete rethinking of our current political reality.

Across the West, hard-right leaders are surging to power on platforms of ethno-economic nationalism, Christianity, and traditional family values. Is this phenomenon the end of neoliberalism or its monstrous offspring?

In the Ruins of Neoliberalism casts the hard-right turn as animated by socioeconomically aggrieved white working- and middle-class populations but contoured by neoliberalism’s multipronged assault on democratic values. From its inception, neoliberalism flirted with authoritarian liberalism as it warred against robust democracy. It repelled social-justice claims through appeals to market freedom and morality. It sought to de-democratize the state, economy, and society and re-secure the patriarchal family. In key works of the founding neoliberal intellectuals, Wendy Brown traces the ambition to replace democratic orders with ones disciplined by markets and traditional morality and democratic states with technocratic ones.

Yet plutocracy, white supremacy, politicized mass affect, indifference to truth, and extreme social disinhibition were no part of the neoliberal vision. Brown theorizes their unintentional spurring by neoliberal reason, from its attack on the value of society and its fetish of individual freedom to its legitimation of inequality. Above all, she argues, neoliberalism’s intensification of nihilism coupled with its accidental wounding of white male supremacy generates an apocalyptic populism willing to destroy the world rather than endure a future in which this supremacy disappears.

Amazon Customer
5.0 out of 5 stars This is a very good book. Do yourself a favor and read it while taking notes.
16 January 2020 - Published on Amazon.com
I have the kindle version because I'm out of room, and it's nice to listen to as well as read. I'm old and the eyes tire. I will buy the paperback soon to write in the margins. I do that with "keepers" worthy of a place on my bookshelf, and this book is worthy. Somehow writing in the margins helps to stick stuff to the mind's sticking place; besides, C. Right Mills said to do so.
Read more

Anureet Sandhu
5.0 out of 5 stars great book
9 November 2019 - Published on Amazon.com
interesting author
Read more
One person found this helpful
Go to Amazon.com to see all 2 reviews 5.0 out of 5 stars
Get FREE delivery with Amazon Prime
Prime members enjoy FREE Delivery and exclusive access to movies, TV shows, music, Kindle e-books, Twitch Prime, and more.
> Get Started
Back to top
Get to Know Us
Make Money with Us
Let Us Help You
And don't forget:
© 1996-2020, Amazon.com, Inc. or its affiliates