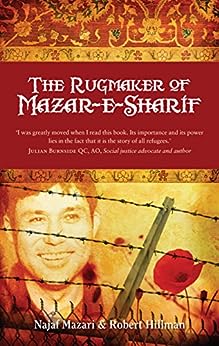 The Rugmaker of Mazar-e-Sharif Kindle Edition

‘An extraordinary account of an epic journey to freedom, told with great intelligence, humour, poetry and integrity. Even in his darkest hours of despair, Najaf clings to hope and his deep love of life and people.’ -- Arnold Zable, award-winning writer and human rights advocate --This text refers to an alternate kindle_edition edition.

Mazari fled upheaval in Afghanistan in 2001 and made his way to Australia, where he now lives with wife, Hakeema, and his daughter, Maria. He is a successful businessman with a shop in Melbourne’s antique precinct, selling traditional Afghan rugs. He is deeply involved in creating a better climate for asylum-seekers in Australia and in charity activities that provide medical and educational assistance to some of the poorest villages in Afghanistan. Each year, Najaf sponsors an Afghan Evening of traditional song, dance and cuisine that highlights the achievements of Afghans in Australia. Najaf’s first book (The Rug Maker) was on the VCE book list for 3 years, which then got extended for another 3 years. Najaf was nominated for Australian of the Year Awards 2014 and also has had a portrait entered into the Archibald by artist Phillip Howe.

Robert Hillman’s memoir, The Boy in the Green Suit, won the Australian National Biography Award for 2004. His 2007 biography, My Life as a Traitor, written with Zarah Ghahramani, appeared in numerous overseas editions. His first collaboration with Najaf Mazari, The Rugmaker of Mazar-e-Sharif has been a set text in many schools. He is also the author of Gurrumul: His Life and Music and the novels Joyful and The Bookshop of the Broken Hearted.

Humphrey Bower is a gifted and versatile actor. Since obtaining a BA (Hons) in English Language and Literature at Oxford University, he has worked extensively in theatre, television and audiobook narration. Humphrey won the prestigious Audie Award (US) for his performance of The Family Frying Pan by Bryce Courtenay, and was shortlisted for an Audie Award for his performances of Gould's Book of Fish by Richard Flanagan and Brother Fish by Bryce Courtenay. Humphrey's sensitive and intelligent readings are highly regarded and he is well-known for his capacity to perform a variety of accents. --This text refers to an alternate kindle_edition edition.

An Afghan refugee’s extraordinary journey – from his early life as a shepherd boy in the mountains of Northern Afghanistan, to his forced exile after being captured and tortured by the Taliban, to incarceration in an Australian detention centre … and finally, to freedom. --This text refers to an alternate kindle_edition edition.
Read more

MillaB
5.0 out of 5 stars Excellent … enlightening
Reviewed in Australia on 6 June 2018
Verified Purchase
This was an excellently written and informative account of the pure terror and extreme distress experienced by those who dwell under the control of evil power-hungry despots, and who manage to escape and seek asylum in peaceful, democratic countries in the desperate hope of re-starting a normal life for themselves and for their family. God forbid that when they land on the doorsteps of those countries that they're rejected, locked up, and traumatised all over again. Read this book, and have your eyes opened and heart softened.
Read more
Helpful
Report abuse

Maria Sawszak
5.0 out of 5 stars Afghani Asylum seeker
Reviewed in Australia on 18 August 2015
Verified Purchase
Great to read this book. This was the chosen study book for our Book Club group. It certainly gave us a better understanding of what the Afghani people were going through. The Hazari people certainly suffered greatly and it is good to know that so many refugees are in Australia for a better life.
Read more
Helpful
Report abuse

William Stewart
3.0 out of 5 stars Okay
Reviewed in Australia on 2 April 2019
Verified Purchase
A good book of you like this genre. The most enjoyable part is the reunion. It is inspiring to see how grateful he is to live in Australia.
Read more
Helpful
Report abuse

Amazon Customer
5.0 out of 5 stars Good book!
Reviewed in Australia on 18 October 2016
Verified Purchase
The book nicely captures the real situation in Afghanistan and it has a really nice story. I would recommend this to people who would love to read about inspirational people.
Read more
Helpful
Report abuse

Amazon Customer
5.0 out of 5 stars A refugees story
Reviewed in Australia on 8 November 2016
Najaf's story has helped me to better understand the strength and deep roots of Hazara culture and the contribution refugees can make to Australia. Although there is suffering in his story, he writes with a lightness of touch and a sense of our common humanity.
Read more
Helpful
Report abuse
See all reviews

W. A. Thurston
5.0 out of 5 stars A Mind Changing Book
Reviewed in the United States on 6 December 2012
Verified Purchase
The Rugmaker of Mazar-e-Sharif is a book that changed my perspective on the asylum seeker issue in Australia. Najaf Mazari was a man whose only wish in life was to live in peace and make rugs. But his wish was denied to him in his native land of Afghanistan. The Mujahedin fought the Russians, then they fought the Taliban, peace was a condition neither Mujahedin nor Taliban obtained.

Najaf found himself pursued by the Mujahedin and the Taliban to fight on their behalf in a conflict he did not believe in. Trying to elude these two warring parties was a life and death struggle for Najaf and his family. Wayward bombs and mortars were a constant fact of life and one misguided mortar destroyed Najaf's home. Caught by the Taliban and held hostage while those around him were tortured and killed, Najaf was lucky to be spared. It was a decisive moment for him, it prompted him to leave his young wife and six month old baby daughter and flee, through pakistan to Australia.

The cost of this journey was $3,500, and it contained many perils. Najaf had not heard of queue jumping, all he wanted was to be free to live in peace. All that awaited him in Afghanistan was death. So Najaf set off on a journey that took him halfway around the world, a journey where his life was in constant danger. When he arrived in Australia he found that he was incarcerated at Woomera Detention Centre, South Australia until his background and claims were verified.

Upon his release Najaf went to Melbourne and after a trying time, where he worked long hard hours, was able to set up his own business selling Afghan rugs. In 2006 his wife and daughter were allowed to join him in Australia. Then in 2007 Najaf obtained his Australian Citizenship.

Najaf's story made me realise that not all those who seek asylum in Australia are terrorists in disguise, economical refugees or criminals seeking to escape the law of their native land. Most asylum seekers are like Najaf, people fleeing in fear of their lives. All these people want is a chance to live full productive lives in harmony with their community, free from the constant shadow of death and destruction.

Those Australians who feel our country should turn away all boat people should read Najaf's book. Like me, I'm sure their views will be changed.
Read more
One person found this helpful
Report abuse

PearlWine
5.0 out of 5 stars A fantastic story of a gentle intelligent man's life from the simplicity of life in Afganistan to the complex life in Australia.
Reviewed in the United States on 7 June 2013
Verified Purchase
Najaf takes us on a ride through his childhood and adolescence, nothing like what we experience in Australia. The peaceful simplicity of life and relationships in Afghanistan are in stark contrast to the whirlwind of civil war constantly ravaging Najaf's country and people. Najaf's adult life in Australia is a great capture of a person from another country seeing Australia through different eyes. The scenarios layed out for us of Najaf's life in Australia show his heartache and struggle to get through the Australian government systems and start his true life in Australia. At times funny to us but i am sure from Najaf's inner being, the Australian culture, lifestyle and the way the country is run, becomes a miriad of strangeness, seemingly unneccessary red tape and yet above all this Najaf gives us an insight into what woman are like..... it appears women in Australia do think very similarly to those in Afghanistan, i thought this was a very refreshing and poignant insight. A fantastic book Najaf, thank you for sharing your story.
Read more
Report abuse

Leonie H
4.0 out of 5 stars Compelling reding into the life of an Afghan man.
Reviewed in the United States on 5 April 2017
Verified Purchase
Beautifully written. A sometimes sad, sometime happy, often frightening account, giving powerful insight into the reality of life for the people in Afghanistan. It enabled me to understand more of the reality of hardships that the people endure.
Read more
Report abuse

B. M. Tobias
5.0 out of 5 stars An entertaining and insightful story into life in Afganistan.
Reviewed in the United States on 20 July 2013
Verified Purchase
If you liked books by Khaled Hosseini you will enjoy this book. The writing is similar although the subject matter is a little different.
It is a hard to put down story which is maintained through to the end.
Read more
Report abuse

MJE
5.0 out of 5 stars Wonderful and moving book
Reviewed in the United States on 22 June 2016
Verified Purchase
A really moving and vivid story of this man's early life in Afghanistan and his flight from there, and ultimate settlement in Australia. All those who fear "boat people" should read this book.
Read more
Report abuse
See all reviews
Back to top
Get to Know Us
Make Money with Us
Let Us Help You
And don't forget:
© 1996-2021, Amazon.com, Inc. or its affiliates