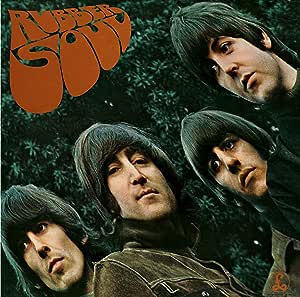 Secure transaction
Your transaction is secure
We work hard to protect your security and privacy. Our payment security system encrypts your information during transmission. We don’t share your credit card details with third-party sellers, and we don’t sell your information to others. Learn more
Details
Ships from
Amazon AU
Sold by
Amazon AU

Limited 180gm, audiophile vinyl LP pressing of this album from the Fab Four comes housed in replicated artwork, This vinyl pressing contains the 2009 digital remaster of the album, making it sound more vibrant and electrifying than ever before.

4.8 out of 5 stars
4.8 out of 5
3,409 global ratings
How are ratings calculated?
To calculate the overall star rating and percentage breakdown by star, we don’t use a simple average. Instead, our system considers things like how recent a review is and if the reviewer bought the item on Amazon. It also analyses reviews to verify trustworthiness.

SegaSonic91
5.0 out of 5 stars THIS is how reissues should be done!
Reviewed in Australia on 22 June 2018
Verified Purchase
The quality of the Beatles mono reissues are extraordinary. Peoole keep referring to these as "remastered", they were not. That is a word that gets thrown around as if it is something positive which is far from true. The stereo reissues in 2012 were "digitally remastered", that is not a good thing. Records should not have any digital manipulation and they certainly should not be made from CD masters.

EMI/APPLE CORP/UMe/whomever actually LISTENED to the fans and did not use the CD mono masters for this release! They went back to the precious, original master tapes and cut the records through an ALL ANALOGUE path! Using the notes from the original UK cutting engineers, these records are as close as can possibly get to a UK (or even Australian) first pressing of The Beatles' mono catalogue.

The quality of the actual pressing plant is where I have a huge problem. Two copies I received of Rubber Soul looked like old scratched up copies from the 60's. Amazingly, they made little noise, but visually it is just horrible and not what I expect from a band new, sealed item. That is something to be aware of. Every single mono record I have purchased, and the red, blue and even the new stereo Sgt Pepper, have been scratched, horribly off centre and even warped. They may have gotten the cutting right, but the quality of modern day record pressing plants sure as hell is not what it was in the 60's-80's.

Now if only they would do the right thing and release all analogue copies of Abbey Road and Let It Be. Actually, if only every single reissue was done from analogue master tapes with all analogue cutting paths, the world of vinyl reissues would be a far better place.
Read more
4 people found this helpful
Helpful
Report abuse

"mellowmarshman"
5.0 out of 5 stars Sounds good to me...
Reviewed in Australia on 5 January 2021
Verified Purchase
My first copy of this album on any format, so it's mostly all new to me. Surprised how much I enjoyed it considering it's 55 year old music, but then it is The Beatles after all.
I enjoyed the mix. I have nothing to compare it to, but other than for purists and major enthusiasts, I'd imagine most casual listeners will find it sounds great regardless of the source of the masters. It really did sound fresh, as though it had been recorded much more recently than 1965.
Clean pressing, good sound. Sleeve is a little sparse by modern standards, but then I expect it's meant to be a replica of the original.
Read more
Helpful
Report abuse

KL
3.0 out of 5 stars Version received doesn't match description
Reviewed in Australia on 7 August 2020
Verified Purchase
The one in the image shown is the Made in the EU pressing, Amazon sent me a US pressing. Disappointed as the vinyl they stock on the AU site are normally Made in the EU.
Read more
One person found this helpful
Helpful
Report abuse

M Pyke
3.0 out of 5 stars Came in time for Christmas
Reviewed in Australia on 29 December 2018
Verified Purchase
It's what daughter wanted
Read more
Helpful
Report abuse
See all reviews

SlimJ
5.0 out of 5 stars Rob Smith was very happy with the purchase
Reviewed in the United Kingdom on 6 September 2017
Verified Purchase
I didn't actually purchase this for myself, it was for a gentleman named Rob Smith who asked me to order it on his behalf as he was meant to be saving for an engagement ring for his fiance but still wants to feed his vinyl addiction at the same time without his future wife finding out.
He's assured me that he is very happy with the vinyl and would highly recommend it, he also states that it is worth putting off purchasing a ring for a little longer as the order of importance will always be, vinyl, scooter then fiance
Read more
31 people found this helpful
Report abuse

Major Tomfoolery
5.0 out of 5 stars Rubber Soul joint best Beatles album on immaculate sounding vinyl.
Reviewed in the United Kingdom on 7 June 2019
Verified Purchase
I am so pleased I decided to buy this on vinyl , as with Abbey road it stands head and shoulders over the cd version , the covers are cool and the joy of handling the vinyl never gets old , the actual sound of the tracks is amazing and you would be forgiven for thinking they had been recorded yesterday , Girl, Michelle, Norwegian wood and Nowhere man are standout tracks , if you just want a few classic albums on vinyl then this is a must buy .
Read more
8 people found this helpful
Report abuse

Antonio Robert
5.0 out of 5 stars Beatles go experimental (4.5*)
Reviewed in the United Kingdom on 20 April 2020
Verified Purchase
Rather fresh off the blockbusting films “Help!” and especially “A Hard Day’s Night” (and mostly their soundtracks), The Beatles did not rest on their laurels for long, offering “Rubber Soul” in 1965. It was a major leap forward, implementing more experimental ways into their music. Or, given the next two albums, this one was only hinting at what was to come. Also, there is nothing like a concept to be found here (unlike Revolver and Sgt. Pepper), the songs are more or less in random order. The album is interesting with its very varied guitar work - Norwegian Wood, I’m Looking Through You - songs reminding of riddles of a kind (The Word), interesting backup vocals (Nowhere Man, Girl). Although scoring fewer successes in the singles chart both in UK and US than its predecessors and followers, “Rubber Soul” nevertheless includes many great songs, including the beloved “Michelle” and one of the most covered Beatles tunes, “In My Life”.
Read more
Report abuse

Music Fanatic
5.0 out of 5 stars Great to hear in MONO on a decent hifi instead of those crappy record players we had
Reviewed in the United Kingdom on 15 August 2017
Verified Purchase
Another great album from the Beatle boys, the thicker vinyl is great and a true reproduction of the original album, though back then the vinyl was thinner of course. It certainly sounds much better to me in Mono and gives you that feeling of being back there, though I do have better equipment now to play on not a wooden record player or Ferguson radiogram which my parents owned later. I will play this when I want to close my eyes and go back in time.
Read more
5 people found this helpful
Report abuse

Mr. M. A. Reed
4.0 out of 5 stars On the cusp of greatness
Reviewed in the United Kingdom on 3 April 2015
Verified Purchase
"Rubber Soul" is album six, and here, The Beatles start to change - there's still a clutch of songs, but they all form a coherent whole, as opposed to being an assortment of random material recorded 'on the run' mid tour, as well as being one of the first that contains no cover versions. It may rate as Rolling Stone's fifth best album of all time (they're no kidding : it's good, but it's not that good). Lyrically the album is also much better than before : there's still the usual songs about love, and the somewhat threatening tone of "I'd rather see you dead than with another man", which sounds like a great pitch for a Beatles Horror Movie, but the songs are about wider things. Now, the band were exhausted by constant touring and work, and there's a clutch of better known songs - the ones that's it within the common knowledge of mankind - alongside perhaps less known songs, so much so, that there are often moments of "Oh! Of course! This one!". Nonetheless, Rubber Soul is the album where The Beatles started being who we universally recognise as The Beatles, and not as a band of hasty and frantic young men in the eye of a storm. Not the fifth best album ever, but certainly, the best Beatles release so far.
Read more
One person found this helpful
Report abuse
See all reviews
Back to top
Get to Know Us
Make Money with Us
Let Us Help You
And don't forget:
© 1996-2021, Amazon.com, Inc. or its affiliates