Royal Assassin (The Farseer Trilogy, Book 2) and over 1.5 million other books are available for Amazon Kindle . Learn more
Share <Embed> 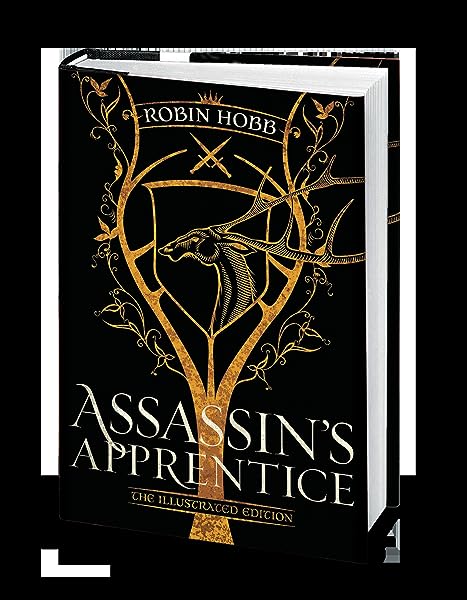 4.6 out of 5 stars 2,315 ratings
See all formats and editions Hide other formats and editions
Secure transaction
Returns Policy
Your transaction is secure
We work hard to protect your security and privacy. Our payment security system encrypts your information during transmission. We don’t share your credit card details with third-party sellers, and we don’t sell your information to others. Learn more
Read more Read less

Page 1 of 1 Start overPage 1 of 1
Previous page
Next page
Start reading Royal Assassin (The Farseer Trilogy, Book 2) on your Kindle in under a minute.

Robin Hobb is one of the world’s finest writers of epic fiction. She was born in California in 1952 but raised in Alaska. She raised her family, ran a smallholding, delivered post to her remote community, all at the same time as writing stories and novels. She succeeded on all fronts, raising four children and becoming an internationally best-selling writer. She lives in Tacoma, Washington State.

4.6 out of 5 stars
4.6 out of 5
2,315 global ratings
How are ratings calculated?
To calculate the overall star rating and percentage breakdown by star, we don’t use a simple average. Instead, our system considers things like how recent a review is and if the reviewer bought the item on Amazon. It also analyses reviews to verify trustworthiness.

Neil Daly
5.0 out of 5 stars Enthralling chapter of courage and deception
Reviewed in Australia on 24 March 2017
Verified Purchase
This book was well written. It is complex enough with its subplots but the excellent continuity allows the reader to follow easily. The tale has developed and the book difficult to put down. Good v evil, courage & revenge, disdain & dignity, love & loyalty - looking forward to development of these themes (with the ever presence of magic) in the next stanza.
Read more
One person found this helpful
Helpful
Report abuse

Will Edwards
5.0 out of 5 stars Great series
Reviewed in Australia on 6 December 2020
Verified Purchase
I love all the entire series of books, I also love the new illustrated editions as it puts some of the characters in perspective. Really great, and I would definitely recommend these.
Read more
Helpful
Report abuse

Amazon Customer
5.0 out of 5 stars Can’t put this book down!!
Reviewed in Australia on 25 January 2020
Verified Purchase
Fantastic series, I have been totally drawn into the world and am fly8ng through the series to find out what happens to the characters
Read more
Helpful
Report abuse

Jo Richardson
5.0 out of 5 stars A great read
Reviewed in Australia on 1 March 2020
Verified Purchase
Amazing book! Well written & hard to put down looking forward to the next book on the series.
Read more
Helpful
Report abuse

Danielle Drinwater
5.0 out of 5 stars Brilliantly written
Reviewed in Australia on 2 August 2016
Verified Purchase
I love this book even more than the first. Deeply written and left me wanting more. I can't wait to start the next book
Read more
Helpful
Report abuse

beverley gardam
5.0 out of 5 stars I just loved it , and I had never read any of her books before , I would highly recommend reading this trilogy .
Reviewed in Australia on 26 March 2015
Verified Purchase
robin hobb
Read more
Helpful
Report abuse

Amazon Customer
4.0 out of 5 stars Four Stars
Reviewed in Australia on 19 April 2015
Verified Purchase
Good story and well worth the read. the series has encoencouraged me to buy further books by this aurthor
Read more
Helpful
Report abuse

Joadka
5.0 out of 5 stars You won’t regret reading the Farseer trilogy.
Reviewed in the United Kingdom on 11 June 2020
Verified Purchase
Robin Hobb is a new author to me. I also have to say I’m not particularly into fantasy books either. I think I got the Farseer trilogy because is was on special offer. I read a lot of books on spec, hoping to hit the jackpot. Well, Fitz is definitely a hero to be reckoned with. commencing his history at six years old, when he is delivered to the Royal court, the illegitimate son of the heir to the throne. His existence causes the much admired married crown prince to abdicate, and he bears the shame of his conception. Fritz walks a thorny path, with little joy. Once I read book 1, I was hooked and have since devoured Fitz and the Fool and The Tawney Man. Fitz suffers from loneliness and trusts no one, but he does fall in love, but that’s not allowed either! He is shaped into a tool for the king to wield. Highly recommended.
Read more
4 people found this helpful
Report abuse

The Idle Woman
5.0 out of 5 stars A gritty, powerful and deeply moving book
Reviewed in the United Kingdom on 22 February 2017
Verified Purchase
Sometimes, at the close of a book, you feel almost physically drained. I had forgotten, quite forgotten, exactly how tough this series is: I can’t believe I was so young when I read it first (this was a reread). It’s harder and more brutal by far than the work of any other author I can remember reading, even more than George R.R. Martin, who is usually referenced as the example par excellence of an author who refuses to wrap his characters in cotton wool. The miraculous thing is that it all just binds you in to the story ever more tightly. There must be few mid-series books with such a raw ending, but at least the closing mood is one of mitigated triumph.

Despite the darker plot-threads that begin to unravel in this instalment, Hobb’s solid sense of place and character never fails to delight. The court at Buckkeep becomes an ever more absorbing bustle of plots, secrets and gossip and Fitz rapidly learns that he must be on his guard both within and without. As his relationships with those around him change, to echo the change in himself, he realises that adults are no better at making sense of their lives than he is, with his adolescent torments and confusions. And, enmeshed in the court hierarchy, these adults rarely have as clear and insightful an understanding of events as does Fitz, with his assassin’s eyes. He continues to follow Chade’s directions: to aid Verity, protect Kettricken and defend King Shrewd, but this becomes a crushing weight for such young shoulders to bear.

Hobb is extremely good at avoiding the suggestion that Fitz is the protagonist for anyone except her readers. All her characters have their own dreams and hopes and lives and you have a very firm sense that there are all sorts of other interesting stories unfurling at the sides of the novel that we never get to hear about. She drops tantalising hints about Chade’s past that I don’t think are ever fully fleshed out. Fitz moves through a world which is completely self-absorbed and really doesn’t take much notice of him; and that’s unusual in a genre where the heroes, like Rothfuss's Kvothe in

The Name of the Wind , are often extravagant, extrovert mavericks. Most of the people who do notice Fitz end up using him – perhaps kindly, perhaps with the best of intentions, perhaps with regret – as an instrument in their own plans. That’s even true (perhaps even more true) of the Fool. It all combines to create a stifling sense of claustrophobia, a world in which no one can really be trusted. Even those whom Fitz considers his protectors are willing to take desperate gambles in which he is the pawn that faces sacrifice.

If you can finish this book and not end up staring at the wall, feeling exhausted and wrung-out, then you’re stronger than I am. But this is part of the contract this series makes with you. It demands a particularly intense engagement from its readers and in return it sweeps us into one of the most addictive and absorbing fantasy worlds I know.

V E C Nicholas
5.0 out of 5 stars Another excellent read
Reviewed in the United Kingdom on 30 January 2020
Verified Purchase
I really enjoyed this book, although there were bits where it was quite chewy to read - having torn through the first book in the trilogy in a day, this second book took me several weeks to work through. However, the story IS excellent. There is so much intrigue and plot going on I could scarcely keep up or predict what would happen next!!!
Read more
2 people found this helpful
Report abuse

Frank A
3.0 out of 5 stars Entertaining, but in need of an edit
Reviewed in the United Kingdom on 27 January 2018
Verified Purchase
The first book was too short: the last arc wrapped too quick and the ending feeling too abrupt. And yet, because of this, the book felt lean. No chapter was wasted, and every paragraph counted. In constrast, the second book feels it could've done better with a heavier handed edit. At 600 pages, one would be delighted if not for the fact that it carries itself in a slower pace and the scope of the events is narrower. Somehow a book almost half the length had more action and more of the wonderful setting Hobb created.

More unfortunate than that, this book focuses more heavily on the romance from the get go. If all the scenes from Molly were cut out, I believe the book would have still carried out the same way, same gravitas, and same stakes.

I have purchased the sequel, but I am already bracing for more pointless, forced romance.
Read more
One person found this helpful
Report abuse

M. King
1.0 out of 5 stars Inventive but.....
Reviewed in the United Kingdom on 28 February 2018
Verified Purchase
There’s a very decent novel and in here with some inventive ideas.

Unfortunately it’s spread over 3 books and the repetition and the amount of dross needed to pad out those 3 books is a killer.

Book 2 has a load of guff about befriending a wolf cub (needed for a major plot point but boy does it get tiresome)..then the rubbish on /off Molly romance and then everybody blithely ignoring the elephant in the room about what’s wrong with the King.

Lost the will to live reading this tiresome book.
Read more
One person found this helpful
Report abuse
See all reviews
Get FREE delivery with Amazon Prime
Prime members enjoy FREE Delivery and exclusive access to movies, TV shows, music, Kindle e-books, Twitch Prime, and more.
> Get Started
Back to top
Get to Know Us
Make Money with Us
Let Us Help You
And don't forget:
© 1996-2021, Amazon.com, Inc. or its affiliates