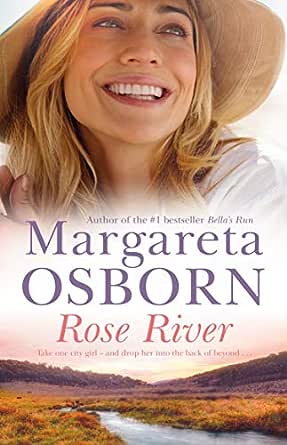 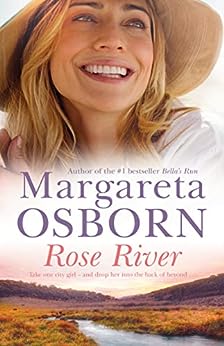 Margareta Osborn is a fifth-generation farmer who has lived and worked on the land all her life. She also writes about it in the Gippsland Country Life magazine. Home is the beautiful Macalister Valley of East Gippsland where, with her husband and three children, she spends many hours in the mountains in which her novels are set.

She is the author of four bestselling novels, Bella's Run, Hope's Road, Mountain Ash and Rose River (coming April 2015), and the no.1 bestselling ebook A Bush Christmas. --This text refers to an alternate kindle_edition edition.

Amazon Customer
5.0 out of 5 stars Love it
Reviewed in Australia on 14 November 2016
Verified Purchase
I love this book, but I love all of Margaritas books, her writing is so easy to read and her stories suck me in hook line & sinker. The fact I grew up in the area she writes about, and my love for that area helps me enjoy them even more. I can see a lot of me in her stories the emotion and feelings make me happy. Once I start I can't stop. Love your work don't ever give up xo
Read more
Helpful
Comment Report abuse

Kiara Westbury
5.0 out of 5 stars Loved it!!
Reviewed in Australia on 7 April 2015
Verified Purchase
Could not put this down! Thoroughly enjoyed it! Country romance at its best! Could not possibly recommend it any more
Read more
Helpful
Comment Report abuse

ktu35114
5.0 out of 5 stars ABSOLUTELY AMAZING - laugh out loud fun
Reviewed in Australia on 3 March 2015
I have heard a lot of fabulous things about this wonderful Aussie author, Margaret Osborn and was excited to read Rose River. I lived in Melbourne for a few years and Rose River was set not far from there. Ms Osborn has such an extraordinary writing style that I was addicted from the get go. The characters were fun and the overall story was so entertaining that everybody needs to read this book.

Jaime Hanrahan is twenty-six and currently unemployed. She was retrenched as a marketing executive and with Christmas approaching, she is looking for somewhere to escape the festive season. Her manicurist mentioned something about house-sitting in the country while the owner travelled.

With no six figure salary, no South Bank flat, no car, no iPad, no iPhone, Jaime was without technology and without independence.

Travelling to Polly’s Plains House, Jaime is in a bit of a pickle. Her bus doesn’t go up the mountain and unless she wants to wait until Wednesday for the next truck, Jaime has to get behind the muscle bound man on his motorbike. She calls him Marbleman for his icy exterior.

Marbleman gave her two minutes to pack some things to fit on the bike while the rest of her belongings would be delivered Wednesday. It appears Marbleman has a history with posh city chics and he seems to be taking his intolerance out on her.

Once inside the mansion in the country, Jaime was greeted with a note from the stockman, who obviously thought Jaime was a bloke. He was expecting Jaime to help with the cattle the next morning bright and early.

Well the next morning she wanted to prove her worth and went to the cattle yards to help, but what she found was Marbleman. Stirling McEvoy was just as shocked as she was. With determination and stubbornness, Jaime quickly learned to get up close and personal with the Steers.

When her belongings arrived at the General Store, Jaime heads off to collect them. The owner of the store, Ryan, asks Jaime on a date, but with a shadow coming over her and a deep voice speaking before she could respond, she found Marbleman dressed in all his leather glory. She was stunned by how exquisite he looked, frozen in place Jaime was busted for ogling, she came up with some excuse for checking him out. Making up a story about his boots, she wiggles her pretty sparkly toes at the men and they freeze mesmerised by her legs and sparkles. Marbleman tells Ryan that she has to help him with the rabbits, since she is supposed to be his hired help, so no date.

Jaime was falling in love with the countryside, Polly’s Plains was breathtaking. She was finding herself drawn to Marbleman, they have electricity that cannot be denied. He calls her Princess, which she hates and Jaime gets pressured into the Christmas festivities for the community.

Laugh along with Jaime as she fuddles her way through her weeks of housesitting a mansion in the country, falling in love with the community as well as the countryside and her interactions with Marbleman. See what antics come about when Stirling’s past catches up with him and a stepbrother who thinks Jaime belongs to him. Rose River was such a laugh out loud read, but had intense emotion from Jaime that I was crying with heartache too. This is definitely a must read for all romance readers after humour and fun.

Marcia@Book Muster Down Under
4.0 out of 5 stars A Fresh, Upbeat and Light-Hearted Romance
Reviewed in Australia on 3 August 2015
Jaime Hanrahan, high-falutin’ designer label queen and ex-PR executive finds herself in some memorable and laugh-out-loud moments after she decides to take on a house-sitting job in Burdekin’s Gap – rather that than spend Christmas with her gainfully employed friends whilst still trying to come to terms with the death of her father.

Only problem is, she didn’t realise how remote it would turn out to be!

When Stirling McEvoy discovers that Jaime is in fact the new farmhand, he is not impressed. This, of course, all begins to change when Jaime shows persistence and determination, even venturing to participate (sometimes not through any choice of her own) in the community’s activities.

However, as is usual in these stories, nothing is smooth sailing and these two characters soon find themselves having to overcome a number of hurdles before they get their happily ever after, including the re-appearance of Tiffany, Stirling’s awful ex-girlfriend and Marty, Jaime’s step-father’s nephew who just doesn’t know how to take “no” for an answer.

This novel was, for me, somewhat of a comedy of errors as Jaime finds herself in some humorous (and embarrassing) situations including being almost over-run when helping Stirling with the cattle, finding herself taking part in some nude cricket, being bucked right off a horse and trying to trick the goats (and the sheep who thinks it’s a goat) as well as the dogs out of the kitchen after they display some “naughty” behavior.

Even though I would have loved Margareta to included Stirling’s viewpoint, which would have just rounded him off that much more, this is a fresh, upbeat and light-hearted romance from our very own Voice of the Bush which I wouldn’t hesitate to recommend.
Read more
Helpful
Comment Report abuse
See all reviews

sue
5.0 out of 5 stars Brilliant read
Reviewed in the United Kingdom on 28 July 2015
Verified Purchase
I have loved all the books written by Margareta Osborn. I had trouble putting the books down as I wanted to know how it was going to end. Would definitely recommend this book along side her others.
Read more
Report abuse

KH
5.0 out of 5 stars Highy recommend it!
Reviewed in Germany on 15 December 2015
Verified Purchase
Loved it!
Romance, rural life and a wonderful love story that never gets boring.
Has its twists and turns from funny to sad to steamy to landscape-dreaming... And all characters are just wonderful written!
Will check out more books from this author.
Read more
Report abuse

Lynda
3.0 out of 5 stars Three Stars
Reviewed in the United States on 26 May 2016
Verified Purchase
Enjoyed the book but a bit far fetched in the end
Read more
Report abuse

LIzzie M
5.0 out of 5 stars Rose River ...a gem!
Reviewed in the United States on 14 March 2015
Verified Purchase
Beautifully done... dynamics kept me enthralled to the end. I could almost smell the eucalypts of the Australian bush as Margareta weaved her magic.
Read more
Report abuse
See all reviews
Get FREE delivery with Amazon Prime
Prime members enjoy FREE Delivery and exclusive access to movies, TV shows, music, Kindle e-books, Twitch Prime, and more.
> Get Started
Back to top
Get to Know Us
Make Money with Us
Let Us Help You
And don't forget:
© 1996-2020, Amazon.com, Inc. or its affiliates