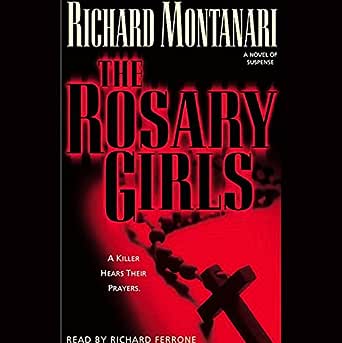 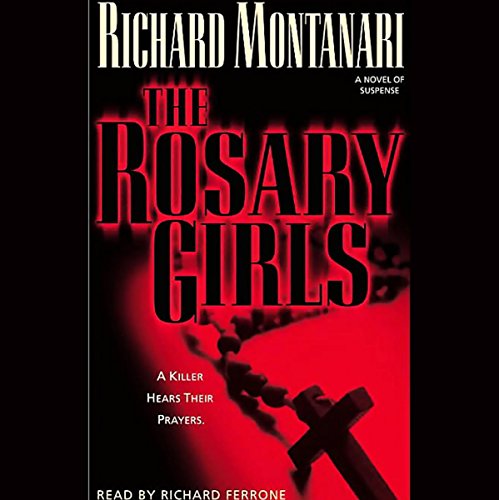 The Rosary Girls: A Novel of Suspense

4.5 out of 5 stars
4.5 out of 5
180 global ratings
How are ratings calculated?
To calculate the overall star rating and percentage breakdown by star, we don’t use a simple average. Instead, our system considers things like how recent a review is and if the reviewer bought the item on Amazon. It also analyses reviews to verify trustworthiness.

SandyJ21
5.0 out of 5 stars and committing an abomination upon their otherwise perfect bodies. These girls all have one thing in ...
Reviewed in Australia on 1 September 2014
Verified Purchase
Kevin Byrne is a veteran cop who he’s been living on the edge for far too long. His marriage failing, his former partner wasting away in a hospital, and his heart lost to its own mad fury, Byrne is breaking every rule in the book.

Now, he has been given a rookie partner, the daughter of a famous Philly cop. Jessica Balzano doesn’t need Byrne’s kind of help, but they need each other desperately. Because they’ve just caught the case of a lifetime. Someone is killing devout young women, bolting their hands together in prayer, and committing an abomination upon their otherwise perfect bodies.
These girls all have one thing in common and until Byrne and Balzano discover what this is, they have no chance of catching the killer or preventing him from striking again.

This is a book that is as compelling as it is horrifying and one i simply could not put down.

Mr. John L. Walmsley
5.0 out of 5 stars Scared
Reviewed in Australia on 22 December 2015
Verified Purchase
Just when you thought a book could not have got any better,you have come up with another belter,I will have to go through the whole list.
Read more
Helpful
Comment Report abuse
See all reviews

Helennnlouise18
4.0 out of 5 stars Reviewed for A Drop of Romeo
Reviewed in the United Kingdom on 9 June 2017
Verified Purchase
“The Rosary Girls” by Richard Montanari sees a new partnership is formed in rookie detective, Jessica Balzano, and veteran detective, Kevin Byrne, due to his previous partner being laid up in hospital post heart attack. Instead of being slowly eased into her new role as a homicide detective, Balzano's first body is that of a catholic schoolgirl whose hands have been bolted together in a gesture of prayer and she's clutching onto a set of rosary beads. Byrne is unsure if Balzano, the daughter of a famous philadelphia cop, will approve of his approach but together they must work together to catch the serial killer preying on Philadelphia's catholic schoolgirls...

This particular crime formula of a veteran detective that lives on the edge while breaking rules and making enemies along the way being partnered with a fresh faced rookie detective is a cliché that has been done a hundredfold. However, Montanari's shows us how it should be written in “The Rosary Girls” due to giving it a new lease of life and really bringing his characters to life with background stories including journalists out for blood, their family lives and just their every day interactions with each other. Byrne hints towards having a 'psychic' ability where he can sense what happened at a crime scene if he gets a good look at it. If handled incorrectly, this could have caused the book to crash due to readers not seeing it as completely realistic but Montanari handles it like a professional and I found myself curious as to what Byrne could see also.

When it comes to religious murders, sometimes you can be treading into risky territories but Montanari did his research and managed to write a perfect case as well as completely surprise the reader at the end when the killer and motive was revealed. The research in to police procedure was flawless and his writing makes you feel like a third detective on this new crime solving team.

With a gritty, fast-paced and intricate storylines, “The Rosary Girls” was a novel that had me hooked from the first word to the very last and I can't wait to join Byrne and Balzano on their next case.

Bottomless Hole
5.0 out of 5 stars 'There are things you need to know about these girls.'
Reviewed in the United Kingdom on 28 December 2014
Verified Purchase
I recently changed my own criteria regarding how many stars I give to a book in order that five stars would only be given to those that are truly outstanding and could make my top twenty. Therefore, I expected it to be some time before an award of five stars would be given again. How wrong I was. Rosary Girls is one of the best detective stories I have ever read - right up there with the outstanding works of Chris Carter

Rosary Girls tells the story of a serial-killer in Philadelphia who is targeting young Catholic girls for horrific deaths. The crimes are being investigated by the newly formed partnership team of Kevin Byrne and Jessica Balzano. Each character has his and her own past which is being slowly drip-fed to us and they find they work together extremely well from their first meeting. This is a refreshing change from the cliched strained relationships that authors often create where one partner replaces another. They both go about their work in a realistic way with a good team behind them. It is also refreshing that there isn't an uptight boss behind them with the intelligence of a goldfish and who is trying to take any glory for himself. In short, this is a very realistic story that leaves any sensationalism to the actions of the villain.

The theme of Christ's passion and the 'Five Sorrowful Mysteries also make for a truly powerful read and the methodology of the 'doer' is quite disturbing yet absorbing.

There are five more stories so far in this series and I cannot wait to read them.
Read more
6 people found this helpful
Report abuse

waycat
5.0 out of 5 stars A brilliant opening to this series
Reviewed in the United Kingdom on 30 November 2016
Verified Purchase
I stumbled upon book 7 in this series at my local library. Not realising it was part of a series, I read it anyway and thought how great it was - pacy, cleverly written, punchy, full of the twists and turns that make a good thriller, and also some touching moments to contrast perfectly.

When I discovered it was book 7 in a series of 9 I thought I simply had to read the whole series.

And so it was that I treated myself to all 9 books, and having read this first one I am so glad I splashed out on the whole series.

It is good to read about Byrne and Balzano in their first days as partners, and now I am really relishing the thought that I have 8 more books to get stuck into.

Highly recommended for anyone who likes a good roller coaster thriller.
Read more
One person found this helpful
Report abuse

SM 250
4.0 out of 5 stars Not a bad read
Reviewed in the United Kingdom on 18 July 2018
Verified Purchase
This book was a reasonable read. I did struggle to begin with and it took me a while to be gripped. I would have given three stars but the last quarter of the book saved it for me and I read that section in a day.

These books have been compared to Chris Carter's but for me this wasn't in the same league. His are much faster paced and I found the beginning of this book quite hard going.

However all being said I will probably at some point give the second book a go to see whether it grips me more quickly. Not a bad read, but for me, not one of the best.
Read more
Report abuse

Readaholic
3.0 out of 5 stars NOT THE BEST
Reviewed in the United Kingdom on 23 March 2018
Verified Purchase
After reading numerous reviews about this book I though this is going to be brilliant. I was so very disappointed, Byrne and Jess are great characters and compliment each other but it just didn’t grab me. I usually finish a book within two days but this one took a week mainly because it just didn’t have a hold on me. The ending was quite reasonable but I won’t be reading the next in the series.
Read more
Report abuse
See all reviews
Get FREE delivery with Amazon Prime
Prime members enjoy FREE Delivery and exclusive access to movies, TV shows, music, Kindle e-books, Twitch Prime, and more.
> Get Started
Back to top
Get to Know Us
Make Money with Us
Let Us Help You
And don't forget:
© 1996-2020, Amazon.com, Inc. or its affiliates