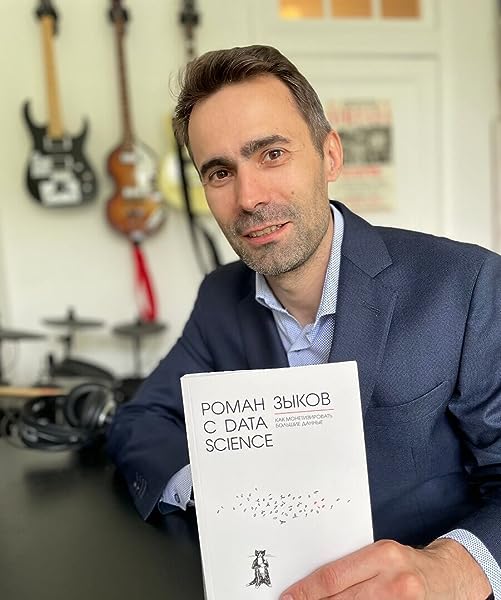 Roman's Data Science: How to monetize your data Paperback – 9 September 2021

An introduction to the field of data analysis written in jargon-free language that is not bogged down by programming code and mathematical formulas. It covers the most essential topics in the fields of data science, machine learning and business intelligence that you are likely to come across on a regular basis.

The main goal is to help readers get the most out of their data, make business decisions and create information products – all without paying over the odds.

In a career spanning over 20 years, the author has worked as a junior data analyst, headed up the analytics division of an $10-billion company and co-founded a Recommender Systems startup. The text was edited by a professional journalist. It contains QR codes and links with links you can follow if you want a deeper understanding of the topics covered.

- In Russia, the book was sold out in three weeks.

- The book is based on the author’s personal experience – it is not a boring textbook!

- It provides a complete Data Science picture without coding and math.

Those who are new to data science will learn exactly what the business needs in this area are, as well as different approaches to data analysis and an effective way to master machine learning.

Startups will learn how to get their data science divisions up and running quickly. They will also be introduced to three approaches to analyzing A/B tests.

Managers will learn about task management, money efficiency and the hypothesis pipeline in data science.

Start reading Roman's Data Science: How to monetize your data on your Kindle in under a minute.

- 20 years of experience in data analysis, holds a master’s degree in applied mathematics and physics.

- Created analytics from scratch for the online retailer Ozon.ru (worth $10 billion Nasdaq).

Roman Zykov was born in 1981. After completing his undergraduate studies in 2004, Roman went on to earn a master’s in Applied Physics and Mathematics at the Moscow Institute of Physics and Technology (MIPT).

Roman started his career in data science in 2002 as a technical consultant at StatSoft– the U.S. developer of the STATISTICA statistical data analysis software. In 2004, he was hired as head of the analytical department of the Ozon.ru online store, where he created analytical systems from scratch, including web analytics, database analytics and management reporting, while also contributing to the recommendation system.

In 2009, he advised on a number of projects for Fast Lane Ventures investment fund and the gaming industry.

In 2010, Roman was hired to lead to analytics department of the online retailer Wikimart.ru.

In late 2012, he co-founded RetailRocket, a marketing platform for online stores. The company is currently the undisputed market leader in Russia and successfully operates in Chile, the Netherlands, Spain and several other countries.

Roman ran the blog Analytics in Practice from 2007 where he evangelized data analysis as it applies to business problems in ecommerce. He has spoken at numerous industry conferences, including the Russian Internet Forum, iMetrics and Gec 2014 (with Arkady Volozh of Yandex), as well as at business conferences in Dublin and London, the U.S. Embassy (American Center in Moscow), and 10 About the Author Sberbank University. He has also published in PwC Technology Forecast, ToWave, Vedomosti and Sekret firmy.

In 2016, Roman has talked about on hypothesis testing at MIT in Boston (ACM RecSys).

Customer
5.0 out of 5 stars If you want to become a data scientist
Reviewed in Germany on 25 October 2021
Verified Purchase
It will be compelling reading for those who plan to change the field and enter data analysis in any capacity, from processing to visualization. You will find everything you need to make such a decision in this book, setting aside the aggressive marketing of online courses and bloggers. I'm sure that many will save a lot of effort and time searching and analyzing the whole picture, just learning everything they need firsthand. Thanks to the author!
Read more

Customer
5.0 out of 5 stars If you want to become a data scientist
Reviewed in Germany on 25 October 2021
It will be compelling reading for those who plan to change the field and enter data analysis in any capacity, from processing to visualization. You will find everything you need to make such a decision in this book, setting aside the aggressive marketing of online courses and bloggers. I'm sure that many will save a lot of effort and time searching and analyzing the whole picture, just learning everything they need firsthand. Thanks to the author!
Images in this review

Ivan Miniailenko
4.0 out of 5 stars The book is very enjoyable to read and easy to understand to a broad audience!
Reviewed in the United States on 29 September 2021
Verified Purchase
I'm not really a target audience and didn't learn much from this book. Nevertheless, it was quite helpful in that it allowed me to look through someone else's eyes at the problems I encounter at work. Usually you learn that from talking to colleagues or from articles, but this is a whole book. I did glean some interesting ideas from it.

The book really covers almost all aspects of analytics department in a company: what are the tasks, what tools are used, who and how works with it all, what to expect and how to grow.

Some things I would have filed a little differently, some I did not agree with, but in the whole book I did not come across some detached from reality things. It feels like the author has picked up more than one rake along the way from starting his career in analytics to writing this book.

The only thing I'd call a drawback of the book is the math chapter.
The whole book to that point assumes that the reader has no knowledge of statistics. And there's the "normal distribution", the "histogram", "the median is the value that divides the sample in half" and so on. Readers who're not in math won't understand it at all, I've checked. And then we also talk about the distance of percentiles from the median, without explaining what percentiles are. I would move the paragraph with the definition to the place before the first use of the term. The exponential distribution is also without any prior definition. In general, the chapter goes sharply into mathematics.

I would definitely recommend this book to executives who have not yet had experience with analytics beyond basic tools like spreadsheets in excel.

I would recommend this book to analysts who have had professional experience but don't yet really understand the role of analytics in business.

And I would recommend this book to people who already have some experience and understanding of how business works, but are just about to get into analytics.

Pros:
- The chapters of the book can be read independently of each other
- The material is served in small pieces - easy to read

Cons:
Without knowledge of the most basic concepts and definitions, it will be a little difficult
Read more
One person found this helpful
Report abuse

Amazon Customer
5.0 out of 5 stars Very practical for a tech product manager
Reviewed in the United States on 14 October 2021
Verified Purchase
I loved the book! its both theoretical and practical! as a PM in a tech company i found it very handy especially as nowadays i communicate a lot with data scientists and ML engineers!
Read more
One person found this helpful
Report abuse
See all reviews