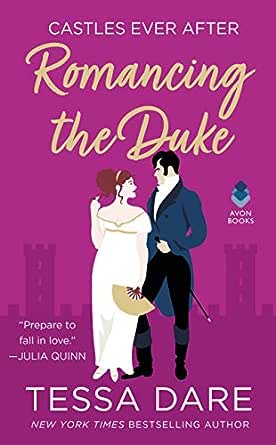 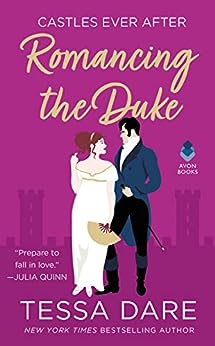 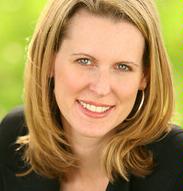 Romancing the Duke: Castles Ever After Kindle Edition

Tessa Dare's first instalment in the new Castles Ever After series, ROMANCING THE DUKE will have readers clearing their keeper shelf just to make room for this little gem! Jam- packed with hilarious banter, Dare's trademark humor is showcased in its full glory.--Fresh Fiction

This book is already in my top books for 2014. This new series of Tessa Dare's is off to an amazing start!--Smexy Books

I think this is a truly unique historical that will appeal to readers who aren't often historical fans.--Smart Bitches Trashy Books

Dare starts her new series with a unique storyline, a sweet, fun nod to literary fandom, and two main characters who are perfect for each other yet never would have met if they weren't each at a nadir in life's journey.--Kirkus Reviews (starred review)

Dare's lyrical writing and expert, intense character development make this a romance to be savored with the eager expectation of future series installments--Publishers Weekly (starred review)

Splendidly talented Dare creates cleverly written dialogue, exceptionally appealing characters, and an engaging plot that gives a wink toward Beauty and the Beast and a nod to fandom, all key components in this wickedly funny and soul-satisfyingly romantic novel, the perfect launch to Dare's new Castles Ever After series.--Booklist (starred review)

In the first in Tessa Dare's captivating Castles Ever After series, a mysterious fortress is the setting for an unlikely love . . .

As the daughter of a famed author, Isolde
Ophelia Goodnight grew up on tales of brave knights and fair maidens.
She never doubted romance would be in her future, too.  The storybooks
offered endless possibilities.

And as she grew older, Izzy crossed them off.  One by one by one.


Now Izzy's given up yearning for romance.
She'll settle for a roof over her head.  What fairy tales are left over
for an impoverished twenty-six year-old woman who's never even been
kissed?


This one.
See all Product description

NicShef❤️Reading
#1 REVIEWER
5.0 out of 5 stars Marvelous...
1 July 2018
Format: Kindle EditionVerified Purchase
This book is Tessa Dare in top form - I just loved it. Her prose is laugh out loud... and it really is a fairytale that you can lose yourself in for several hours of humour, semi-drama and sizzling romance...

Ransom is scarred and physically injured from a short-sword fight that occurred several months ago, but he is a handsome man in spite of the injuries.

Izzy is described as not a beauty, at least in her own eyes her super curly, untameable hair and her nose make her unattractive. They are forced together through a misunderstanding where she is bequeathed the property from her Godfather but Ransom says he’s never sold it... Izzy sticks her feet in and won’t leave and so fire, fun, craziness follows...

This has it all.. there are knights, a ghastly, ghostly Gostly Castle, a resident scarred and tortured Duke, handmaidens and a feisty, innocent young woman who refuses to be pushed around.

lisa
TOP 50 REVIEWER
5.0 out of 5 stars Castles, bats, fan-boys and a weasel
1 January 2016
Format: Kindle EditionVerified Purchase
This the most endearing book I have read because it's so funny, touching and believable. The hero is a blind man and the heroine is destitute yet it's just hilarious. Izzy's father is a famous author but his death leaves her penniless. Luckily her godfather leaves her an inheritance - a run down castle inhabited by an angry Duke. Ransom is bitter after losing his sight in a duel. He tries to get rid of Izzy but she is determined to stay at the castle.

One of best things about this book is the witty dialogue between Izzy and Ransom as they wrestle for the upper hand. As the story progresses their intriguing personal stories are revealed, layer by layer. Livening up the story is an uninvited entourage - fans of books written by Izzy's father, dressed in costumes and everything. Like real fans they are both fanatical and sweet. There is lots to like in this very enjoyable read. It's a six star novel.

Karen Talley
5.0 out of 5 stars 5+ Stars
19 May 2016 - Published on Amazon.com
Verified Purchase
I had been having a bad few days: washer quit, faucet leaking, and a sick cat. I decided to read for a while and try to regain my sanity. All I can say is "Thank you, Tessa Dare!" This book hooked me from the very beginning. A heroine who is not typical at all: plain (large nose and frizzy hair), practical, and willing to go toe to toe for what she thinks is rightfully hers. No shrinking violet here! The hero is handsome, scarred, and a recluse. Oh, and he is blind! When Izzie shows up to claim the decrepit old castle that the Duke is hiding in, sparks fly. With the moldering old castle, only one servant and a blind Duke, I was afraid that I was in for a Gothic tale of vengeful spirits and a secret child or two. Instead I found a charming (though highly improbable) tale that kept me laughing and reading long into the night. I still have to laugh when I think of the 'West Yorkshire Riding Knights of Moranglia.' If you are looking for a book that is perfect in every historical detail, then this may not be the book for you. However, if you like strong heroines, flawed but gorgeous heroes, and witty dialogue....this is it!

Warning: The heat level in this book is HOT and may offend some readers.

bookworm8619blog
5.0 out of 5 stars 5 wonderful stars :)
20 December 2019 - Published on Amazon.com
Format: Kindle EditionVerified Purchase
I was a huge fan of Tessa Dare’s Girl meets duke series and ever since I inhaled all available stories in it so far I started purchasing her other books… I managed to find a few of them, including this one, on sales here and there ;) and recently I decided it was finally time to give another one of her stories a try to see if I liked the books in that previous series or if her writing style just works for me… and I can very happily say that she’s quickly becoming one of my all time favourite authors… let me tell you why :)

Technically this is a historical romance but… is it accurate to the times when it takes place? not really… is it believable? also no… did any of that diminish my enjoyment of the story? absolutely not :) it was just the cutest, most adorable and hilarious novel ever… I loved every minute if it :) I don’t want to get into too many details, cause the synopsis is pretty vague, but it’s all about Izzy and Ransom… Izzy is the daughter of a famous writer who is now dead and Ransom is a scarred soldier who came back to his castle… and now Izzy shows up there because it’s apparently now her castle… to say that the situation is complex nd awkward would be an understatement ;) what comes next is a series of absolutely cute and funny events, with quite a few sinfully sexy scenes as well… and I loved it to pieces… like I mentioned, don’t go into this story expecting believable and reasonable things to happen… you won’t find them :) but if you need a book that will leave you with the biggest smile on your face and just bring you lots of joy and happiness then start it immediately :)

S. J. Cooper
5.0 out of 5 stars Another Great Novel From Tessa Dare!
13 February 2017 - Published on Amazon.com
Verified Purchase
You know how sometimes you find a book that you just are SO into that even continuing to binge your new favorite TV show pales in comparison? That was this book to me! It's been a long time since I found a book that has engaged me so much that I'd rather sit down and read instead of watching TV.

I discovered Tessa Dare when her first Spindle Cove novel went on sale on eBook for .99. I figured, hey it's only .99, I'll give it a try, and I FELL IN LOVE with Miss Dare's writing and storytelling! I immediately read all her other books that we available and she was added to the list of my "must buy" authors!

This story doesn't disappoint! My favorite thing about Tessa Dare's writing is the humor. I love it when the characters personal thoughts are written in a way that is realistic and yet the delivery is a totally hilarious one liner. This novel is filled with wonderful funny and humorous thoughts, situations and dialogue.

Another thing that I really liked was that the hero was able to be brooding and stern but still be tender and sweet. I hate it when the hero is what I like to call "an angry hero." When they are constantly getting upset at everything the heroine does and I feel like they always yelling and telling the heroine what to do (I find this happens a lot in historical romance novels) and then she decides that he's the only one for her and the rest of the novel is a quest for her to find his soft side. I hate that. Our hero, Ransom, in Romancing The Duke, has every reason to be a hard, angry, man. But yet, he still has a softness about him, which is why I could see the heroine falling in love with him. And when he finally accepted that softer side of himself, I loved him even more!

The heroine is a great woman too. I could absolutely see myself being friends with a woman like that in real life.

This is a great "Beauty and the Beast" type tale. It is a wonderful homage to today's nerd culture (cosplay especially!), which I found extra enjoyable and a great addition to the love story! If you love Tessa Dare, or historical romantic comedies, then you will love this book!

Ms.V
5.0 out of 5 stars Refreshing and original
24 January 2017 - Published on Amazon.com
Format: Kindle EditionVerified Purchase
I really enjoyed this book as the plot was unique for a change and not the typical cookie cutter romance of norm with nothing more than girl meets boy, fall in lust then love, have major silly predictable misunderstanding and then end up making up and living HEA.

The characters were charming and all well developed and even the "fantasy" parts of the book meshed in perfectly balancing out the story, enough for the reader to find it not entirely far fetched at all. The chemistry and honesty (no game playing/holding back) between the leads was seductive and erotic. It was so nice to see a women, an untouched and naive woman, embrace her desires openly without the typical "shame" as is the norm in regency romances. Equally refreshing to see the hero man up and be himself with no pretense, grow emotionally and embrace his growth and love for Izzy without the constant berating you see most hero's do in novels. I'm really looking forward to the rest of this series. :) well done Ms. Dare.
Read more
6 people found this helpful
Go to Amazon.com to see all 477 reviews 4.5 out of 5 stars
Get FREE delivery with Amazon Prime
Prime members enjoy FREE Delivery and exclusive access to movies, TV shows, music, Kindle e-books, Twitch Prime, and more.
> Get Started
Back to top
Get to Know Us
Make Money with Us
Let Us Help You
And don't forget:
© 1996-2020, Amazon.com, Inc. or its affiliates