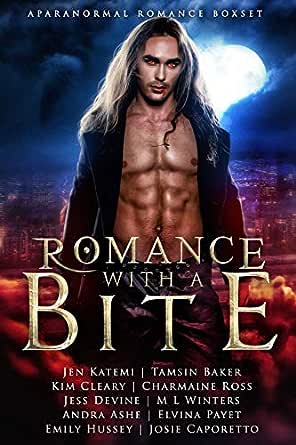 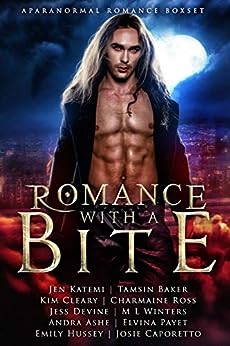 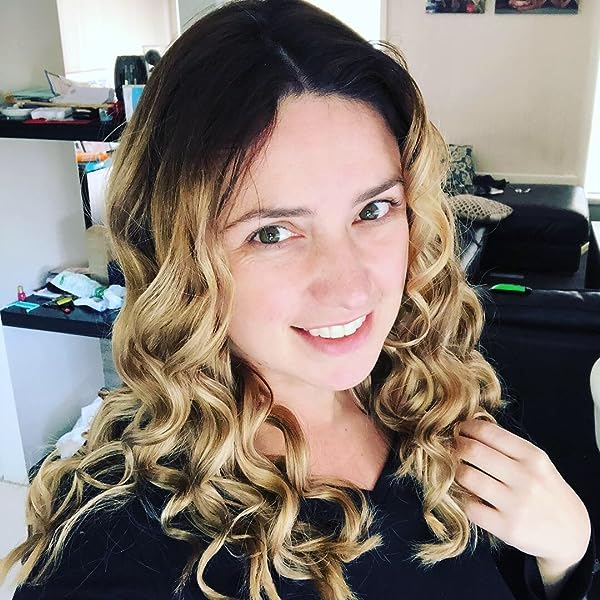 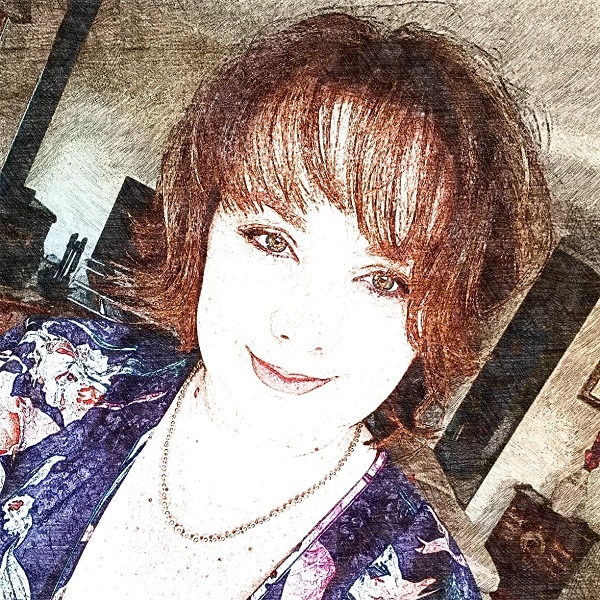 Romance with a Bite: A Paranormal Romance Box-set Kindle Edition

Romance with a Bite will capture the heart of anyone who loves the bite of a sexy vamp, the growl of an Alpha wolf, or the sensual mystery of a fae prince or princess.

If you adore paranormal romance with an edge, this LIMITED EDITION collection will satisfy your every craving.

Vampires, shapeshifters, witches and fae – mythical creatures abound in these ten steamy romances that will leave you shivering with delight.

ALL stories are BRAND NEW and EXCLUSIVE to the boxset.

Lynall
TOP 500 REVIEWER
5.0 out of 5 stars Lots of good stories
3 February 2020
Format: Kindle EditionVerified Purchase
Excellent anthology
This is a great anthology, the stories are all themed with ‘bite’ and not surprisingly, most have vampires as the basis, but other interesting characters are also included. I really liked Phoenix rising, with a dragon and a Phoenix as the main characters. I stayed up late to see how it ended. Taken by the vampires is a bit bleak, but had a happy ending. Banshee cry was interesting with an intriguing story of a banshee finding love. Biting temptation is a mystery with a small town teacher finding out she is more than she seems after inheriting her Aunts house, and the town has secrets. All of these stories are original and the anthology is well worth a look. It has definitely given me more authors to follow.

Anne Dwyer
TOP 500 REVIEWER
5.0 out of 5 stars Great collection!
1 February 2020
Format: Kindle Edition
Banshee Cry
Aleah is a hybrid - part banshee, and part human. Her warning banshee cry is defective, and she is unable to warn anyone about their impending death. Vampires are responsible for her father's death, and she hates them with a passion - until she meets Luc, a vampire who works for the authorities keeping rogue supernaturals in line. When she is attacked and nearly killed by a rogue werewolf and a rogue vampire, her mother Renna takes her to Faerie to save her. Will she return to the earth plane and share a life with Luc when she is told he was present when her father died?
Biting Temptation
Louisa has inherited her Aunt Till's house - and so much more that she knew nothing about! Ben introduces her to her vampire hunting skills, but Nis wants to teach her so much more! Is she really a dhampire? Loved the twists in this story as she searches for knowlege - what is it about Nic that entraces her?
Loved it!
The Vampire Queen
Ella has aways felt different and knew she didnt belong - but she had to look after her mother and the farm. When Gary finds her Grimoire, he threatens to tell everyone in Conway her secret unless she has sex with him. She snatches her book back, steals his truck and runs, heading for a hunting hut that she knew would keep her precious family hierloom safe. She falls down a mountain, and wakes up with three strange men taking care of her. Xander, Dasius and Davon have secrets, and it seems that Ella holds the key to their future. What is the truth about her? Will she get home in time to help her ailing mother?
Phoenix Rising
Hana is a phoenix, but they are banned by the tigers, and the tattoo on her arm proclaims that hse is loyal to the dragon clan. Katana is half dragon and half tiger - and when he meets Hana when she is trying to work under cover, he is curious about her. Will Hana be able to find out why the younglings in town are being killed? What does the mark she has found on them mean? Or will Katana be the end of her road? Will they be able to beat the Tiger Queen, and bring peace to all of the clans? Great story!
Her Biker's Bite
Richard has taught Tiffany well - she is useless and stupid, and causes men to want to hit her by her own actions. Three years later, Tiff still believes him, and when she meets Gideon, who takes the job she was passed over for, she is still convinced that she is not worth a relationship.
When Gideon reveals his secrets, she just wants to run - she still doesnt know why he is really working at her firm, but his appeal frightens her. But when Richard shows up again, she turns to the only person she knows who can - and might - protect her. Will she be able to help Gideon regain his mortality and break the curse? Or will Richard win in the end? Loved the twists in this story!'
Moonlight Bite
When Amy and Olive go for a holiday after Amy has recovered from her cancer, they head to an exclusive singles holiday resort on an island. Amy meets Ettiene when she thinks he is commiting suicide by jumping off a cliff into the ocean, and thinks she manages to save him - but Ettienne has secrets he must try to keep hidden. He erases the memories from her mind, and Amy goes home to battle another round of cancer. But the memories tickle the edge of her mind - will she remember, and return to he man she has fallen in love with? Will Ettienne allow her to stay this time? Will these two have their hea? Loved it!
The Vampire Queen
Alessandra is the Queen of the vampirs, and she wants peace with the humans. But she has a secret - she is in love with a shifter, and that means death if they are discovered, even for the Queen. When a witch decides to use the Vampire Queen toi get vengeance against the humans, she hreatens Marcus too - will Alessandra be able to protect all f her people, the humans and her lover?
Undyng Night
Katrine's mother had been killed by a rogue vampire, so Lisette and her enclave had taken the little girl in and raised her. She knew about both worlds, but really had no idea how to live in the daylight.
Lucien was the last of the male vampires, and had lived in hiding for decades. But when he visits the club Eternal, he is fascinated but the human Katrine.
There has been a murder by a vampire - what is going to happen to this couple - are they meant to be together? Who is the murderer?

Nicole Henderson
TOP 500 REVIEWER
5.0 out of 5 stars Collection with Bite
14 February 2020
Format: Kindle Edition
A great collection of authors who have written stories that all contain a Bite. The stories and authors are as follows:

I could write a review for all the books but you’d be reading a book in itself just know that I loved all of the stories and highly recommend this collection.

Deb from Oz
TOP 50 REVIEWER
5.0 out of 5 stars A wonderful anthology
5 February 2020
Format: Kindle Edition
This is a wonderful collections of stories that will keep you entertained for hours There where favourite authors included but a few new ones for me to be introduced to which is always good The set includes

Phoenix Rising by Jess Devine
With Hanna been a phoenix a breed banned by the tigers who are in control she needs to work undercover to find out who is killing the younglings. Katana a half dragon half tiger is intrigued by Hanna but what will he do when he finds out what she is.

Taz C
5.0 out of 5 stars A hot and varied collection
6 February 2020
Format: Kindle Edition
I received a copy of this collection as I follow one of the authors. What was fantastic about it was I was exposed to a whole new group of authors that I would not normally have encountered or read. There are 10 different stories across almost 2000 pages. That in itself makes it a great read. If you find a story you can't engage with (not that I did) you can move to the next one. At the end I am have definitely found a few new authors that I will keen to see other stories they have written. It really had something for everyone. Just loved it.

barbie-ann
TOP 500 REVIEWER
5.0 out of 5 stars A must read book
8 February 2020
Format: Kindle Edition
After reading this book I had to take a little time to compose myself and get my thoughts clear in my head before I put them in a review.
Wow this book was amazingly written. Once I started I couldn’t put it down till I was finished. This book has twists and turns you don’t know what’s happening. will they all get there happily ever after or will it all go wrong. To find out what happens go buy the book. You won’t be disappointed I wasn’t.

HazelM
TOP 500 REVIEWER
5.0 out of 5 stars A book with bite. Don't miss it
3 February 2020
Format: Kindle Edition
This is brilliant. I absolutely loved it. Also a great way to find new series/authors. Generally the stories are well-written and exciting and it is totally worth buying. No real favourites and all are excellent.
One of the best compilations I've read in a while.
I received a free copy of this book via Booksprout and am voluntarily leaving a review.
Read more
Helpful
Comment Report abuse
See all 9 customer reviews
Write a customer review

Go to Amazon.com to see all 56 reviews 4.5 out of 5 stars
Get FREE delivery with Amazon Prime
Prime members enjoy FREE Delivery and exclusive access to movies, TV shows, music, Kindle e-books, Twitch Prime, and more.
> Get Started
Back to top
Get to Know Us
Make Money with Us
Let Us Help You
And don't forget:
© 1996-2020, Amazon.com, Inc. or its affiliates