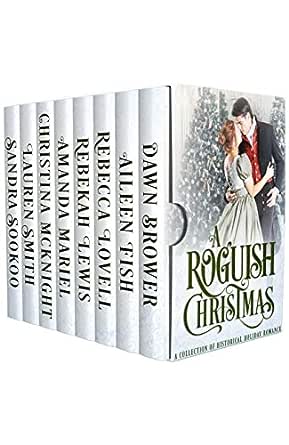 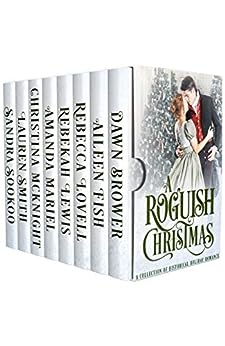 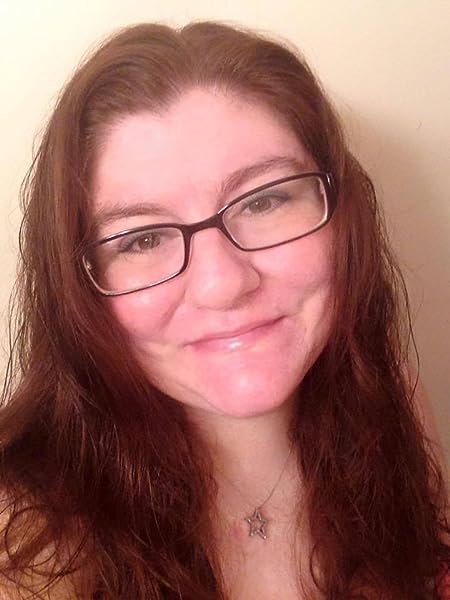 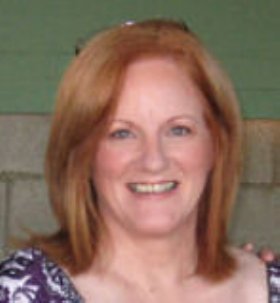 A Roguish Christmas is filled with kisses, love, and romance. Get lost in EIGHT tales guaranteed to lift your holiday spirits...

Rebellious Angel by Dawn Brower: Angeline Marsden finds herself in trouble she can't extricate herself from. She turns to the one man she can always depend on. Much to Lucian, the Marquess of Severn's dismay he's always been drawn to Angeline. When she finds herself in a mess of her own making he comes to her rescue and offers to marry her.

Chasing Lord Mystery by Aileen Fish: Lady Miriam's mother accused her of chasing Lord Mystery after a noble act by a handsome gentleman six years ago became the measure of all other men. Now he's staying at the home where she'd hoped to escape a matchmaking summons from her grandfather, the Duke of Danby. Terrified Northcotte will recognize her and reveal the contents of the scandalous letter she wrote him years ago, she can't decide which is the bigger threat: the duke armed with a special license, or Lord Mystery, who carries a secret she'd never live down.

A Very Mari Christmas by Rebecca Lovell: Isabel verch Mathias always enjoyed the tradition of the Mari Lywd, and after becoming enamored of the player's voice becomes determined to find the man beneath the costume. Unfortunately, Philipe ap Moris has fallen on hard times and is working for Isabel's father under an assumed name, and so resolves to keep her as far from his secret as possible. While Isabel searches for the mystery man of her dreams, Philipe finds himself developing feelings for the headstrong woman in spite of his best efforts.

Hela takes a Holiday by Rebekah Lewis: It's lonely being the queen of the dead. Hela longs for a life among the living, and a chance at love. When Loki grants her wish, she's elated…only to discover later that even a trickster god's daughter isn't safe from his deceit. Can she find true love in the arms of a Viking warrior in the land of the living, or will she be the cause of an entire village's destruction?

How to Kiss a Rogue by Amanda Mariel: Lord Christian St. Vella the Marquis of Knightly has no desire to marry. The more Lady Natalie chases the more irritated he becomes. As the party progresses he cannot help but see past her shallow exterior and recognizes a lady he could fall for.
Will they come together to share a unforgettable Christmastide?

A Kiss at Christmastide by Christina McKnight: After a ruinous London season, Lady Pippa Godfrey has given up on the idea of true love--until a devilishly handsome stranger arrives at her Somerset estate, seeking shelter from a winter storm. Soon, she's daring to claim a Christmas kiss with Lucas Hatfield, the Earl of Maddox, but when the storm abates, will he break her heart like all the rest?

The Rogue's Seduction by Lauren Smith: Perdita Darby is desperate to avoid a fortune hunter and the only way to escape him is to engage herself to Vaughn Darlington, the notorious Devil of London, a rogue so wicked that no other man would cross him. But when Perdita braves the winter chill at midnight and seeks his help, she discovers the viscount's passionate kiss heats her body and makes her heart sing with forbidden longing. What begins as a fake engagement becomes a tarnished lord's secret wish, to have true love on Christmas.

One Silent Night by Sandra Sookoo: Lady Tabitha Sinclair doesn't need or want a man, but this Christmastide season, she hopes she will be more than a wallflower. The Honorable Duncan Beauchamp wants one silent night to himself, for he's sworn off women. A series of banter and flirt-filled meetings throughout the ballrooms of London together just might change their minds and give them a love they didn't know they needed.

Lori Dykes
5.0 out of 5 stars Love, Love, Love!
1 December 2019 - Published on Amazon.com
Verified Purchase
An amazing collection of eight holiday romances that are sure to put you in the spirit!

The Rogue's Seduction
Lauren Smith
Perdita Darby was desperate. How desperate you ask? Enough to go to a known Rouge’s house, Lord Vaughn Darlington, and ask him to pretend to be her betrothed!! Pursed by a dangerous man, Samuel Milburn, who was trying to blackmail her, she needs protection and feels Vaughn could provide that for her. Being down on his luck and still grieving from the death of his brother, Vaughn begins to feel something come to life with Perdita's request. Her family was hosting a Christmas party and she planned for her father to announce their engagement so Milton would hopefully leave her alone!! The party proves interesting as secrets come out and the intrigue begins! Lauren Smith always delivers an engaging story that leaves the reader wanting more. I so enjoyed this story and fell in love with the characters!! You will too.

One Silent Night
Sandra Sookoo
A story of finding ones self and trying to find happiness in normal life. Under her father's direction, Tabitha had been an undercover agent for the crown since she was eighteen years old. With his death she was now to go back into society and be herself, at least for three months until the new head of the operation returned (Lord Achewyne who you will know if you have read the series). Not in disguise, not as someone nobody noticed, but herself. How did she do that? At a musical evening with her mother, she looked around and caught the eye of a gentleman who looked as uncomfortable as she did. To her surprise he came and sat beside her. Duncan was out in the Ton due to the pressure being put on him to marry. Having come back from being in the military in India, he just wanted peace and silence in his mind. This is a wonderful story of a meeting by fate, when two people find there is a kindred soul just waiting to be found.

Emily Pennington
5.0 out of 5 stars Great Christmas Collection !
27 November 2019 - Published on Amazon.com
Verified Purchase
A Roguish Christmas is filled with kisses, love, and romance wrapped in EIGHT tales guaranteed to lift your holiday spirits. Below is a review of one of the stories to give you an idea of what’s inside.

*** Reviewing “REBELLIOUS ANGEL” By Dawn Brower ***
Angeline Marsden has a strong attraction to her best friend's older brother, Lucian. She is also a headstrong young lady with her own plans and ideas which puts her in trouble she can't extricate herself from. She knows there is only one person she can depend on to help her and her situation can only be fixed if she marries Lucien, the Marquess of Severn.

Lucian’s plans had not been to marry his sister’s friend. But he is the only one who can do the honorable thing to save her. With help from their families, will they overcome their stubbornness and realize they are actually perfect for each other?

This is a wonderful read for the Christmas Season. Get into the spirit and grab this collection for your reading enjoyment!

Mary Gallo
1.0 out of 5 stars Story is wrong
28 November 2019 - Published on Amazon.com
Verified Purchase
I guess this book never made it to a beta reader or an editor. 'A Very Mari Wedding' was printed with the chapters out of order. It makes no sense. I am so disappointed that the story didnt make any sense. I don't want to waste time reading the other stories. What a waste of time and money.
Read more

Raine
5.0 out of 5 stars Love for all
18 January 2020 - Published on Amazon.com
Verified Purchase
I have to buy this collection in paperback. I could read them over and over. I highly recommend them. .
Read more
Go to Amazon.com to see all 23 reviews 4.4 out of 5 stars
Get FREE delivery with Amazon Prime
Prime members enjoy FREE Delivery and exclusive access to movies, TV shows, music, Kindle e-books, Twitch Prime, and more.
> Get Started
Back to top
Get to Know Us
Make Money with Us
Let Us Help You
And don't forget:
© 1996-2020, Amazon.com, Inc. or its affiliates