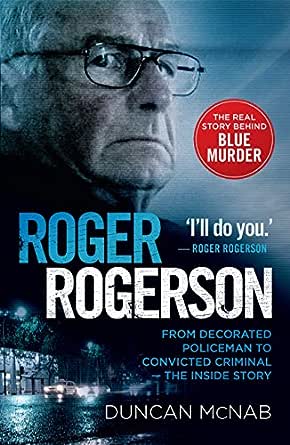 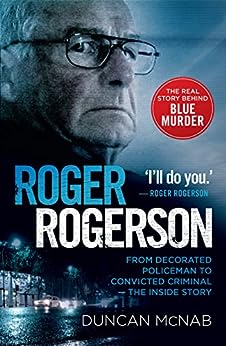 Duncan McNab is a former police detective, private investigator, investigative journalist and media adviser to government and the private sector. He is the author of over seven books, including the phenomenally bestselling DEAD MAN RUNNING (with Ross Coulthart), OUTLAW BIKERS IN AUSTRALIA, and WATERFRONT. Duncan was a producer on the Kennedy and Clarion award-winning MURDER UNCOVERED series (7 Network) in 2017. In 2017 his book GETTING AWAY WITH MURDER won the Ned Kelly Award for Best True Crime. In the same year his bestselling book on disgraced former detective and convicted murderer ROGER ROGERSON was shortlisted for the Ned Kelly Award for Best True Crime.

Adam Webb
5.0 out of 5 stars Eye opening
Reviewed in Australia on 7 May 2017
Verified Purchase
How is it that a 73 year old man is one of the most dangerous people in NSW? This is a great book. Rogerson is an incredible character for all the wrong reasons and McNab captures that character well. Unfortunately there is no answer to the question as to why Rogerson went bad. No books on Rogerson really answer this question. McNab has a bit of a weird obsession with using commas in the wrong place that really throw the context of a sentence of track.
Read more
Helpful
Comment Report abuse

Kindle Customer
5.0 out of 5 stars A great read.
Reviewed in Australia on 6 April 2018
Verified Purchase
I found this book to be well written and shed some further light into Rogersons life, someone who I assumed to be crooked, but an alright bloke. Though after reading realising that Roger is someone who is clever, a scumbag, manipulative and opportunistic only ever interested in helping himself for a quick buck at every turn. A great read and very difficult to put down. I recommend this book to both die hard true crime readers as well as the casual observer.
Read more
One person found this helpful
Helpful
Comment Report abuse

R. R.
4.0 out of 5 stars Gripping story
Reviewed in Australia on 11 February 2018
Verified Purchase
I found it hard to put down. The detail was amazing and the exploits astonishing. It certainly appears that justice was finally served
Read more
Helpful
Comment Report abuse

Kevin from NSW
5.0 out of 5 stars Five star read
Reviewed in Australia on 12 November 2016
Verified Purchase
The history of Sydney and the demise of a well known character. A well reported read covering the end of an era.
Read more
3 people found this helpful
Helpful
Comment Report abuse

me
5.0 out of 5 stars Absolutely loved it
Reviewed in Australia on 27 August 2017
Verified Purchase
Loved from start to finish.
Couldn't put the book down
Highly recommended read.
Very well written
Enjoyed it throughout
.

Ross H
4.0 out of 5 stars see a truly bad bloke getting his come-uppance
Reviewed in Australia on 17 November 2016
If you have read any books about Australian crime in the 1970s and 1980s, the name Roger Rogerson most likely will not be a stranger to you. He was certainly no stranger to the news media, having actively courted them for years. More recently, people like myself made a point of reading the Sydney newspapers to see what was happening in the trial of Rogerson and his accomplice Glen McNamara for murder.

McNab is a former police detective, private investigator and investigative journalist as well as being personally acquainted with Rogerson on the job, which gave him a possibly unique outlook in being able to write this and the earlier work. It covers a lot of ground about both Rogerson and McNamara, making it a fascinating account. If you have any interest in true crime, corruption and seeing a truly bad bloke getting his come-uppance, then this is definitely the book for you.
Read more
3 people found this helpful
Helpful
Comment Report abuse
See all reviews from Australia

Jumby
4.0 out of 5 stars What a pair of crims!
Reviewed in the United States on 13 October 2017
Verified Purchase
This book certainly changes your mind about Rogerson and McNamara. Interesting read and well written
Read more
Helpful
Sending feedback...
Thank you for your feedback.
Sorry, we failed to record your vote. Please try again
Report abuse

K. J. Robertson
4.0 out of 5 stars Interesting work
Reviewed in the United States on 15 March 2017
Verified Purchase
Good to see an unbiased and factual account of these police officers who were meant to uphold the law but were major offenders.
Read more
Helpful
Sending feedback...
Thank you for your feedback.
Sorry, we failed to record your vote. Please try again
Report abuse