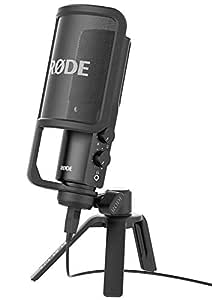 The NT-USB is a highly versatile side-address microphone that is ideal for recording singing and musical performances in addition to spoken applications such as podcasting and voice-over. It is fully compatible with all mainstream recording applications on both Windows and Mac OS based computers, as well as the Apple iPad using RØDE Rec, GarageBand or any other recording app that accepts an external microphone. Use on the Apple iPad requires a suitable USB connection adaptor, such as the Apple Camera Connection Kit. The body of the NT-USB features a zero-latency stereo headphone monitoring (3.5mm) jack, which allows you to monitor the microphone input in realtime, along with dials to adjust the monitoring level and mix between the computer/iPad audio and the microphone input. A premium pop-filter is included, which fits onto the base of the mic, positioning the filter the ideal distance from the capsule to minimise plosives (hard `B', `T' or `P' sounds that produce a harsh sound) during singing or speech. Also provided is a high-quality stand mount with industry-standard 3/8-inches thread, desktop tripod stand that allows the NT-USB to sit at a comfortable height on a tabletop and a pouch for storage of the microphone when not in use. Compatible with both Windows and Mac computers, as well as the Apple iPad via the USB camera connection kit (available directly from Apple) Gain Setting: When the gain is set too high, the microphone will be too sensitive and can pick up room noise that can even be heard as a hiss. When the gain is set too low, the microphone will be barely audible. Also compatible with the SMR shockmount and WS2 foam windshield.

EricTJ
5.0 out of 5 stars Insanely sensitive, so not ideal for the home podcaster.
19 July 2018 - Published on Amazon.com
Verified Purchase
I bought this to do podcasting and it is a fantastic mic but as a condenser mic is insanely sensitive. It hears things I can't hear. I don't have a sound isolated space and it picked up the cat drinking water 15 feet away, the low hum of the heat pump on the roof, every sound my clothing made when I moved, even scratching my face. I am returning it for that reason and getting the MXL BCD-1 dynamic mic instead, which I've read is used in some radio stations, so that's good enough for me. Don't buy the Rode unless you have a very controlled sound space to record. I wish I could use it, but it's not right for my needs.
Read more
102 people found this helpful

I now have a Rode NT-USB microphone attached to the SM6 Shock Mount, all on the PSA1 Studio arm.

I am not a professional Audio Engineer, and have been learning about all this on my own. However, I am a professional looking for great narration. This product fits my needs and my budget. In comparison to the Blue Yeti/Radius II set up I have, this is slightly better. There is slightly more control with this microphone than the Blue Yeti for Unidirectional sound. The Blue Yeti works great, and has a few functions this Microphone does not. For basic narration, where you only want to pick up sound/voice from one direction this mic is better.

I use this microphone with Audacity, and Storyline 2 for software. It works great, and produces a high quality sound that I need to engage learners.
I would buy this product again.

Logan D.
5.0 out of 5 stars Absolutely Amazing!!
2 January 2019 - Published on Amazon.com
Verified Purchase
I had a Blue Yeti microphone because everyone claimed it was the best but in my experience it was a piece of garbage. Since I'm not a Sound Engineer I could never get it to sound right. I always sounded tinny with tons of hissing.

Enter this wonderful mic. Rode is one of the best, no question there. But unlike the Yeti I just plugged this into my computer and it sounded amazing. No hiss, nice and loud and my voice was crisp and clear. It wasn't overly sensitive and I could record podcasts right in my living room. Best of all, I could plug it into my iPad and make recordings on the fly.

I spent two weeks researching mics and ultimately bought this. So take advantage of my extensive work and buy this mic. And let me answer your question.. After recording your first track and you listen to yourself, Yes! That is what you sound like. Sorry if you thought you sounded like George Clooney or Kate Winslet. But that's what audio effects are for!
Read more
20 people found this helpful

A. Meyer
5.0 out of 5 stars The Rode NT-USB Best of It's Kind
20 March 2018 - Published on Amazon.com
Verified Purchase
I bought this microphone based on some internet videos that demonstrated the sound quality, and I'm glad to report that it delivers beautiful, dynamic range and is very sensitive. I am using this microphone for my internet radio show, and my listeners noticed a marked improvement in audio quality. It also comes with the pop filter you see in the photo and what must be the longest connect cord I've ever seen, which is great! The box also comes with a pouch for the microphone for secure. Final thoughts...in terms of sound, the Rode NT-USB Condenser Microphone is better than my Blue Yeti or Audio Technica AT 2020, both of which I'm shelving. Sure, the Blue Yeti has more functional controls, but I am a stickler for sound quality, and the Rode delivers plenty of that for a USB microphone.
Read more
24 people found this helpful

Bejan
5.0 out of 5 stars Mixing Engineer's Review
14 November 2015 - Published on Amazon.com
Verified Purchase
I am a Professional Studio Mixing Engineer. So when I review this mic, you know you can trust my judgement.
I decided to get this mic for my home use. It's FANTASTIC! Crystal clear vocal recording. It is very sensitive, so it will pick up background noises and chatter, so be sure you are in a very quiet place when you record. The actual quality of the recorded vocals however, are beautiful, clear, and does not require too much tweaking to get the vocals up to the industry standard, through effects, etc.
I would highly recommend this mic to anyone who does home/studio recording, podcasts, and so on.
Read more
115 people found this helpful
Go to Amazon.com to see all 405 reviews 4.3 out of 5 stars
Get FREE delivery with Amazon Prime
Prime members enjoy FREE Delivery and exclusive access to movies, TV shows, music, Kindle e-books, Twitch Prime, and more.
> Get Started
Back to top
Get to Know Us
Make Money with Us
Let Us Help You
And don't forget:
© 1996-2020, Amazon.com, Inc. or its affiliates