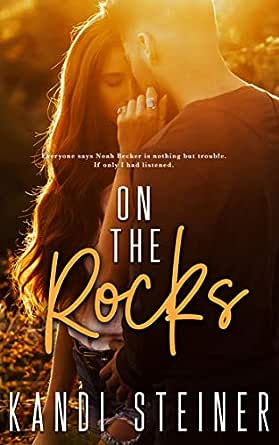 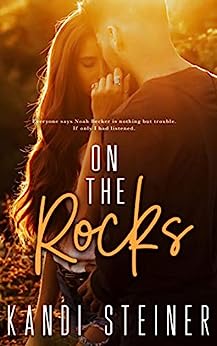 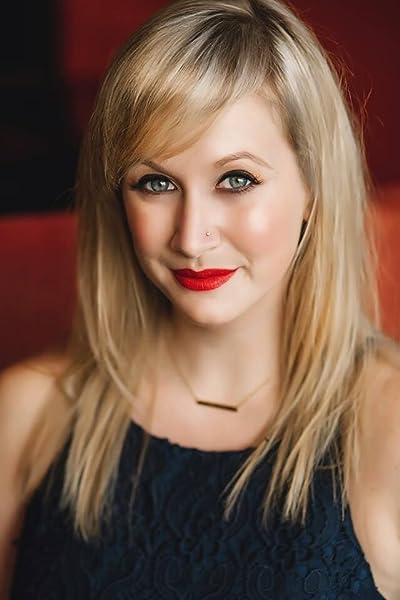 4.6 out of 5 stars
4.6 out of 5
212 global ratings
How are ratings calculated?
To calculate the overall star rating and percentage breakdown by star, we don’t use a simple average. Instead, our system considers things like how recent a review is and if the reviewer bought the item on Amazon. It also analyses reviews to verify trustworthiness.

Kim Ristuccia
1.0 out of 5 stars On The Rocks. Review
Reviewed in Australia on 27 July 2019
Verified Purchase
Really slow. Have not finished it. May go back to it.
Read more
Helpful
Report abuse

Lisa Hines
TOP 500 REVIEWER
5.0 out of 5 stars Review: On The Rocks
Reviewed in Australia on 15 June 2019
On the Rocks by Kandi Steiner is a sweet and sassy contemporary small-town romance. Told in dual points of view between Noah and Ruby, this romance will make you swoon, has just enough angst to keep you completely hooked, and is so well-crafted that the slow-burn will literally set you on fire.

Noah is the bad boy, the one Ruby is warned away from many times. First, as a child in church later as an example of who NOT to associate with. An older, sexier, rough around the edges man who sees Ruby for who she truly is, not who she has crafted herself to be for her family's sake. Ruby has always been intrigued by Noah but her return to town and recent run-ins make it all the more obvious that who she is with is nothing like who she needs to have in her life.

There has not been a Kandi Steiner book I've read that I haven't absolutely loved and obsessed over. Enjoy!
Read more
2 people found this helpful
Helpful
Report abuse

AmbzyRoseBooks
5.0 out of 5 stars Loved this story x
Reviewed in Australia on 12 August 2019
This was the first book I've read from Kandi Steiner and I've had this book and a few others on my TBR for awhile. I can't believe it took me so long to read this because I absolutely loved it.

Such a sweet small town forbidden romance that I could not put down.

Noah Becker was a sexy, sweet playboy who worked as a barrel raiser at Scooter Whiskey Distillery like his late father. A bit of a bad boy as people in town would say but he knew he wanted a love like his parents but was waiting for that right woman to come along and sweep him of his feet and that's what our girl Ruby Grace Barnett did when she came back to town.

Ruby Grace is a sweet, down to earth girl who is the Mayors daughter and engaged to another man. She's had to grow up too fast and now she's a bit lost and doesn't know if the life she's been grown up thinking was right is what she wants. Noah shows her what she's really missing with her life and I honestly couldn't stop smiling with them I loved everything about these two. They were perfect for each other and I loved watching their love grow and the barriers they had to overcome to get there.

I loved this story so much and I can't wait to read Logans book next and learn more about this family and watch those Becker boys find their forever love.
Read more
One person found this helpful
Helpful
Report abuse

Krystal
5.0 out of 5 stars Becker Brothers!
Reviewed in Australia on 18 December 2019
I do love me some good ol’ country loving and damn! Kandi delivered the goods with Noah and Ruby Grace!
I really enjoyed this book and the chemistry between Ruby Grace and Noah was off the charts! I loved reading about him encouraging her and being her cheerleader and strength from the get go. He pushed her to be honest with herself about what she wants in life and gave her the courage to pursue it.
Ruby Grace made Noah realise that a love like the one his parents have is possible and that it’s a good thing he held out for it. She is sassy, sweet, loyal, caring and stunning! He is sexy, rude, swoony, supportive and so loyal...he also fills out a pair of jeans perfectly!
These two set my heart (and kindle pages) on fire!!!!
Cannot wait to dive into the next Becker boy book! (Say that 5 times fast!)
Read more
Helpful
Report abuse

bipana
5.0 out of 5 stars Worth your time
Reviewed in Australia on 23 December 2019
On the rocks is my first book of Kandi and I am glad I got hold of her books. Banter between Ruby Grace and Noah is everything. Ruby Grace is young beautiful inside out and Noah is old and oh very sexy. They shouldn’t get attracted to each other given their circumstances but they fell for each other anyway. I love both of them and I love becker’s family. Cannot wait to find out about others .

Brooke
5.0 out of 5 stars A welcome relief to read
Reviewed in Australia on 11 August 2019
I’ve read Kandi’s work before and really loved it. I’ve been reading other authors before I came back to this book and it was such a relief to come back to a well-written, plot-twisting romance/drama I almost cried (ok, I did!!)

The book is centred around Noah & Ruby Grace and alternates their point of views.

It kept me hanging until the end and which I thoroughly enjoyed and will be reading the other books in succession. Well done Kandi.
Read more
Helpful
Report abuse

Tracy booklover1972
5.0 out of 5 stars Loved it !!!
Reviewed in Australia on 20 June 2019
Gosh I'd been reading some really crappy books lately but this one was not one of them. I fall in love with Noah and Ruby Grace., And all of Noah's family. This book is well worth the read. The story line was great and exciting and sworn worthy. I won't give anything away.....just read it. I promise it'll be worth it. ❤️
Read more
Helpful
Report abuse

Jade B
4.0 out of 5 stars On The Rocks
Reviewed in Australia on 4 June 2020
This book is funny, and sweet and all the things a good romance book should be. I really enjoyed it!
Read more
Helpful
Report abuse
See all reviews

n young
4.0 out of 5 stars 4 Tennessee Whisky stars!
Reviewed in the United Kingdom on 27 August 2019
Verified Purchase
Yet another fab read by the talented Kandi Steiner!
This cover actually drew me in making me pick this for my next read by Kandi.. its beautiful and made me want to read this story badly... I feel like I want to give this story 5 stars but unfortunately it was lacking something for me but I did really really enjoy it.
So we have Noah.. rough ready boy with a past Noah.. still living near home in his small town in the whisky factory that his dad had a major part in.
Then we have Ruby Grace.. back in town to marry her doting political fiance.. she is giving up her life to support him in his new career...
But when Ruby Grace goes to buy her husband to be a gift these characters get more than they bargained for!
Angst.. swoon worthy moments.. emotions.. laughter and more is all combined to give us this great read!
Read more
Report abuse

Charlotte
5.0 out of 5 stars 5 big Becker stars from me!
Reviewed in the United Kingdom on 11 July 2020
Verified Purchase
I loved this book from the very first page to the very last one!
On The Rocks is the first book in the Becker Brothers series where we follow Noah's story but we get to meet his amazing family of brothers and his adorable momma along the way which made me want to read their books to find out their stories as I completely fell in love with the Becker family.
Noah is one hot cookie, just a shame he's not real :( lol.
5 stars from me, I'd highly recommend this book!
Read more
Report abuse

Tracy
5.0 out of 5 stars Amazing
Reviewed in the United Kingdom on 22 February 2020
Verified Purchase
Loved this book from start to finish. Kandi has such a way of writing characters that you automatically fall in love with them and feel everything they feel. I swear at one point my heart actually hurt. Fantastic HEA and definitely one I will read again when I an in need of a pick me up. Thank you Kandi.
Read more
Report abuse

Shoefreak
4.0 out of 5 stars Kandi Steiner never disappoints
Reviewed in the United Kingdom on 10 July 2019
Verified Purchase
Have read several of Kandi Steiner's books and have loved every one. On the Rocks has that wonderful element of angst so that the reader doesn't know until the end whether they are going to get their HEA or not. A beautifully crafted book which I know you will love. Buy it now.
Read more
Report abuse

Brittany Parent
5.0 out of 5 stars Tennessee, whiskey, and summer heat make for a fantastic read
Reviewed in Canada on 27 July 2019
Verified Purchase
**I did sort of an acrostic style poem review. An acrostic poem is a style of poetry using the first letters of a word or words to describe what you are talking about. For example, I used the title On The Rocks. With each letter I told a bit about the book and what I thought of the book.

On a hot summer day in June a man and a woman’s relationship is on the rocks and whiskey is not far behind
Noah Becker is a whiskey distillery worker. He loves his whiskey, it’s the first thing he thinks of when

Tennessee comes to mind
He thinks whiskey and his family is all he needs, but it isn’t until a girl or should I say a woman, with flaming red hair, strawberry smoothie lips, “and heels that made her legs stretch on for days” (his words not mine) that makes him rethink
Everything. (Just one word, sums it up, don’t you think?)

Ruby Grace Barnett is the mayor’s daughter and about a decade younger than Noah, (she used to kick his pew from behind in Church and have a crush on him)
Oh and one small detail I forgot to mention...she is engaged to a politician she thinks
Cares for her and, maybe he does but not like Noah. Noah sees the real Ruby Grace.
Knows what she really wants to do with her life and what matters to her most.
Stubbornness is one thing that makes this an “on the rocks” romance and so many other things including whiskey, (can’t forget about that good ol’ whiskey ya’ll) that if you want to find out, I recommend you read this wonderful story that has beautiful writing that made me highlight multiple pages in my kindle!

***This book tells you how to drink whiskey properly so that it actually tastes good. I guess when I try whiskey for the first time, I will know how to drink it and I will not throw it back like a shot.
Read more
One person found this helpful
Report abuse
See all reviews
Back to top
Get to Know Us
Make Money with Us
Let Us Help You
And don't forget:
© 1996-2021, Amazon.com, Inc. or its affiliates