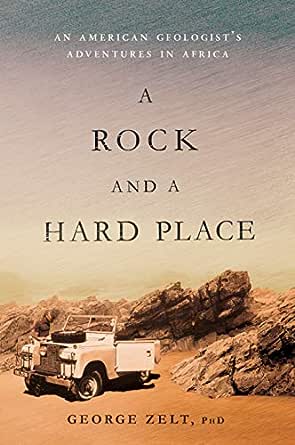 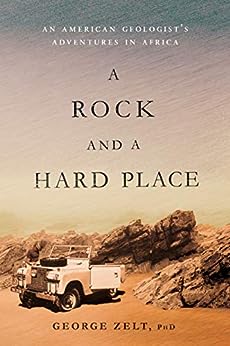 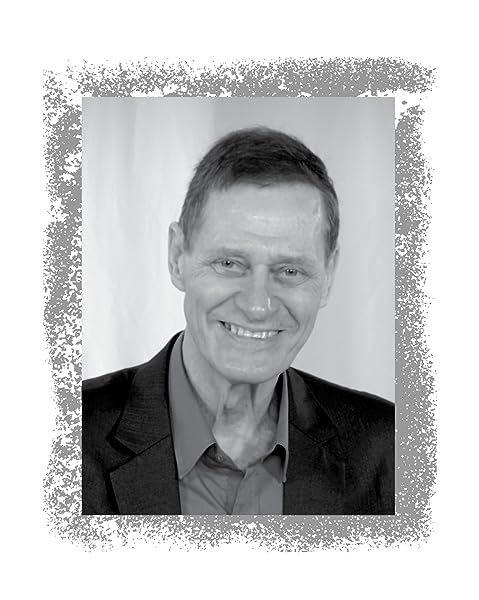 A Rock and a Hard Place:: An American Geologist's Adventures in Africa Kindle Edition

These are just a few of the obstacles that George Zelt encounters as a graduate student in apartheid-era South Africa. In A Rock and a Hard Place, readers will follow George as he explores this contradictory, beautiful country during a time of growth and oppression. With tales of finding refuge in a desert sandstorm, being stalked by a leopard, and narrowly escaping a herd of rampaging Cape buffalo, George’s story will leave readers breathless—their hearts racing, with the imagined grit of sand in their teeth!

Nature is not the only obstacle George encounters. When he makes a discovery that may disprove an established geologic theory, his graduate advisor (and developer of said theory) does everything in his power to prevent George from going public. George has to fight not only against nature but also the politics of university life, all while navigating the complexities of South African culture.

Who would have thought studying rocks could be so thrilling?

George left his Buffalo, New York, home in the 1960s when he was seventeen years old to hitchhike across the United States and Canada on such famous roads as Route 66 and the Alaskan Highway (sleeping in corn fields and hedges and among huge pine trees). In the 1970s and 1980s, he continued, building a shack on the shores of the Red Sea (which was burned down by vigilantes), traveling the coastal roads of Yugoslavia (where he ate with gypsies), and venturing farther north to the Arctic Circle to see the Laplander people before encountering his greatest challenge in Africa. He worked as an environmentalist and then developed his own company in the lawless 1990s in Russia and Kazakhstan when the Soviet Union disintegrated. He holds five degrees, including PhDs from universities in the United States, Finland, and South Africa and has published scientific articles. He recently moved to Texas with his wife and child after spending two years in Thailand, working on his books.
click to open popover

Emmanuelle Works
3.0 out of 5 stars Mixed feelings about questionable but often fascinating memoir
29 October 2019 - Published on Amazon.com
This one bothers me. It's written like a novel but is supposed to be a memoir. The author writes himself like a hero. He sounds like a typical privileged entitled arrogant white man, not actively racist but he's clearly comfortable among the colonialists and the system they created, and the fact that they, he, still benefit from it, in fact sounding downright like a jilted supremacist when describing how the Africans managed to kick out them out in some of the neighboring countries. His criticism of Apartheid is barely skin-deep. Yet when he describes Africa and talks about his work as a geologist, he's finally genuine, passionate and fascinating.
Read more
2 people found this helpful

suzi badrena
5.0 out of 5 stars This is a must read, a treasure of a shared experience.
18 October 2019 - Published on Amazon.com
Found this book by accident, and it is the best read all year! All of the magnificence of Africa as seen by a single traveler and sharing it with visual description that transport you there. Great story, a character that you grow to feel close to, a brilliant guy with a love of life and adventure, and determine to pursue his goal. I think this book should be winning awards!
Read more
3 people found this helpful

Mallory A. Haws: The Haunted Reading Room Reviews
5.0 out of 5 stars Adventure, Danger, Delight
20 September 2019 - Published on Amazon.com
Delightfully adventurous, reading George Zelt's nonfiction narrative of his decades in geology and petrology is akin to enjoying the wild adventures of his heroes, such as Mark Twain, Jules Verne, and Jack London. Mr. Zelt is well blessed with both the "stories to tell" and the talent and wit to express them well for the edification of readers, many of whom are "armchair travellers" enjoying vicariously.

I reviewed a digital ARC generously provided by author and publisher via NetGalley at no cost, obligation, or remuneration. I opted to review this title.

Terry
4.0 out of 5 stars Interesting Adventure
15 November 2019 - Published on Amazon.com
Not quite what I was expecting, but I enjoyed the chance to read Mr. Zelt's story. It's quite a wild ride.
I enjoyed the hunt for gems, the travelogue and adventure side of the story, along with the chance to learn a bit more about Africa.
Having grown up in the 1970's I was aware of the oppression of apartheid and how awful it was for the South African people. (In my humble opinion, the author made it clear how disturbing it was to him, along with other often overlooked forms of ethnic oppression which were happening).

I didn't care much for reading about his sexual adventures, but he was a young person at the time this book takes place. (I skipped these parts whenever possible. I'm not a complete prude, but the sexual accounts definitely weren't necessary to the story).

mother earth
5.0 out of 5 stars its delightful reading
15 December 2019 - Published on Amazon.com
i don't think for a minute that dr. Zeldt was acting privileged He was acting like the young person, he was taking risks because he was very interested in his field of study and havng and not having an interesting experiences As an amateur afficionado of south african botany and anthroplogy, i was rapt with George's romp
Read more
One person found this helpful
Go to Amazon.com to see all 6 reviews 4.4 out of 5 stars
Get FREE delivery with Amazon Prime
Prime members enjoy FREE Delivery and exclusive access to movies, TV shows, music, Kindle e-books, Twitch Prime, and more.
> Get Started
Back to top
Get to Know Us
Make Money with Us
Let Us Help You
And don't forget:
© 1996-2020, Amazon.com, Inc. or its affiliates