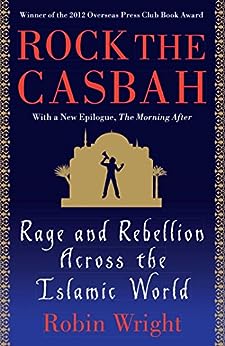 Rock the Casbah: Rage and Rebellion Across the Islamic World Kindle Edition

."..Wright is an expert on the subject and this book is an accessible and riveting account for readers looking to learn more about the post-9/11 Islamic world." "

."..Wright is one of the most capable observers of the Middle East....her chronicles of counter-jihad, anti-militancy, and women's mobilization are a timely contribution."

"If there is such a thing as a pinnacle in the landscape of international journalism, Robin Wright surely stands atop it."

--"The New York Review of Books"

"Only Wright could have written "Dreams and Shadows "because only Wright has traveled so widely, interviewed such diverse leaders, and brought so much wisdom to analyzing the region's many-sided puzzles. This volume, full of mesmerizing detail and large truths, sets a new standard for scholarship on the modern Middle East."

"Robin Wright is well aware of the complexities, paradoxes and the seemingly insurmountable dilemmas facing the Middle East today. She reminds us that in facing these challenges we need not resort to military force and violence or resign ourselves to compromise with extremism and tyranny."

"The best of all possible worlds: An old hand guides us through the changes in the post-9/11 Middle East, and is able to sort out in a sober, smart way what is really going on."

Praise for "Rock the Casbah"

"[Wright] provides invaluable context for what she rightly terms 'the epic convulsion across the Islamic world' by listening to voices we don't usually hear....Anyone seeking deeper understanding of the Arab Spring needs to read Wright's formidably well-informed book ....Wright's richly textured portrait of ancient cultures in the throes of wrenching but liberating transformation makes it quite clear that Muslims themselves will decide their future."

"Wright has long been one of the best-informed American journalists covering the Middle East, and her reputation is born out here. . . . Her book will be essential reading for anybody who wants to know where it is heading."

--"The New York Times Book Review" --This text refers to the paperback edition.

Robin Wright has reported from 140 countries for The Washington Post, Los Angeles Times, The New Yorker, The New York Times Magazine, Time, The Atlantic, The Sunday Times, and others. She has been a fellow at the U.S. Institute of Peace, Woodrow Wilson International Center for Scholars, Brookings Institution, Carnegie Endowment for International Peace, Yale, Duke, and Stanford. She is the author of seven books on international affairs --This text refers to the paperback edition.

Primary Key
4.0 out of 5 stars Reads like a novel
Reviewed in the United Kingdom on 3 April 2012
Verified Purchase
Factual accounts like this can sometimes be dry and difficult to read. Robin Wright has managed to overcome this by making this a very personal account of the Arab Spring with interviews and quotes from those at the "front line".

I think the term "Arab Spring", coined perhaps by the West, was unfortunate as it implied that this would be a short term uprising and then democracy would prevail in the region. As Wright explains this is clearly not the case and makes clear that the region is going to undergo considerable upheaval for years to come. As for the standards of living and opportunities in these countries, it may take a generation or two, before any real change is seen. She compares this to the relative lack of change many black South Africans have experienced in their living standards since the end of Apartheid.

Wright has obviously had a lot more exposure to the Middle East, its people and Islam than most of us, however even though she refers to Saudi Arabia as a unpleasant and intolerant regime, I feel she perhaps underestimates the difficulty that Islam will have in adapting to modernity. Islamic fundamentalism isn't new and nor is intolerance. While Mohammed may have stated that "there should be no compulsion in religion" that was clearly lost on the rulers of Saudi Arabia, Iran, The Taliban and everywhere that Sharia law is used as a means of repression and control.

I was somewhat perturbed by the statement near the end of the book, "I am often surprised by how many people don't know that Muslims embrace Judaism and Christianity as a part of a single tradition". Well that in itself is not entirely true. Islam in fact claims that Mohammed was the last messenger and he was sent to correct the erroneous ways of Christians and Jews because they had failed to live up to the original message. The Koran contains some pretty unpleasant statements about Christians and particularly Jews as anyone who has read it will confirm.

Rock The Casbah is a very interesting and excellent read, all credit to Wright for making such a current analysis available literally while the story continues to unfold.
Read more
One person found this helpful
Report abuse

Brian Griffith
5.0 out of 5 stars More than a journalist
Reviewed in Canada on 23 December 2011
Verified Purchase
Wright has the far-flung contacts, the long-term friendships, the historical memory, and the global perspective to really celebrate the Arab Spring right. Her account is gripping, immediate, sometimes horrifying, and generally celebratory. She pays tribute to a host of heroes who richly deserve our admiration. She is helping Westerners see Middle Easterners the way they see neighbors. Some aspects of this cultural renaissance, such as "Hip-Hop Islam," are hard to convey in a book chapter format. Others, like "The Axis of Evil Comedy Tour" come across quite powerfully, even hilariously. All told, Wright makes it as more than a journalist. This is journalism that empowers friendship and respect.
Read more
Report abuse

jdavidg
4.0 out of 5 stars ignore CNN read this book
Reviewed in Canada on 11 February 2013
Verified Purchase
In a world contaminated by Americanized news, this book is a breath of fresh air.
One wonders where the authors journalism was published or aired. Certainly not
on US mainstream media. This book sheds light on the burgeoning social revolution
within a multitude of countries ruled by "extractive elitist governance" (see
Why Nations Fail - Daron Acemoglu). That these countries are Islamic simply
reminds us that Muslims are people who want what all want: personal security,
education, unbiased rule of law.
Read more
Report abuse

M. A. Seifter
3.0 out of 5 stars Whistling past the graveyard
Reviewed in the United States on 31 May 2021
Verified Purchase
Robin Wright has long distinguished herself as one of the most readable, insightful and predictive journalistic writers on the modern Middle East. Her remarkable series of books penetrate to the innernost hallways of political power and intellectual renown amongst Middle Eastern politicians and intellectuals, as she, ever since the mid-1970s, has recorded the roller coaster of popular ferment, governmental repression, terrorism and intellectual diversity inside this still-roiling and misunderstood region of the world. Her works are all the more remarkable since to my mind Wright has no reading or speaking capacity in the native languages of the region-neither Turkish, Persian/Farsi, Hebrew nor Arabic. Yet, recognizably an outsider, she has once again, in "Rock the Casbah" delivered to the popular reader an optimistic take on the critical year of 2011, the year of the "Arab Spring', when, beginning with popular uprisings in Tunisia and Egypt the entire Middle East appeared to be casting off both tyrannies that had held it captive for many decades: repressive authoritarian regimes and intolerant Islamic terrorism. The problem I found with Wright's book is that her prose appears to be locked into a "whistling past the graveyard" optimism regarding the eventual success of all the uprisings that followed Tunisia's "Jasmine Revolution" in January 2011. And, despite her cheery, cheerleader-like enthusiasm for liberation from authoritarian regimes and terrorism as defining, determinative features in the Middle East, with the possible exception of Tunisia, everything went wrong in the following years, with the regimes rebounding to re-cement their authority across the region, with the Taliban continuing to wreak havoc and bloodshed in Afghanistan, and with the Palestinians continuing to be persecuted by Israel in the Territories and oppressed by the fundamentalism and terrorism death cult of Hamas in Gaza. Likewise, in Iran, Iraq, Syria, and Bahrain, authoritarian regimes survived, beating back "the will of the people" with extreme brutality. Wright's perspective as an objective, authoritative source for long-term insights about the Middle East suffer exceedingly in this respect. Also hurting her book is her end-of-text footnotes, reduced to a string of at the moment websites and blogs, meant to capture the moment by moment flow of events throughout the region that she regarded as determining its eventual, hoped for liberation from the twin tyrannies of authoritarian, ossified regimes and unstoppable Islamic terrorism. She offers no analytic conclusions, arguments or non-blog texts in these footnotes, that might, if included, might have elevated her arguments above the level of an enthusiastic, glassy eyed amateur. Best part of this book, I feel, is Wright's discussion and interviews illustrating discordant, anti-fundamentalistic culture among, esp, young Muslims across the region. But her political naivete, amateur, outsider-status authority, and the overall failure of the very forces of popular revolution in the Middle East reduce the quality of this book, while its readability and quick pace make it an attractive read for Americans seeking some explanation of the events in that chaotic year 2011, the year of the attempted liberation of the Middle East.
Read more
Report abuse

Bruce E. McLeod Jr.
5.0 out of 5 stars Challenges for the Middle East
Reviewed in the United States on 7 September 2015
Verified Purchase
Robin Wright is experienced and knowledgeable of the Middle East and of Islam in general. Her exemplary historical reviews and the complexities of Islam are truly noteworthy. Her book, "Rock the Casbah" was written in 2011 however, the nascent ISIS has surfaced as a threat to the region. The information contained in her book is still relevant and influential.

Robin Wright is a gem, a widely acclaimed author with a worldwide appeal as a professional journalist. She visited over 20 countries in the region and interviewed key clerics and other notables. Her writing style made for interesting reading. She explains her idea of a "soft revolution" where "Hip-Hop" music, and other protest models, as new challenges, are used by young people to rant against the regimes of oppression and treachery. These ideas have not been revealed before as a tactic of dissent. Accordingly, change is slowly coming to the Middle East by way of the transplanted American genre of "rap".

This is an excellent book, filled with stories from native folks about their culture and how they are coping with the demands of their leaders, living in a "bubble" often without "free will".

Bruce E. McLeod, Jr.
Las Vegas, Nevada
6 September 2015
Read more
4 people found this helpful
Report abuse
See all reviews
Back to top
Get to Know Us
Make Money with Us
Let Us Help You
And don't forget:
© 1996-2021, Amazon.com, Inc. or its affiliates