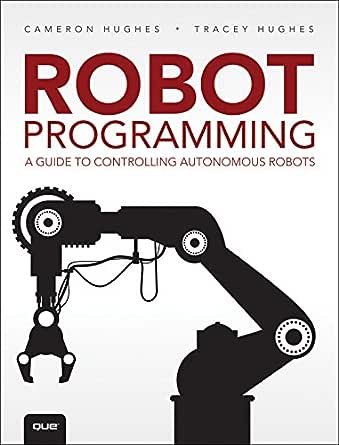 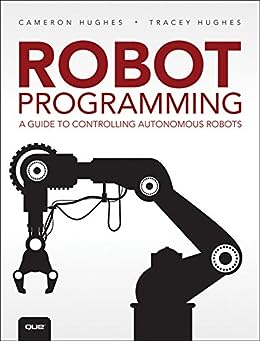 Cameron Hughes is a computer and robot programmer. He holds a post as a Software Epistemologist at Ctest Laboratories where he is currently working on A.I.M. (Alternative Intelligence for Machines) and A.I.R. (Alternative Intelligence for Robots) technologies. Cameron is the lead AI Engineer for the Knowledge Group at Advanced Software Construction Inc., a builder of intelligent robot controllers and software-based knowledge components. He holds a staff appointment as a Programmer/Analyst at Youngstown State University. Tracey Hughes is a senior software and graphics programmer at Ctest Laboratories and Advanced Software Construction Inc. where she develops user interfaces and information and epistemic visualization software systems. Her work includes methods of graphically showing what robots and computers are thinking. She is on the design and implementation teams for the East-Sidaz robots at Ctest as well.

Both Cameron and Tracey Hughes are members of the advisory board for the NREF (National Robotics Education Foundation) and members of the Oak Hill Collaborative Robotics Maker Space. They are project leaders of the technical team for the NEOACM CSI/CLUE Robotics Challenge and regularly organize and direct robot programming workshops for the Arduino, Mindstorms EV3, LEGO NXT, and RS Media robot platforms. Cameron and Tracey are two of the authors of Build Your Own Teams of Robots with LEGO® Mindstorms® NXT and Bluetooth, published by McGraw-Hill/TAB Electronics, January 2013. They have written many books and blogs on Software Development and Artificial Intelligence. They’ve also written books on multicore, multithreaded programming, Linux rapid application development, objectoriented programming, and parallel programming in C++.

John S6r
2.0 out of 5 stars Best to look for alternatives
Reviewed in the United States on 23 October 2017
Verified Purchase
I suggest passing on this book, and looking for others that cover the topic you are interested in.

I have the feeling the authors set out to write an awesome book. But as they worked on the book, they found themselves pulled in too many directions when trying to cover such a complex topic. The result is a book that accomplishes very little, and yet takes a lot of mental energy to read.

Here's the problem. If you are trying to learn:

How to build a robot...
This book is too shallow and theoretical. You will finish the book with very little capability to build an actual robot.

How to apply your existing programming skills to a create an autonomous robot...
The code in this book is more like pseudo-code and avoids showing how to program things like a motor controller class, or a sensor interpretation class. The code examples use fictitious classes like PathPlanner that assumes it simply returns a path to follow. And yet the other pseudo-code is also too low level to show how to program something like a path planning class.

How to program for the first time...
It just doesn't go into that. Find a popular Object-Oriented Programming book.

How to think about designing a robot that will think for itself...
This book only discusses programming robots to perform KNOWN tasks in KNOWN environments. It does not cover programming robots to perform previously unknown tasks, or work in previously unknown environments. That's really why I was looking to learn to program autonomous robots. Unfortunately, the book doesn't state that this is its focus until the last chapter as it summarizes what it covered.

And generally, it's a hard to digest book. In an apparent attempt to take complex programming and physical problems, and make them obvious to unfamiliar readers, the authors use a variety of silly acronyms and metaphors that are a bit too contrived. For example: BRON (Bluetooth Robot Oriented Network) as a way to label common sidebars from robot history that relate to the text (but has absolutely nothing to do with Bluetooth).And REQUIRE (Robot Effectiveness Quotient Used In Real Environments) which is just the idea that a robot's hardware needs to be capable of executing the task, like if it needs to detect color it needs a color sensor (why not just call it a Capability Assessment?).

There are also LOTS of errors in the book. Typos, grammatical errors, incomplete sentences, and in the first half of the book about 1/3rd of the code examples are mislabeled (a Java code example labeled as Arduino, and vice-versa).

And a personal dislike, the figures and code examples appear after they are discussed in the text. Sometimes, several pages after. You find yourself flipping pages back and forth to look at the diagram/figure so the text makes sense.

Fortunately, the book does have references to several interesting robot hardware components, and refers to several other books for readers who want to read about the topics this book avoids.

My suggestion: Save yourself a lot of time and frustration, and consider other books.
Read more
25 people found this helpful
Helpful
Sending feedback...
Thank you for your feedback.
Sorry, we failed to record your vote. Please try again
Report abuse
Load more international reviews

Daniel Z. Dias de Moraes
4.0 out of 5 stars Nice starting point - Some previous programming knowledge needed
Reviewed in the United States on 17 August 2017
Verified Purchase
It is very nice, good introduction. Very well formated and very easy to read. Clear charts and designs, sharp printing.
There is no need to be a tech expert to read it, but some knowledge around programming and some notions of computer inner working is a plus, that will help for sure.

No doubt that woth the money if you like the subject. It is more for a relaxing reading around the subject.
Read more
2 people found this helpful
Helpful
Sending feedback...
Thank you for your feedback.
Sorry, we failed to record your vote. Please try again
Report abuse

James Dittrich
5.0 out of 5 stars This is the book I wished that I had in ...
Reviewed in the United States on 1 April 2017
Verified Purchase
This is the book I wished that I had in my teens, before ever setting foot in a college CompSci class - it would have provided me a lot of direction into the core concentrations required to master the knowledge domains required. This is a thorough, accurate, and realistic depiction of the state-of-the art in the field, touching a huge number of topics. Very few books are as practical and hands-on as this one, it is a real standout. I am faculty at the University level, I have read more than a few. This book would be very appropriate for most gifted or extremely self-motivated high school students, competitive robotics teams, hackathon hackers, and serious undergraduate college students. Highest recommendation.
Read more
7 people found this helpful
Helpful
Sending feedback...
Thank you for your feedback.
Sorry, we failed to record your vote. Please try again
Report abuse

Gary W. Price
5.0 out of 5 stars This is a good intro to robot programming
Reviewed in the United States on 17 May 2018
Verified Purchase
This is a good intro to robot programming. Although you can get preprogrammed boards downloaded via RS232 interface, nevertheless one should not take that in place of learning how to program.
If you are into robot building, this is one piece of the puzzle you won't want to be without.
Read more
Helpful
Sending feedback...
Thank you for your feedback.
Sorry, we failed to record your vote. Please try again
Report abuse

Rob Gallagher
5.0 out of 5 stars Great Christmas gift.
Reviewed in the United States on 20 August 2019
Verified Purchase
Great Christmas gift, for my nephew. He really loves it.
Read more
One person found this helpful
Helpful
Sending feedback...
Thank you for your feedback.
Sorry, we failed to record your vote. Please try again
Report abuse

rfhamcom
5.0 out of 5 stars Five Stars
Reviewed in the United States on 13 July 2017
Verified Purchase
Excellent book to read if you would like the nuts and bolts info on robots.
Read more
Helpful
Sending feedback...
Thank you for your feedback.
Sorry, we failed to record your vote. Please try again
Report abuse