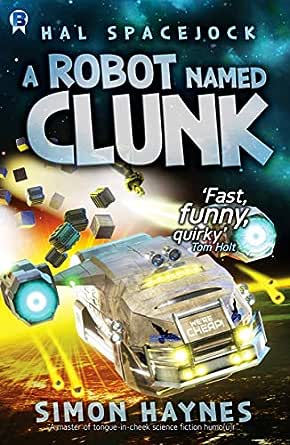 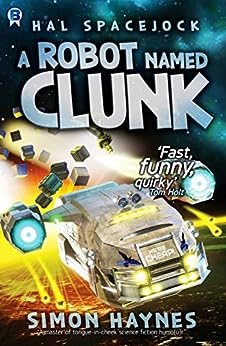 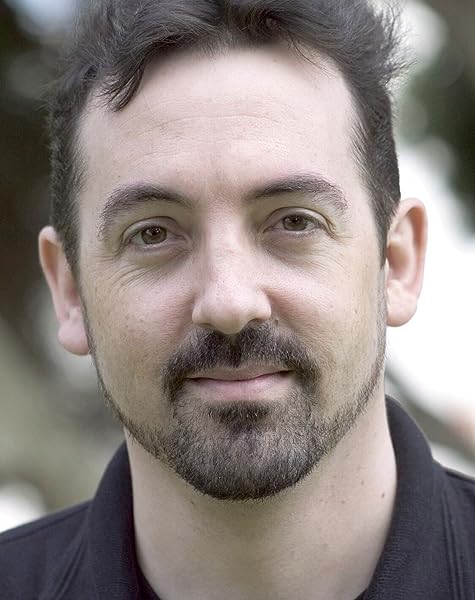 Simon Haynes is the award-winning author of the Hal Spacejock series and a founding member of Andromeda Spaceways Inflight Magazine.

4.0 out of 5 stars
4 out of 5
430 global ratings
How are ratings calculated?
To calculate the overall star rating and percentage breakdown by star, we don’t use a simple average. Instead, our system considers things like how recent a review is and if the reviewer bought the item on Amazon. It also analyses reviews to verify trustworthiness.

aussie bob
5.0 out of 5 stars Robots of the universe unite!
Reviewed in Australia on 31 July 2018
Verified Purchase
This book has done more to rekindle my love of Sci Fi than any other since I read Jules Verne as a very small child 50+ years ago.
A robot as the central character and a bumbling human (a cross between Luke Skywalker & Hahn Solo) really adds to the joy. Add in some interesting baddies, some hilarious fight scenes and the bottle wee-ielding valet parking kids and you have a book worth getting hold of.

Now that I’ve finally discovered this author I’m looking forward to reading many more if his books. Enjoy! I certainly did.

Anne - Marie Pletcher
2.0 out of 5 stars I tried
Reviewed in Australia on 10 August 2018
Verified Purchase
I very rarely give up reading a book but this has joined my forever unfinished list.
I gave it 120 pages and it gaved me nothing.
I didn't find it funny .
I t wasn't really scifi either.
The characters were cliche and story moved at a snail's pace.
I believe further books in the series at better but I'm not tempted to try anything else from this author .
Read more
Helpful
Comment Report abuse

R. N. Thomas
2.0 out of 5 stars Author's Not Up to the Challenge
Reviewed in Australia on 8 July 2019
Verified Purchase
The author tried to be humourous but wasn't up to the challenge. The story starts ok but quickly descends to a crawl as it progresses. The author may have had a chance if he kept this to a short story.

The author has obviously read Hitchhiker's Guide to the Galaxy and wanted to emulate the style. He didn't seem to notice the clever writing and engaging characters. He's got the oddball plotting but nothing else going for the story.
Read more
Helpful
Comment Report abuse

beverley
5.0 out of 5 stars Funny enjoyable quirky an all around good read
Reviewed in Australia on 27 August 2018
Verified Purchase
Fast paced very enjoyable reading the plot was just enough drama and light humor twisted together to make it a pleasant read before bed
Read more
One person found this helpful
Helpful
Comment Report abuse

Kindle Customer
4.0 out of 5 stars Ass addictive as a pinball machine, watching Hal bounce from one crisis to the next
Reviewed in Australia on 2 April 2019
Verified Purchase
Not sure what i expected, quite liked the plot and general story. i would recommend it as a fun read
Read more
One person found this helpful
Helpful
Comment Report abuse

RWheeler
4.0 out of 5 stars Hal is back again and getting into more hilarious scrapes!
Reviewed in the United Kingdom on 1 November 2020
Verified Purchase
Hal Spacejock is a useless pilot. He is also a useless freight carrier. He's a fool basically but a kind and loveable one.

He has no idea how to do anything. He has no possibility of getting a job because of his lack of skills. And to say his life is complicated by that is an understatement.

He has taken out loan after loan after loan and is still only just scraping by. Even being frugal with his credits and buying the cheapest of Everything, Hal is still just about managing to eat. And with no finances coming in from any work, He's up to his neck in serious debt.

He is totally out of credits and desperate for work, but his foolish pride keeps stopping him from taking paying jobs. As far as he is concerned, they are all crooked and therefore beneath him. That is until till a debt collector arrives at the airlock of the Black Gull. Thinking the debt collector is here to offer him the loan he recently applied for, Hal lets him in, only to be attacked by a huge, vicious robot called Brutus, while its debt collector owner, Mr.Vurdi Makalukar, observes. Vurdi tells Hal that he has one day to find the money he owes his client or Brutus will destroy the Black Gull and kill Hal!

Naturally Hal quickly gets hold of the man who wants him to move freight for him. The man, Mr. Jerling, wants Hal to pick up some freight from one planet and on the way he is to collect a robot pilot named Clunk that belongs to Jerling, and drop him off when at the freight collection point. Hal quickly agrees and sets off to find the planet where the freight is. Unfortunately things don't go smoothly for Hal or Clunk. Everything goes badly from the start.

Hal Spacejock is naturally funny as a character but when Clunk is added into the mix it's hilarious.

These stories have great plots and the comedy aspect is very much like watching a slapstick comedy of the Laurel & Hardy type, but in space! Literally nothing goes to plan and all poor Hal and Clunk can do is hang on for dear life and fear for their fragile futures.

The effortless style of this story is what makes it so good. It's funny, but it's more than that. It is charming in a cosy mystery kind of way and full of many faceted characters that I have come to really like, especially Clunk. He's adorable and yet brilliant. Undervalued by Jerling as an old make of robot but highly valued by Hal.

I love this book and the series. If I was trapped on a desert island with nothing but a choice of books, this would be in my top three books of choice.
Read more
Report abuse

Mr C
4.0 out of 5 stars I don't do book reviews......
Reviewed in the United Kingdom on 20 April 2019
Verified Purchase
I don't do book reviews like you keep seeing, as I find that some give too much of the plot away and I personally hate that, as it makes the book not worth reading. I much prefer to take the authors back cover write up as a review as it can either intrigue you enough to read the book of provide you enough information to make you decide that the book is not for you.
My review rules are: The more stars, the more I liked it.
If there are too many typos or errors the less stars I give
If the storyline or plot is poor or contains too many errors, the characters are too weak, the ending lacking something, then the less stars I give.
Simple, uncomplicated and to the point without giving anything away.
Some of the books I read have been given to me by the author as a pre-release copy and this does not bias my reviews in any way
Read more
One person found this helpful
Report abuse

Booky Matelot
5.0 out of 5 stars Slow start then it grabs you.
Reviewed in the United Kingdom on 7 May 2018
Verified Purchase
To be honest, I was looking for an infill between the fabulous "Space Team" series, and Amazon came up with this as a "recommended". I am very pleased they did! Starting fairly slowly, as is the way when trying to "infill" characters, it was soon pretty obvious who was the clown and who was going to save the day! Hal and Clunk respectively. The Navcom is also a master-stroke. Another reviewer said Red Dwarf, Lister, Hryton and Holly were a good simile, and on the surface, its a pretty good analogy. The humour is dry, and there are sneaky side references that hit you after a couple more lines where you stop reading and "Say what?" All in all an enjoyable read, and the series does improve markedly. I'm upto #7 now, but can't understand why #8 isn't on Kindle Unlimited. Authors get paid by download and pages read, so why not? That aside, a good read and a great series :-)
Read more
Report abuse

Kindle Customer
5.0 out of 5 stars What a hoot.
Reviewed in the United Kingdom on 17 June 2018
Verified Purchase
I could not put the Kindle down, the book just flowed and made me stay reading until I had finished it. I was sad when this happened as I wanted it to just go on.

Be warned, there were several places where I laughed out loud. That is rare and added even more to my enjoyment of the book.

I can't wait to read the rest of the series and his other books.
Read more
One person found this helpful
Report abuse

S.Reid
4.0 out of 5 stars Great new addition
Reviewed in the United Kingdom on 3 August 2019
Verified Purchase
A nice solid 4 stars the humour isn't as good as say Red Dwarf but the idea and the situations that Hal faces are very simliar.
Hal and Clunk make a good due even if both are slightly to totally clueless .
A pretty good intro for the series and one which will keep my eyes out for more from this author.
Read more
Report abuse
See all reviews
Get FREE delivery with Amazon Prime
Prime members enjoy FREE Delivery and exclusive access to movies, TV shows, music, Kindle e-books, Twitch Prime, and more.
> Get Started
Back to top
Get to Know Us
Make Money with Us
Let Us Help You
And don't forget:
© 1996-2020, Amazon.com, Inc. or its affiliates