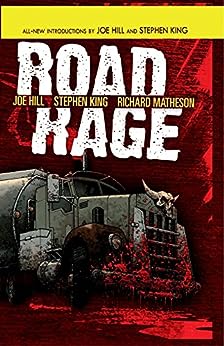 Acclaimed novelist/Eisner-winning graphic novelist Joe Hill collaborated with his father, Stephen King, in Throttle, for the first time on a tale that paid tribute to Richard Matheson's classic tale, Duel. Now, IDW is proud to present comic-book tellings of both stories in Road Rage. Adapted by Chris Ryall with art by Nelson Daniel and Rafa Garres.
Read more
Previous page
Next page
Due to its large file size, this book may take longer to download
Kindle e-Readers
Kindle Fire Tablets
Free Kindle Reading Apps
Available on these devices

Stephen King was born in Portland, Maine, in 1947, the second son of Donald and
Nellie Ruth Pillsbury King. He made his first professional short story sale in 1967 to
Startling Mystery Stories. In the fall of 1973, he began teaching high school English
classes at Hampden Academy, the public high school in Hampden, Maine. Writing in
the evenings and on the weekends, he continued to produce short stories and to
work on novels. In the spring of 1973, Doubleday & Co. accepted the novel Carrie
for publication, providing him the means to leave teaching and write full-time. He
has since published over 50 books and has become one of the world's most
successful writers.

Stephen lives in Maine and Florida with his wife, novelist Tabitha King. They are
regular contributors to a number of charities including many libraries and have been
honored locally for their philanthropic activities.

Richard Matheson was the New York Times bestselling author of I Am Legend, Hell House, Other Kingdoms, Somewhere in Time, The Incredible Shrinking Man, A Stir of Echoes, The Beardless Warriors, The Path, Seven Steps to Midnight, Now You See It..., and What Dreams May Come, among others. He was named a Grand Master of Horror by the World Horror Convention, and received the Bram Stoker Award for Lifetime Achievement. He also won the Edgar, the Spur, and the Writer's Guild awards. In 2010, he was inducted into the Science Fiction Hall of Fame. In addition to his novels, Matheson wrote screenplays, including several Twilight Zone episodes, such as "Nightmare at 20,000 Feet," based on his short story. He was born in New Jersey and raised in Brooklyn, and fought in the infantry in World War II. He earned his bachelor's degree in journalism from the University of Missouri. He passed away in 2013.

Joe Hill is the #1 New York Times bestselling author of The Fireman, NOS4A2, Heart-Shaped Box, and Horns (which was adapted into a feature film starring Daniel Radcliffe). His book of short stories, 20th Century Ghosts, won the Bram Stoker Award and the British Fantasy Award for Best Collection. He earned the Eisner Award for Best Writer for his long-running comic book series, Locke & Key, featuring the eye-popping art of Gabriel Rodriguez.

Chris Ryall is the Chief Creative Officer at IDW Publishing and the co-creator of Zombies vs Robots with Ashley Wood. Ryall has also co-created and written Groom Lake, The Colonized, The Hollows, and Onyx, and has also written adaptations of stories by Stephen King, Clive Barker, and Richard Matheson. He is also the co-author of a prose book about comics, Comic Books 101, and has written comics based on the Transformers, the band Kiss, Mars Attacks, Weekly World News, and, currently, Hasbro's Rom. Ryall and ZvR co-creator Ashley Wood were nominated for the 2006 Eisner Award for "Best Short Story."

4.2 out of 5 stars
4.2 out of 5
88 global ratings
How are ratings calculated?
To calculate the overall star rating and percentage breakdown by star, we don’t use a simple average. Instead, our system considers things like how recent a review is and if the reviewer bought the item on Amazon. It also analyses reviews to verify trustworthiness.

B. R. Goodman
5.0 out of 5 stars Faithful Alternative to Spielberg.
Reviewed in the United Kingdom on 11 April 2018
Verified Purchase
We all know DUEL the film, this graphic novel sticks very closely to Richard Matheson's short story. The drawings look harsh and really convey paranoia, as though they might have been illustrated by Edward Munch!
Read more
One person found this helpful
Report abuse

Amazon Customer
5.0 out of 5 stars Fantastic book!!
Reviewed in the United Kingdom on 27 February 2022
Verified Purchase
Really quick on arrival
It's a great book for a fan or even as a new read
Read more
Report abuse