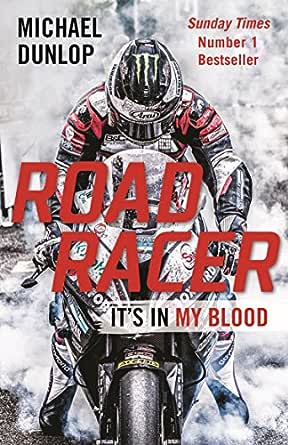 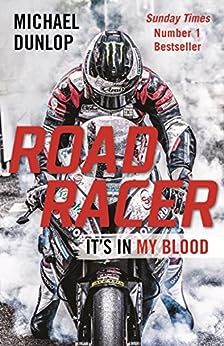 Road Racer: It's in My Blood Kindle Edition

"Gripping, undistilled, raw, gritty, uncompromising, pure and most of all honest, reading through Road Racer: It's In My Blood, is a thrilling journey." --Road Racing News

"One of the most moving and powerful things I've ever read about motorsport." --Autosport Magazine

"A captivating and brutally honest account of his life to date that goes deeper than any interview you've seen of the man on TV or in the press." --Motorcycle News

Michael Dunlop is quite simply the greatest road racer on the planet. Brother of William, also an accomplished rider, son of the late Robert and nephew of the late great Joey Dunlop, Michael can fairly claim that racing is in his blood. Now for the first time he talks in depth about his family story, how he got involved in the family business and how he manages to keep getting back on his bike despite all he knows of the deadly risks he encounters every time he crosses the start line.

Now with thirteen TT wins to his name Michael is a phenomenal competitor, and in this sensational autobiography he reveals the highs and lows of racing, what it was like growing up part of a motorcycle dynasty and how that made him the incredible racing driver he is today.

David Nichols
5.0 out of 5 stars When the flag drops...
18 July 2017
Format: Kindle EditionVerified Purchase
...the bull stops. Michael Dunlop lays it all out, warts and all, for an engaging look at how he paid his dues and proved his worth. Highly recommended.
Read more
Helpful
Comment Report abuse

Daniel O'Shea
5.0 out of 5 stars I am a bike nut
1 February 2020
Format: PaperbackVerified Purchase
A great Read didn't want to put it down
Read more

Western Wombat
4.0 out of 5 stars Great story
14 December 2019
Format: Kindle Edition
Honest account of the struggles of racing and the weight of a family name. Enjoyed this a lot, very likeable character.
Read more
Helpful
Comment Report abuse
There are 3 customer reviews and 4 customer ratings.
See all 3 customer reviews
Write a customer review

Whyaduc
4.0 out of 5 stars A Decent Story With a Slow Start, Good Finish.
29 March 2018 - Published on Amazon.com
Verified Purchase
Michael Dunlop is my favorite road racer who is currently active. i love his style of riding and his family heritage. A young man in his 20's only has so much to write about in an autobiography. The 280 pages of this book is a stretch to fill with interesting writing. The first third of the book regarding his youth was a tough slog and not very interesting, not what I signed up for. OK, he was a bit of a scamp; who wasn't? The remainder of the book saved the day. I found it an overall interesting read with a slow start. If you are interested in the Dunlop road racing dynasty, Full Throttle by Liam Beckett, Robert Dunlop's mechanic and best friend is a better read IMHO.
Read more
One person found this helpful

Taylor
5.0 out of 5 stars THIS is the one you’re looking for!
18 January 2019 - Published on Amazon.com
Format: PaperbackVerified Purchase
I want to preface this by saying that I haven’t read a book front to back since High school. Many service manuals and bits and pieces here and there but never a full book through and through. I love motorcycling and had some spare time at work so i picked this up to thumb through. From “day dot “ i could not put it down.

What a ride it is! Learning of not only Michael, but the entire legend of the Dunlop name is inspiring and breath taking at times. The detail is amazing and there are some that I’m sure it was very difficult to put into words and it was done fantastically. The racing narrative is very well written and descriptive. The races played out in my head. I can’t recommend this book enough to anyone. I love knowing some of the proceeds of this sale went to Michael and his efforts.

Big Earl
5.0 out of 5 stars Modern day warriors
15 July 2019 - Published on Amazon.com
Verified Purchase
There are very few people on Earth who ride full out on city streets like Michael Dunlop. Not only is he part of an elite group he been the best of today's riders. His extended family history is motorcycle lore. Great read that could be completed in one session, I have intentionally took my time. Isle of Man TT and the Dunlop family go hand in hand.
Read more

j walk
5.0 out of 5 stars Great read.
31 January 2020 - Published on Amazon.com
Format: PaperbackVerified Purchase
Awesome book by a living legend. Fun to get some insight into how he thinks and get a glimpse of his true feelings and attitudes.
The race descriptions are fantastic and illustrate the difference between crazy and calculated.
A great read for motorcyclists of any discipline.

dcharnet
3.0 out of 5 stars Worthwhile In A Larger Context
30 March 2018 - Published on Amazon.com
Format: Kindle EditionVerified Purchase
The Dunlop family saga as depicted in the must-see film "Road" is almost mythic in the Joseph Campbell sense. As a chapter in that larger story, this is certainly worth the read. Michael Dunlop is absolutely worthy of the family name and tradition in terms of his skills. His limited insight and empathy for other racers becomes tiresome. One wished for a Surtees or even Hailwood to live the tragic and moving story and then tell it with more compassion, human interest and less childish ego. Be hyper-competitive, Michael, fine, but do grow up a little please.
Read more
One person found this helpful
Go to Amazon.com to see all 26 reviews 4.5 out of 5 stars
Get FREE delivery with Amazon Prime
Prime members enjoy FREE Delivery and exclusive access to movies, TV shows, music, Kindle e-books, Twitch Prime, and more.
> Get Started
Back to top
Get to Know Us
Make Money with Us
Let Us Help You
And don't forget:
© 1996-2020, Amazon.com, Inc. or its affiliates