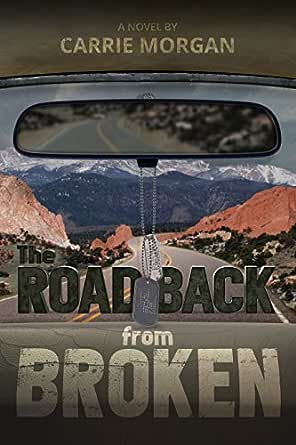 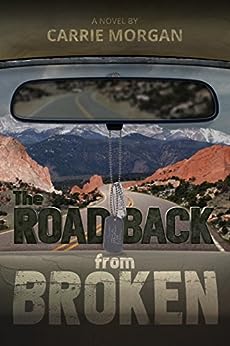 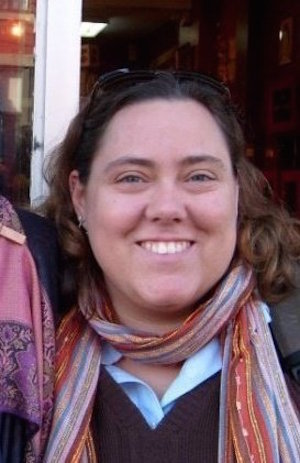 The Road Back From Broken Kindle Edition

A lawyer by training but a storyteller at heart, Carrie Morgan grew up in Littleton, Colorado but now lives in Florida with her husband, a U.S. Army infantry veteran. --This text refers to the paperback edition.

I’m not normally a fan of military fiction, I don’t personally have anything against the military; in fact, I have a lot of respect for the people who risk their lives to protect us; it’s just not a genre that I normally read. Both my Grandads were in the services during World War II but apart from that I don’t really come from a family with a military background and those types of stories have never really struck a chord with me. This was totally different though. Yes I suppose it would technically be described as military fiction but I think it would be doing the story a disservice to say that’s all it is. Ultimately, “The Road Back From Broken” is a story of a man with PTSD and how he is dealing (or not) with that. Yes, for our protagonist, Fitz, it is his service in Afghanistan, and in particular an IED attack that he survived but his friend did not, that has caused his PTSD but if you took the military aspect out of it the story would still stand so I think this is very relatable to a lot of people.

The military language used wasn’t too complicated to understand, I think anyone who watches the news would be able to follow it without any trouble but I also didn’t feel it was over explained so I think if you were from a military background I don’t think you’d feel like it was dumbed down.

“The Road Back From Broken” was extremely well written, I felt the characters were very well rounded and believable and the events described in the book were realistic and sensitively handled. We see Fitz struggle with to deal with his alcohol problems as he has been using alcohol to try and numb the emotional pain of his experiences in Afghanistan. Again, his struggle to remain sober was very well handled. Most people who have an alcohol problem do not just stop drinking overnight and never have any problems again. It is a daily battle for many people and sometimes they don’t feel able to carry on fighting. They might slip and fall back into bad habits and then have to pick themselves up and start the fight again. It’s something that media portrayals don’t always get right but in this case I think it was written very well.

I liked the use of flashbacks and memories to see what had happened in Afghanistan and what was causing Fitz to feel so much guilt.

The supporting characters were also very realistically written. I don’t want to say too much as I don’t want to spoil it for anyone who wants to read it for themselves but I know some people may not agree with the actions of Fitz’s wife, Jenn, but for me I think it was written just right. You can’t help a person who isn’t ready to help themselves and sometimes by being there and picking up the pieces all the time you are almost enabling them to continue in their destructive behaviour. Tough love does work in a lot of cases.

I would highly recommend this book, whether you like military fiction or not. It is an extremely interesting read and gave some insight into PTSD, whatever the cause, as well as alcoholism. As odd as it may sound given the subject matter it was also a very uplifting story. I don’t want to spoil the ending but the title is an excellent description, it very much is the story of Fitz’s journey back from the “broken” man he is when we first meet him.
Read more
Report abuse

Lachlan
5.0 out of 5 stars Incredible!
Reviewed in the United Kingdom on 23 October 2015
Verified Purchase
What a fantastic read. Couldn't put it down. The characters bleed into your soul so much so that you feel every emotion with them. Highlights the very real issues that can face veterans when they return from active service. A pleasure to read.....
Read more
Report abuse

Amber S.
5.0 out of 5 stars More than a military story, ROAD is a journey of healing that all can relate to.
Reviewed in Canada on 17 December 2015
Verified Purchase
One of the marks of a well-written novel (for me, anyway) is that the story taps into universal experiences and emotions in a way that transcends genre. For example: I'm generally not fussy on fantasy as a genre, but I do love certain works of fantasy. While Morgan's debut, The Road Back From Broken, is the story of a military family struggling beneath the weight of psychological combat scars, manages to both realistically immerse the reader in the American military and connect with broader experiences of isolation, guilt and the life events that forever change us.

Jacob "Fitz" Fitzgerald is, on paper, the ideal solider. Special Forces, Green Beret, decorated in combat and highly respected by his team. His family--wife Jennifer and son Ryan--understand the rhythm and flow of duty overseas and the return home. But the man they both said goodbye to has not returned home. His friend lost in battle, Fitz bears the scars of that horrific loss both within and without. Like many struggling with grief and trauma, Fitz chooses to self-medicate, pushing away the pain with bottle after bottle.

After a near-miss that threatens his family and his own life, his world crashes down, forcing him to hit rock bottom. He can either face the battlefield in his mind, or lose everything that matters most to him.

There are several things I absolutely love about this book. For one, despite my painful lack of background knowledge regarding the military, I never felt overwhelmed or confused by the jargon and protocols that shape Fitz's everyday world. Morgan deftly keeps conversations natural and action flowing, while finding ways to keep readers like me "in the know".

Secondly, as someone who has battled PTSD (and used alcohol as a coping mechanism), I found Fitz to be authentic in voice and action. This is a difficult task, as people who've never experienced the illness first hand often find accurate depictions to be at turns unlikeable or frustrating. But that's the thing: people coping with trauma can be very difficult to help. The nightmare that lives in the head and heart is difficult to see beyond or shake free of. Fitz's flashbacks are vivid, rich portraits of a world that has shattered around him, and they made me love his lost comrade as much as he did. This made Fitz's grief all the more palpable.

Last, but certainly not least, the secondary character of Remy, the army chaplain who becomes a trusted confidant during Fitz's struggle, is phenomenal. For me, books are far more satisfying when the secondary characters truly pop off the page and come alive, as opposed to remaining two-dimensional, tired tropes (e.g. the goofy best friend). Remy allows us to glimpse another side of Fitz, pulling threads of painful truth from the troubled soldier like taffy. Like any good friend, he is supportive, but also challenges Fitz when needed.

(I declare myself President of the Remy Appreciation Society and am accepting memberships.)

ROAD is a story of love, above all else: love of friends, family, and oneself. It is a journey back from the brink and a testament to what our servicemen and women endure abroad in the name of the countries we love, and an exploration of the way silence can only salt the wounds, while speaking up can set us free. Timely and touching on critical issues including the need for strong support mechanism for trauma survivors, as well as other issues I won't name so as to keep the final reveals as powerful as they were for me, it is a powerful debut from an author I will be following in the future. I cannot recommend it enough.
Read more
Report abuse

C. Townsend
5.0 out of 5 stars Beautiful Story of Recovery and Hope
Reviewed in the United States on 28 April 2016
Verified Purchase
If you have been to war or love someone who has been to war you owe it to yourself to read this book. In my lifetime I’ve read beautiful books and I’ve read important books. The Road Back from Broken is a rare combination of the two. The author even manages to pull off an equally poignant story within a story within the pages, a remarkable feat in and of itself. I loved the book and found myself reflecting on my own trips to faraway deserts. The story is a beautiful reminder that even though many of us came back broken, visibly or invisibly, we can heal. Like the Japanese art of kintsugi, the pieces can be put back together with a lot of work, and although the resulting work of art has scars from its tribulations it is more beautiful for those scars. This book reminds us that broken does not have to be an endstate, but rather the road back from broken is paved with the love of those around us. That love transcends all the hurt and all the scars and can bring us back to whole.
Read more
2 people found this helpful
Report abuse

Julie Roberts Towe
5.0 out of 5 stars Honest, Insightful, and Important
Reviewed in the United States on 23 March 2016
Verified Purchase
From the description, I expected to enjoy The Road Back from Broken. I had waited for months for its publication with high hopes that the unique characters would carry me along with them on an emotional journey, and it delivered just that. But I was surprised by the great detail Carrie Morgan incorporated into her storytelling. The amount of research she put into writing The Road was an unexpected gift to me as a reader. I learned a lot about the military, both past and present. Don't let that put you off if you aren't into military novels because The Road does not exactly fit into that category. It carves out its own category by incorporating many, which might be evident by the diverse reviewers here. No matter which community you are in, there is a truth in The Road relative to your life. All of these different strands of interest weave through the story effortlessly without feeling forced, which is how life really is. I recommend this book often and with confidence that it will be equally loved by others.
Read more
One person found this helpful
Report abuse
See all reviews
Back to top
Get to Know Us
Make Money with Us
Let Us Help You
And don't forget:
© 1996-2021, Amazon.com, Inc. or its affiliates