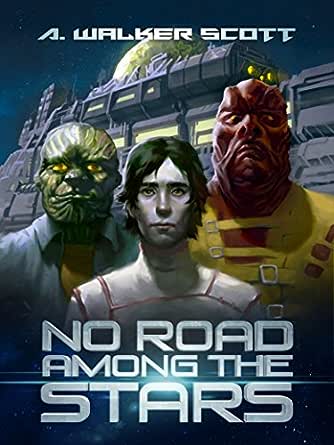 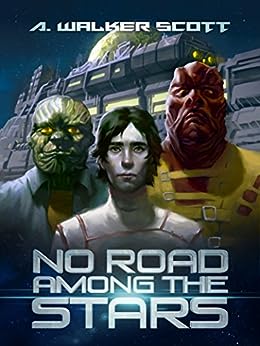 No Road Among the Stars: An InterStellar Commonwealth Novel Kindle Edition

University student David Asbury trusts no one and wants nothing more than to be left alone to study alien languages. For three years he has managed just that as an undergraduate at Shel Matkei Academy. But his scholarship, which is his only means of support as an orphan, requires him to become a diplomat in the InterStellar Commonwealth.

Now he's on a team of aliens learning how to broker peace treaties and trade deals. Some of them hate him. Some just think he's strange. And one won't let him hide away and waste his life.

Just when David decides there's reason to hope for a better future in this world of codes and customs, everything falls apart.

More alone than ever, David now has to fight his way to justice, with all the odds, and some very powerful aliens, arrayed against him. But even solving the mystery of who is responsible may not be enough to put the pieces of David's life back together.

A. Walker Scott's love for science fiction was born one dark night, at a drive-in movie theater, when the words "A long time ago, in a galaxy far, far away" scrolled up the screen. Now he is a lightsaber-wielding Browncoat with an IDIC on his lapel. He will read any novel with a good alien, twice if it has an alien language! He has taught English in Taiwan, awakened in the wrong city in Romania, and done linguistic and cultural fieldwork in Solomon Islands. And he has been creating his own languages since just before his 12th birthday. He collects far too many collections, and the books have started reproducing on their own. He lives in a sleepy Texas suburb, where he writes about aliens while listening to Bach fugues...when not rendering homage to a pack of slobbery Basset hounds.
click to open popover

Adam David Collings
4.0 out of 5 stars Character-Driven Sci-fi with Cool Aliens
28 April 2019
Format: Kindle EditionVerified Purchase
A highly character-driven story of aliens and friendship. This book delves into various alien races, their cultures, and their languages. The author clearly loves the exploration of aliens and their languages, and this comes out in every page. The relationships between the characters grow and develop through the story, and take a front seat, over traditional plot elements that take more of a back seat here.

The one thing I didn't like about this book were the names. I'm not a fan of names that are difficult to pronounce. I understand that they made sense in the context of this story. They lend a degree of believability, and language was an important element in the book, but I struggled with them. I found that I had to invent my own names for the characters to say in my head whenever I came across one that I couldn't pronounce. With sufficient effort, I could have sounded many of them out and learned them, but honestly, I'm too lazy for that. I sometimes found myself wishing the author would "buy a vowel" or two. All this said, it was worth persevering with the names for the sake of the characters and the story.

All in all I enjoyed No Road Among the Stars and would definately welcome more books in this world. Recommended for lovers of science fiction with lots of alien races.

No Road Among the Stars gets a solid 4 from me. I really liked the story, and the characters. Some great stuff in there about friendship and celebrating differences.

The plot was a little slow, but it's appropriate for this type of story, and it was a fun story to settle in and enjoy.

If you like stories about aliens, and differences in species, and especially if you like languages, you'll love this book.

TermiteWriter
5.0 out of 5 stars “There are more things in heaven and earth, Horatio, than are dreamt of in your philosophy.”
7 July 2018 - Published on Amazon.com
Format: Kindle EditionVerified Purchase
This is a book about aliens, and about humans, and how they are different and how they are alike, and how they can learn to know each other. It’s about disparate cultures and what can happen when those cultures clash. It’s about the good people who can exist in all cultures, along with the evil ones.
First, to set the scene ... Some hundreds of years into the future, Earth has become part of the Interstellar Commonwealth, an association of planets inhabited by intelligent lifeforms. The ISC has set up a space station/university (the Shel Matkei Academy) where citizens of all worlds can go to study. This book focuses on the areas of language and diplomacy. David Asbury, a mistreated human orphan, is a linguistic genius, and a scholarship to the Shel Matkei Academy is his passport to freedom and the future. He doesn’t want to be a diplomat – he only wants to study languages – but he gets forced into joining one of the “pods” at the Academy, groups of miscellaneous aliens who play a computer game among themselves with the purpose of learning how to deal diplomatically with each others’ species in the real world. Each pod has to have a linguist, and Green Pod is in dire need of a person with David’s skills in order to break the code of Violet Pod and reestablish Green Pod’s power and credibility. Not everybody plays the game honestly, and Violet Pod is headed up by the real villain of the piece. This has the potential to lead to violence.
The plot is a bit episodic, particularly in the early going, but when I came to Chapter 9 (Sing Not Oh Stars), that’s when I knew I had to give the book 5 stars. In this chapter the members of Green Pod read poetry from their own cultures to one another (David reads from Hamlet). We learn so much about these aliens in the ensuing discussion. Of course, A. Walker Scott had to write all this alien poetry, and it’s amazing stuff. There is another chapter where the participants introduce the others to their indigenous music, but for me the poetry chapter is the best.
Some of the aliens are unique in SF, I dare to say. The Tvern An, Dvarin Tkal, who becomes David’s close friend, is vaguely reptilian, having green and yellow stripes and golden eyes, but others are much more bizarre. Dai-Soln, who often plays the voice of reason, is notable for his expressive frondlike eyebrows. Xtp is an insectoid who speaks a vowelless click language. Enemwenu is a three-legged cephalopod, whose people have 5 genders. And it gets even weirder and more fascinating. There is a gentle-souled, three-winged butterfly who hovers about. And then there is Red-Shimmer Gold Streak, an Iridian, who speaks a color language like a cuttlefish but looks like a boulder that tiptoes around on many tiny legs, a bit like the walking box in the Disc World books. She’s one of my favorite characters.
And then there is Gronorgh, who is David’s principal nemesis. He is a huge Gravgurdan who is reminiscent of the Klingons only perhaps more so, and he despises David for being small and weak and supposedly cowardly. I’m going to quote a description: “Gronorgh crossed rippling, corded forearms like gnarled mahogany tree trunks over his massive chest and made that gravelly Gravgurdan laughter sound. ‘Looks like there’s some fire mixed with his water after all. Beware lest you die in your sleep, Tkal.’ Then he laughed like an avalanche of ringing pebbles.”
The relationship of David and Gronorgh leads to one of the strangest events you’ll ever encounter in SF – a duel using a weapon that you would never in your wildest dreams think of. I won’t play spoiler by revealing what it is, but it certainly goes to prove what an original imagination A. Walker Scott possesses.
It should be mentioned that Scott is a terrific and prolific conlanger (creator of constructed languages). He’s worked out most of the languages referred to in the book in greater detail than can possibly be revealed in a novel.
This is character-based science fiction, my favorite kind, and the characters all grow as they learn about and from one another and experience adversity together. They become part of each other – David absorbs a little bit of the Gravgurdan and becomes stronger, and Gronorgh actually begins to understand that the human perspective has merit. It’s a great story, and there will be additional volumes about the Interstellar Commonwealth and its remarkable inhabitants. Can’t wait. Strongly recommended!
Read more

Lelia Rose Foreman
5.0 out of 5 stars Lots of fun
2 July 2018 - Published on Amazon.com
Format: Kindle EditionVerified Purchase
I had so much fun reading this. There were places I cried, places where I laughed, and in all places I felt the sense of wonder I look for when I read science fiction. The author shows how there can be a lot of excitement and tension without explosions. If all you want is explosions and laser sword battles in your sf, this is not the book for you. If you want aliens (lotsa aliens) and clash of culture (lotsa clash) and buckets-full of how aliens might think, then this is the book for you. Oh, yeah, and culture exchange night is hilarious. It is going to be hard to wait for the next book.
Read more

Wolf McTavish
5.0 out of 5 stars An enjoyable well paced story were you fall in love with the characters.
22 June 2018 - Published on Amazon.com
Format: Kindle EditionVerified Purchase
No Road Among The Stars was a really enjoyable read. A space opera of sorts, which focus on alien languges and cultures. There was some really good world building and as a whole it reminded me a lot of Hyperion by Dan Simmons. It’s packaged with ideas that provoke wonder, any of the various alien cultures and languages we come across in the University were the story is set are well thought through, and the story also raises a few philosophical and theological issues which makes you think deeply.

Character building and dialogue is excellent, and I loved the 'Cultural Exchange' class where the team (the main characters) selected various poetry and music from their own culture and discussed it.

In doing this the book also continues on The Great Conversation in that it refers to Shakespeares play Hamlet, along with other cultural references including a vague reference to Hitchhikers Guide to the Galaxy.

An enjoyable well paced story were you fall in love with the characters.
Read more

Susan J. Donetti
5.0 out of 5 stars Truly unique characters.
15 August 2018 - Published on Amazon.com
Format: Kindle EditionVerified Purchase
I thoroughly enjoyed this novel. It is intelligently written, has some very unique characters and the languages were fantastic. It isn't what some would call a rip roaring adventure, but I'm good with that. There was plenty of tension and kept me reading. The characters and their interaction as well as the political intrigue were the main draw for me.
Read more
Go to Amazon.com to see all 14 reviews 4.9 out of 5 stars
Get FREE delivery with Amazon Prime
Prime members enjoy FREE Delivery and exclusive access to movies, TV shows, music, Kindle e-books, Twitch Prime, and more.
> Get Started
Back to top
Get to Know Us
Make Money with Us
Let Us Help You
And don't forget:
© 1996-2020, Amazon.com, Inc. or its affiliates